The Rebirth excellence continues! A lot of big titles hit the shelves from Aquaman to Wonder Woman. Also this week is the last chapter of Edge of Oblivion. But is it a last hurrah, or more of a final nail in the coffin? 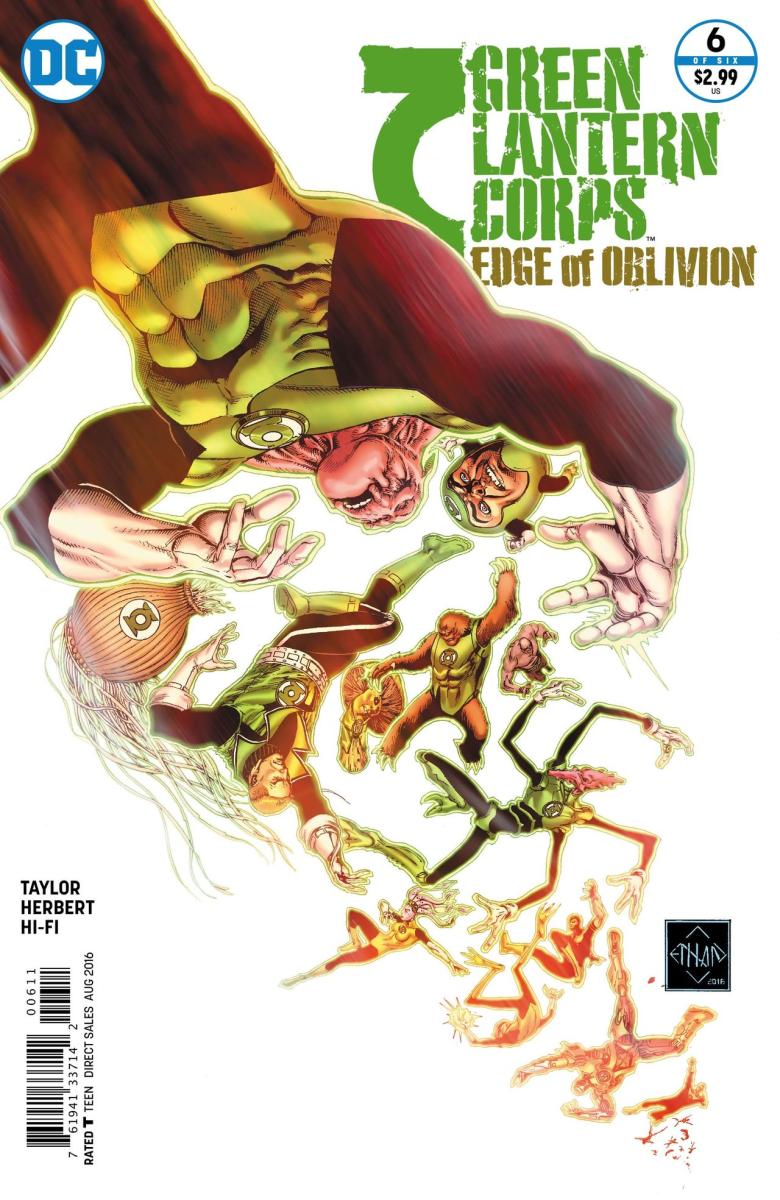 The final chapter in an oft-troubled series. I have taken no pains to disguise the fact that Edge of Oblivion has not been my favourite series. It was never really going to go to fantastic places, having spun out of another rather mediocre limited Green Lantern Corps series. When the premise of your story is that the universe is literally ending in a few days, there are only a few places you can go. The last couple of issues have been a bit of a step up, but it still can’t erase the taste of the first few which undoubtedly stunk. I’m incredibly curious as to how Tom Taylor expects to conclude such a story in one issue without actually killing the entire corps or resorting to deus ex machina. Or worse, rushing the whole thing and still not giving a satisfying conclusion.

A surprisingly emotional finale that almost redeems the series’ lackluster beginnings. Previously, Asuras and Dismas had revealed their true, tentacled forms, promised to devour the universe and a battle of epic proportions was set to commence. And that was, admittedly, what we got and what I expected. What I did not expect was a mildly thoughtful narration on the Green Lantern Corps sacrifice. It really helps to lend a little more weight to the final few pages and so when the Corps (inevitably) cast themselves into the glowing rift at the end of the universe, there’s a little bit of genuine sadness. Taylor seems to have taken a moment to really reinforce that at the end of the day the Green Lantern Corps members are all heroes willing to do what’s right. And it makes for a perfectly pleasant read. The story is of course let down by a mild piece of Green Lantern related deus ex machina that has reared its head before. Namely, with enough will, anything can and will happen. On top of that the art can at times be a little messy with a few battle scenes descending into blurry, muddy confusion. It does unfortunately distract from what is otherwise a decent closer to an incredibly uneven mini-series. 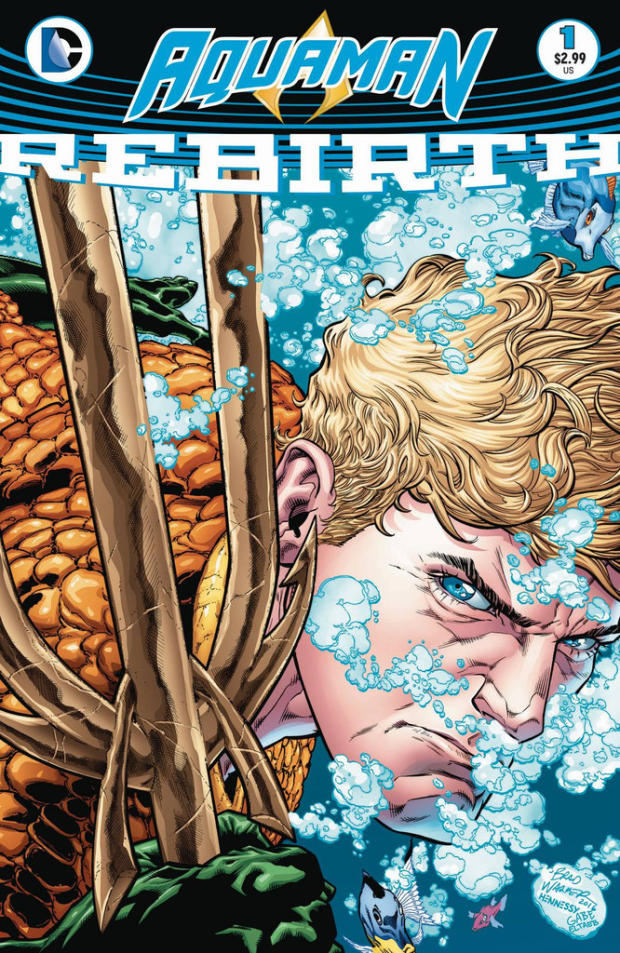 I’ve covered this in some detail previously, so I won’t harp on too much. The skinny of it is that Dan Abnett is a highly regarded sci-fi writer and his interpretation of Aquaman is bound to be fabulous. Expecting many great things here.

This is the exact sort of issue I’ve been expecting from DC Rebirth. Opening on Aquaman pursuing an Atlantean terrorist cell, Aquaman: Rebirth is an unseen narrator’s ruminations on who and what Aquaman is. As someone who hasn’t read a lot of Aquaman, I now have a (I think) solid understanding of his character and his rough place in the world. Abnett uses the issue as a place to briefly catch up new readers and also start setting up new story arcs. He even goes so far as to acknowledge that yes, a lot of people think of Aquaman as ‘the guy who talks to fish’. What I also particularly liked the handling of Aquaman and Mera’s relationship. She came across as a near equal to him and a brief moment they share at the end (which I won’t spoil) really cements their relationship and makes me genuinely care. I want them to stay together and be happy. Aquaman: Rebirth works so well because it’s a strong portrayal of the character. But, it’s an equally as strong portrayal of the world he lives in and the wider sense that it gives the reader is a great strength. Dan Abnett has me very excited for more Aquaman. 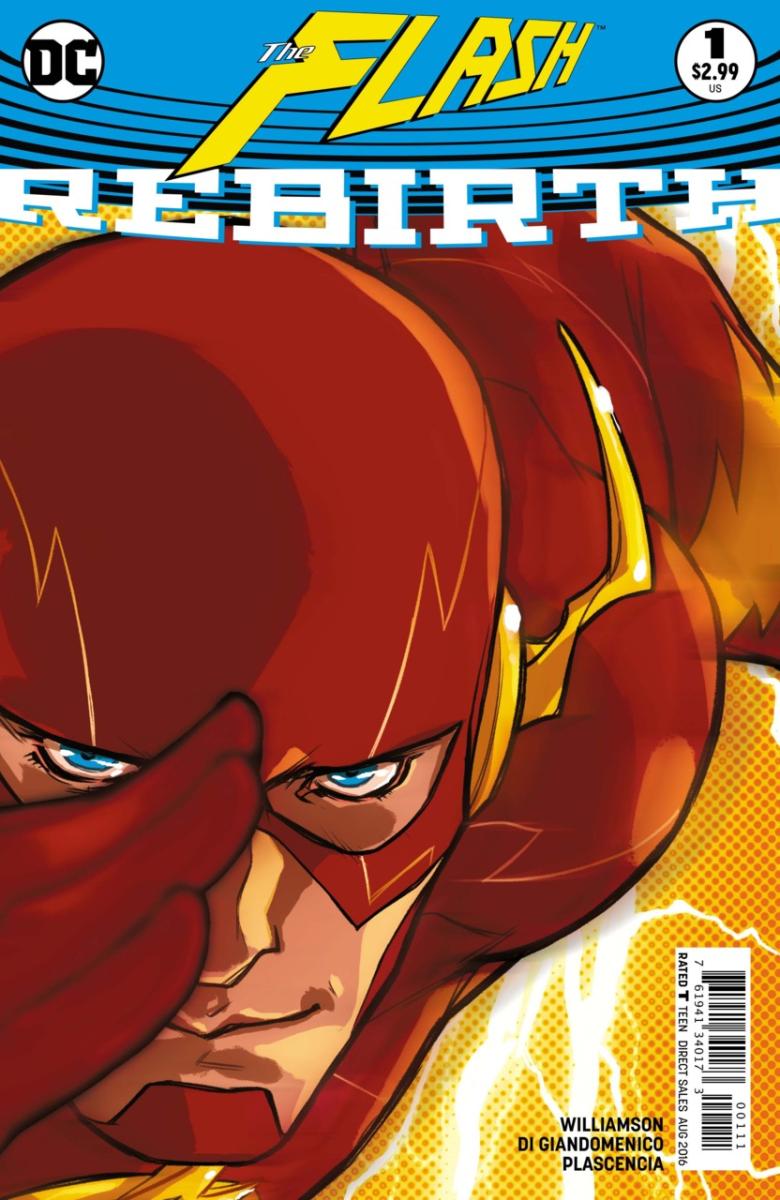 I started my investigations into Rebirth totally uninterested in The Flash. When I saw Joshua Williamson’s past books however, I was confident that The Flash would be one of the books to get. Like Aquaman, I’ve already talked pretty extensively about him, but rest assured this should be equally as cracking.

A tad jumbled, but still a solid foundation for not only The Flash but also the wider mystery of the DC Universe. The issue opens on Barry Allen at a fresh crime scene that bears an eerie similarity to his mother’s murder many years before. What follows is somewhat similar to Aquaman: Rebirth; a look at who The Flash is and a look back at what’s made him who he is. The Flash: Rebirth is a little more introspective than other Rebirth issues. Namely in that Williamson isn’t so concerned with giving the reader a sense of the wider world of The Flash, so much as he wants us to understand who The Flash is and how he feels about things. It’s a great approach, makes the story feel more personal and really fits the character of The Flash; a hero who I’ve always seen as being a little more personal than the others. Muddying the waters a little bit for Joshua Williamson is the return of Wally West and the investigation into what caused the trouble the DC Universe is now facing. While it is great to see an acknowledgement of a huge plot point for the DC Universe, it does kind of take away from a comic that is primarily intended to be about Barry. That aside, The Flash: Rebirth is a solid introduction to the character, if not the world, of The Flash. Glad I picked this one up. 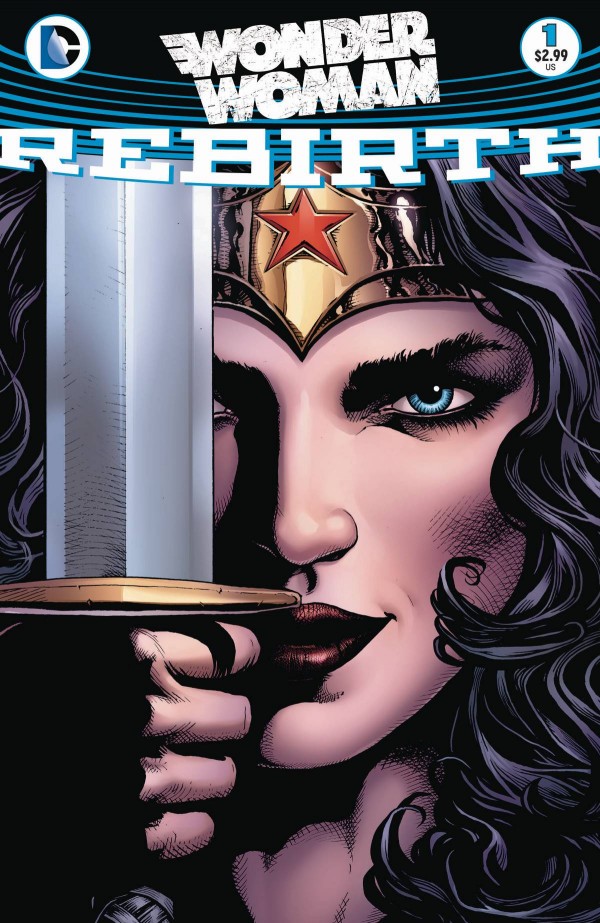 Astronomical, most likely too high. Greg Rucka is regarded as one of the best Wonder Woman writers around (as I said before), and this series will most likely become one of DC Rebirth’s best.

I’m not sure how to call this one. It was good, don’t mistake me, and I’m very excited to read what comes next. It was also very, very weird. A central theme of Rucka’s run has been reported to be who exactly Wonder Woman is. After her origin was (to the outrage of many fans) retconned, he’s promised to delve deeper into the truth about her past. And Wonder Woman: Rebirth does just that. Sort of. It’s fairly clever in that it acknowledges the multiple origins of Wonder Woman, presenting them as multiple memories that Wonder Woman herself possesses. As she attempts to recall her true past, the story switches back and forth until neither she nor the reader can really tell what the heck is going on. And in a way that is a strength and a weakness of Wonder Woman: Rebirth. It is totally unafraid to try and tackle deeper ideas than, say, Green Lanterns: Rebirth; but can also get a little lost in its own thoughts. However, with a strong message in the end about the nature of lies and the pursuit of the truth, Rucka does eventually tie the whole thing together. If this kind of writing, and this level of fantastic art, is indicative of what’s to come for Wonder Woman, I’d confidently say we’re in for a treat.