What’s the collective noun for books featuring ravens? A group of actual ravens is an “unkindness,” so maybe it’s a discourteousness, just to enhance the erudition?

Anyway, Ann Leckie, author of the Ancillary Justice trilogy, winner of the Hugo, Nebula, Arthur C. Clarke awards, and all-around excellent human being, is delving into fantasy! Her new book, complete with cover art, now has a release date and pre-order options: The Raven Tower, out February 12, which from the pittance of details I’m going to guess is at least tangentially related to Hamlet. 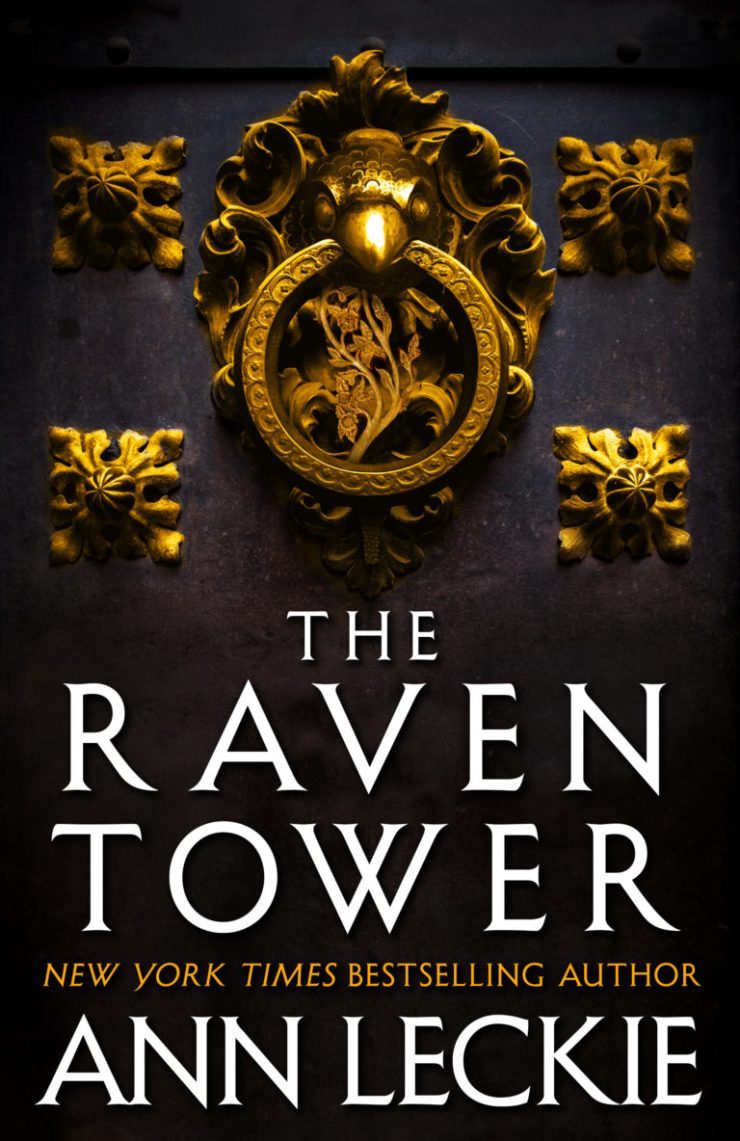 To tide you over, here are other books with Raven in the title:

The Raven and the Reindeer (T. Kingfisher) – A queer take on “The Snow Queen,” complete with bandits, a wisecracking raven, and a truly villainous ice witch. Kingfisher’s wry humor is always welcome, and her heroine is so real she might tromp off the pages at any moment, ready to strip off her snow boots and ask for some tea.

An Enchantment of Ravens (Margaret Rogerson) – This is a lovely and perilous romance between a mortal artist and an immortal fairy. Isobel, a canny portraitist, knows better than to desire the hollow delights of the fairy courts. Though suffused with beauty, the fey cannot experience emotion, and their favor can quickly turn sour. However, Rook is maybe, maybe not like the rest?

Conspiracy of Ravens (Lila Bowen) – Second in The Shadow quartet, Rhett has discovered his true self as both a shapeshifter and a transman, just in time for the supernatural battles to ramp up. There’s gunfights, a rail line conspiracy, and a hecking dragon in this wild wild west. One of the most diverse casts in SFF also takes time to examine and, where possible, correct some of the problematic tropes of westerns.

The Raven Boys (Maggie Stiefvater) – First in a quartet about preternatural prep school boys searching for a dead Welsh king (in Virginia), this book is a classic of YA. Blue, daughter of a local family of psychic women, initially resents the privileged sons of fortune, but gradually gets swept up in their quest. Myths, dreams, and magic abound.

Sisters of the Raven (Barbara Hambly) – I loved this book growing up. Aside from Dune, there was basically nothing middle eastern to be had in SFF, and the departure from a Western fantasy setting was a breath of fresh air. Sun magic is fading in the Yellow City, and Raeshaldis, the only girl to ever be admitted to the school of mages, wants to find out why. But she’ll have to fight through centuries of accumulated sexism as well as a conspiracy to discover the cause. Fortunately, hers are the only powers that aren’t fading, and epic magic battles ensue.

The Raven Stratagem (Yoon Ha Lee) – Space opera with ghosts, or specifically the ghost, singular, of a mad genius tactician, emphasis on the mad. The trilogy is finished now, so there’s no better time to get into these books that really blaze a new trail for military SF.

The Raven’s Shadow (Anthony Ryan) – technically the title for a series and not any one of the books, this is one of those rare success stories of self-publishing. Anthony Ryan’s work is excellent, and follows Vaelin Al Sorna on a convoluted, emotionally wrenching path to redemption. It’s epic.

Tower of Ravens (Kate Forsyth) – Despite having a near-idential name to Leckie’s upcoming project, I doubt there will be many similarities. Set in a mythical, magical version of Scotland, Rhiannon is a part-fairy girl who has to learn how to function among humans even while being pursued and condemned. The dialogue reproduces Scotish brogue so you may be thrown off, but like her Witches of Eileanan series, Rhiannon’s books are are fun, solidly 90’s fantasy.