Winter of the Witch proves, as few trilogies do, that the hat trick is possible. Three books without any deviation from the stellar quality of the first, each with a unique story and meaningful resolution, but also character and plot development across three books and a satisfying grand finale. Put it like that and it’s hard to see how anyone can manage it, but Katharine Arden pulled it off with élan. This is one of the rare pitch-perfect books in which the emotional drama keeps pace with the action, making each skirmish that much more thrilling and devastating. There are also some George R. R. Martin-levels of character death, which upped the stakes for every encounter. 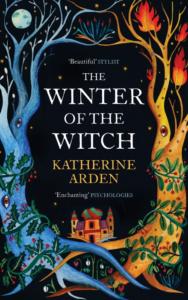 Her third installment featuring Vasya returns with the fledgling witch still in Moscow, the events of the second book still recent and raw. Previously, Vasya had defeated the sorcerer Koschei (aka Koschei the Deathless) and freed the firebird, setting fire to the city of Moscow in the process. Fire begets fire, and Vasya is soon in danger from old enemies and new, spirits and men. She is caught up in the symptoms of a much larger fight, and in this book she finally faces them head-on: she finally begins to tackle the seemingly insurmountable divide between the old faith (and gods) and the new.

In so doing, Vasya comes into the fullest realization of her powers, both magical and not. She braves some of the strangest lander her wanderer’s heart could desire, and she gets to test her mettle against some true horrors. I’d say she comes full circle, but really she comes full spiral, drawing around and around the powers she has been encountering since the first book, encompassing them and drawing them into her orbit. Her path grows increasingly wide, even as her focus narrows to a single—if huge—point: she must save her land and her people.

But what is her land, and who are her people? Are they her family alone, those who stand by her when others condemn her for her powers? Are they her allies, spirits of hearth and forest? Or can she and her magic do more, and make a place for her enemies as well? Already in the first chapters she is forced to make bargains with bad and worse, blurring a world she thought was purely good and evil. But it’s not just moral compromise that brings the book to interesting places. It’s Arden’s recognition of the potential for redemption and complexity that really enlivens this story. Even wicked things can be made to work toward benign ends, and even the damned can make good.

Vasya herself has mistakes to atone for, and the road is not easy. Arden does weariness and darkness well: Vasya’s slogs made me tired, but her determination made me determined to read on, too. I finished this book in less than a day. It was impossible to put down, sometimes quite literally, and I’m sure my husband got a kick out of watching me juggle a book, a cat, and a toothbrush. The only logical stopping place was midway through, where there was an abrupt change in direction. It’s not one I minded, but it was only lightly telegraphed, and therefore a bit jarring. In fact, the first half felt so much like a complete book, it took a little while to get back into the idea that the story wasn’t over, even though I was glad to have more time with Vasya and her companions.

The thread that holds the two halves together is the question of the chyerti. What will become of the old gods and spirits now that the new god of Christianity has spread so far and sunk so deeply into the fabric of Rus’? Everyone but Vasya is convinced that there must be battle and bitter loss. And Vasya must endure both before the end to convince them otherwise.

I appreciated that Arden gave subtlety and gradation to the faiths she depicted. Pagan and Christian did not equate with good and evil, nor even with accepting and exclusionary, respectively. There were many men (and a few women) of Christian faith, but some are warrior-monks, and some are gentle abbots, and some are just frightened townspeople. The same is true of those who keep the old ways, whether they have the second sight or not. Arden manages to convey the realities of dvoeveriye, dual faith, in all its pragmatic glory. Her world of Rus is vast and strange and wonderful, barely able to contain all the magic with which she infuses it.

Winter of the Witch comes out January 8.