The Signalman is waiting. The cultists are waiting. Time divides them, and a short, terrible burst of violence, but that’s not very much, in the scheme of this universe. They all want to know what happened–what is happening–in the desert, but only the Signalman knows enough to be afraid. Something the cultists will only learn if they’re lucky.

Agents of Dreamland crams in monikered agents of powers too vast and unknowable to have names at all; pawns who can only choose between acquiescence and violence; drugs that don’t so much obscure the line between sanity and madness as obscure the fact that you’re already on the wrong side of it; occupations or degradations that drive you there. All of it drawing on the Lovecraftian mythos (here it’s specifically Yuggoth, otherwise known as “the ones about the creepy sentient fungus”). Yep, it’s Caitlin R. Kiernan. 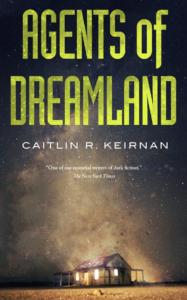 Perhaps fittingly for our current climate, this novelette is an unstable orbit around a center of weighty ignorance, a center that surely cannot hold. Neither the characters nor the readers are ever meant to know things. Suggestions are made, hypotheses tested, and actions are certainly taken, but they go from unstable ground to unstable ground, and some things–and people–just fall through.

It is in this that Kiernan truly is heir to Lovecraft in a way that most other writers are not. She is a scientist who has nonetheless made her uneasy bed with unknowing. For most of us, science connotes a background optimism that the world can be understood, and that there exists a path of upward momentum. In Kiernan’s works, we are reminded that even the experts know comparatively little, and that our striving will always fall short of this dying universe’s ability to confound us.

That makes it sound like the universe is active, like it or some animating god-force cares. Not so. There are only bigger and smaller fish in the vast ocean of unknowing, and all of them are hungry. Her stories are permeated, then, with a sense not of progress (or even narrative progression: it’s as if the linear story has splintered on the immovable force of that central ignorance) but of grim resilience. The characters, even when they take dramatic action, are merely enduring their circumstances. They lack the agency to be evil or virtuous: morality goes limp when the universe has no capacity to give a damn. Even the cultists–who in Lovecraft seemed maliciously intent on conversion or subversion–are ignorant or desperate dupes of a cult leader who himself knows so very, very little.  Their actions are momentarily heroic, but–she finds ever-more-poetic ways of reminding us–ultimately futile.

For humanity, that is. Something will go on growing in that cosmic morass, but we probably won’t see it coming or understand our own going. Yes, when Kiernan is touted as a horror writer, it’s for existential horror. For ice not so much down your spine as down the crevasse between the lobes of your brain.

I should mention that icy unease in Agents of Dreamland is a bit tame by her standards. I wonder if perhaps they got her to tone it down a bit and get a bit more obviously Lovecraftian because it’s a more mainstream press? Or perhaps the flaw is with me, since I’ve been following Kiernan’s career since I read Threshold back in 2002. Those who want to really experience Kiernan would be better off getting one of her short story collections to see her true range, but for newbies or Lovecraft fans this is a nice (creepy, unsettling) place to start.