Hobbes (the philosopher, not the tiger) was right about life being “nasty, brutish, and short,” especially when it comes to the middle ages in Europe. War, famine, plague and poverty were common, and Kate Heartfield didn’t flinch from any of it when building the world for Armed in Her Fashion. Rather than populate her book with ethereal fairies or saints, the fantasy elements of the book arise from and contribute to the nastiness: there are battlefields full of the dead, and when they rise up and walk, it isn’t to be redeemed, but to march straight into the mouth of hell. And the living don’t even have the luxury of panicking. They just have to find a way to survive.

Margriet and her daughter Beatrix, two working women of Bruges, know very well what it is to endure. They must remain at home—in a besieged city no less, living off rat meat and water—and wait for their husbands to return, dead or alive. The dead walk the earth around Bruges after all, thanks to the mysterious appearance of the hellbeast, a massive creature that can vomit forth armies of revenants and chimeras. 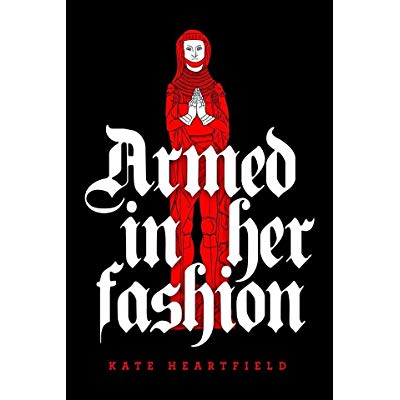 Something in Margriet breaks when she sees her undead husband return to her—only to look right past her and into his secret hiding place, where he had been keeping his spoils of war. He had been holding out on her! But he leaves before she can take even a single coin, let alone enough to keep them from starving. So she sets off after him, escaping the city with daughter Beatrix, ready to defy hell itself (quite literally) to get what is hers.

But Margriet isn’t the only one with a vested interest in her dead husband’s loot. The Chatelaine of Hell, the woman who commands the hellbeast, suspects he may have a precious key of hers. Claude, a mercenary and former prisoner of the Chatelaine, knows it for a fact, and wants to get it first.

The characters’ competing interests make for some interesting drama, including an unexpected detour to a courtroom in between the skirmishes. We see a very different side of medieval Europe than most standard fantasy in a similar period, since the characters are not fighters or kings. Their needs are simpler but their lives are more complicated, trapped as they are in professions and bodies that limited by tradition and convention.

For Claude especially, a transman, a body has always been a source of intermittent betrayal, but now more than ever. His arm, which was previously enhanced with a stolen magic mace, is now withered without it, unable to even hold a simple dagger. And on top of that, he’s divested of all his hard-earned armor (literally, but figuratively too) and forced back into women’s clothes. Suddenly everyone is extremely concerned with his genitalia and not with his exploits:

“Everyone always wants to know the most boring things. How I pissed. How I shaved. Nobody wants to know how I shot eleven soldiers with only ten bolts at the battle of Zappolino” (295).

Ultimately each character, in their own way, manages to circumvent or entirely defy the expectations placed upon them. And they do so by embracing themselves, regardless of whatever features other people deem flaws. Margriet, stubborn beyond belief, manages to take her singular will and transform herself into the final instrument of protection and success for her daughter. Beatrix, tired of obedience to others, finally decides on a path for herself. And Claude, given the chance to transform himself, makes a moving refusal: he is already perfect the imperfect way he is.

Although I found the culmination of most characters’ journeys satisfying, I was ambivalent about the Chatelaine’s ultimate end. While it was nice to have a female villain with compelling motivations, she was almost too sympathetic: I rooted for her success so much so that I almost didn’t want any of the other characters to succeed against her. After all, who doesn’t want to see an abused woman rise up and take power for herself?

Fortunately, the ending left space for at least some of the characters to have additional adventures. I would read any and all of those stories in a heartbeat. Heartfield’s medieval world is rich and real, even with its occasional unicorn-soldier or revenant. But even if no further stories are forthcoming, Armed in Her Fashion is still endlessly creative and pointedly clever. It’s a medievalist’s delight and any fantasy reader’s next favorite book.