We now have several reports of Lionsgate developing The Rook, a book about a British supernatural agency in crisis, into a Hulu series. Helmed by Stephanie Meyer of Twilight fame. Cue the screams.

Look, I’m thrilled to bits that The Rook is getting an adaptation. Daniel O’Malley deserves all the money that can possibly be thrown at him, and his debut novel would work really well as a movie or a TV series. It’s a fantastically brilliant work that was one of my favorite–if not my absolute favorite–book of 2012. There are conspiracies nested within conspiracies, and Lovecraftian horrors, and secret government agencies staffed by people with crazy powers, and a protagonist so desperately uncool that she goes all the way around to being badass. 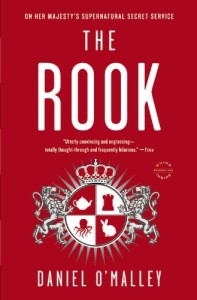 Oh, yeah, and I guess what they’re saying is true: Myfanwy Thomas is definitely a strong female character. I’m heartily sick of that term, though. So often it means “she’s Arnold Schwarzenegger but female.” No. She’s tough and brave in the face of some pretty daunting odds, but she also has quirks and weaknesses, just like a normal human. In particular, she’s very good with paperwork. So good, in fact, that she makes forensic accounting seem absolutely fascinating and terribly frightening. Now that’s a feat.

I’m surprised Meyer picked this book, since I was pretty sure she spent her days reading tearstained abstinence pledges and recipes for treacle. Maybe someone gave it to her and said “now this is feminism” and she thought “oh goodie another stirring tale of  romance,” because ten years later, she still doesn’t seem to grasp the meaning of the word.

She’s involved as a producer, so there’s a little hope. A hope, specifically, that they’re using her star power to create hype and controversy for the show, but actually putting it in the hands of competent writers. However, she’s famous, and she has opinions, and people will probably listen to them.

I guess she deserves some credit, though. She’s created a fear in me that I didn’t even know I had (by accident, but still): I now live in mortal peril of the time when The Rook introduces a completely unnecessary romance, turns Myfanwy into a simpering twit, and otherwise ruins a perfectly perfect book.