You know, I think YA has been trying to one-up itself of late. Ever since Twilight and Harry Potter bowed out of the spotlight, we’ve had more sick, unstable, unfortunate teenagers than you could previously Go Ask Alice about in all the preceding years. But now I think I’ve found the absolute pinnacle, the bloodred cherry on top.

I, gentle readers, have found a book about Cannibal Teens.

It sounds ridiculous doesn’t it? It sounds like an anime mocking the horror trope, the Ouran High School Host Club of Tokyo Ghoul. But it’s fantastic. Never ridiculous, never maudlin, never gory–it’s practically chaste. Oh, not like Twilight is chaste–it’s not wearing iron granny panties–but it’s shy. It doesn’t shock or taunt you with its strangeness; it always seeks to reconcile that strangeness to the natural and the mundane, with various horrifying results. 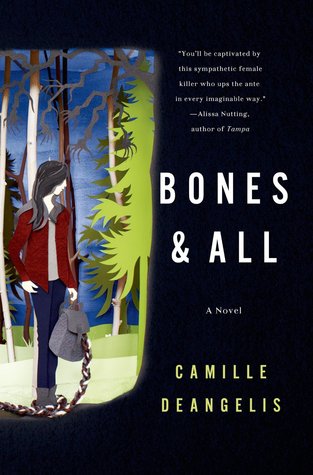 Maren is a moderately innocent (or perhaps naive) young woman who first ate a human being before the age of two. Her mother discovered her gnawing on her babysitter’s eardrum. Kids, right? They do the craziest things. So Maren’s mother has to pack her up and flee the area. And then she has to do it again. And again. Maren just can’t help herself. She tries to be good–tries to stick to herself, reading books and wearing black, all but begging to be ostracized–but there’s always that fatal mistake. And then one day, her mother can’t take it any longer. So sayonara to all of that, and Maren sets off to find her father, a mysterious figure she knows only from the name on her birth certificate. And along the way…well. There’s a boy, of course. And Maren begins to learn just how full the world is of monsters.

Anne Rice realized it before the rest of us, but it’s not that hard to get us to root for the bad guys. I’m not saying the writing itself is easy–may I be bitten to madness by rabid guinea pigs if I ever claim that–but especially now, people are more than willing to sympathize with the monster. Is this a symptom of dangerous moral relativism? Or perhaps a sign of burgeoning global compassion? Is it a symptom of our times, or is it basic human perversity, the same impulse that always liked gruesome stories?

Who cares? I mean, go ahead and hash this out in an English or philosophy class if you think it’ll help, or make up your own mind if you have nothing better to do. All I care about is whether you decide to read this book. And oh, you should. You so entirely, completely should. Read it for the brave sadness of a girl left all alone. Read it for the tense drama of Maren’s attempts to resist her nature. Read it for the suspicion and suspense of her interactions with other “eaters,” the ghouls she finds along the way and all her lonely, misshapen attempts to cobble together a family.

It’s brilliantly understated writing, never showy but definitely adept and making grim realities all too clear. Camille Deangelis is a marvel of understatement and implication. She knows just when to show, when to tell, and when to say nothing but give you a darkly meaningful look. And in the icky arena of cannibalism–not just that, of eating human beings alive–a little can go a long way.

There’s a bit of suspension of disbelief necessary when pondering the nature of the “eaters.” How can Maren and her mother get away with murders so completely? There is an attempt to explain, but it falls rather short. And how does a toddler consume a fully-grown adult? Do the eaters have inhuman strength, inhuman power? It’s unclear, but in other ways, I appreciate that. An eater’s choice of prey is unique, and the source of that craving is better when hinted at rather than spelled out. The same with the exact methods of their consumption. After all, this is a story about monsters, not heroes. You never really want them to get caught, but maybe you don’t want to look too closely.

As with Black Heart Red Ruby, it took a hell of a lot of gumption to write the ending to this book. But it’s so true. It’s true to the whole spirit of the narrative, and to have done otherwise would have been cheating. So brava, Camille Deangelis, you dark and grinning angel. Thank you for not holding back. Thank you for taking what could have been merely a gross gore-porn and elevating it to art that I will feel rather strange about cherishing next to all my other YA. But cherish it I will.