I stare at a building, more specifically, a bank building. Three floors, each containing a vault and stairs to the next floor. The unknown is what security measures are on each floor or which room that pesky security guard will peek at next. There is only one way to start this caper though, remove the shrink wrap. This is Burgle Bros. 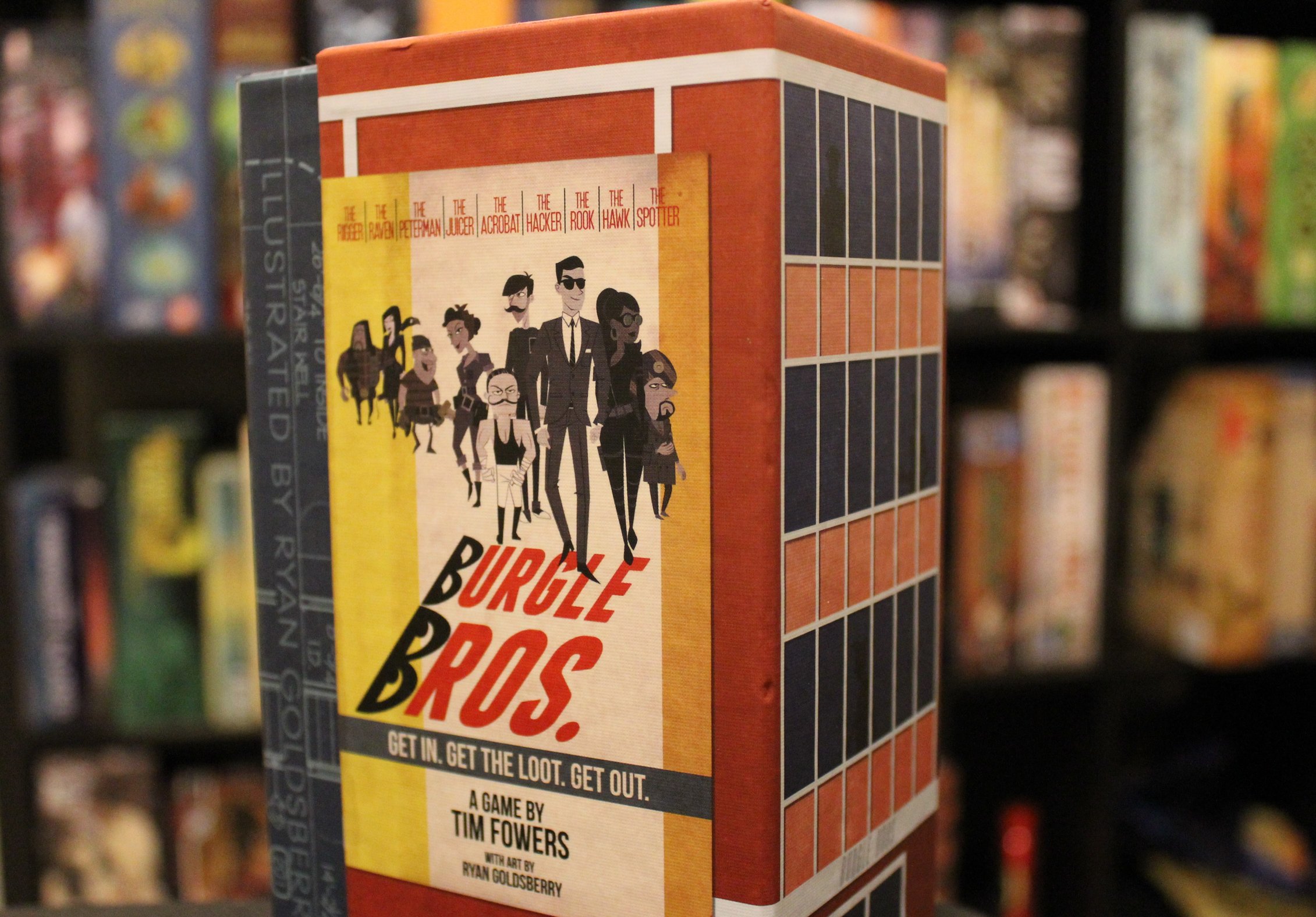 Catching your eye first is the amazing package. The box for the game is the literal building you are breaking into. Building sides are even plastered with movie posters advertising our cast of characters. Fitting inside this particular box are 48 thick cardboard tiles that help create a modular board, 128 cards, custom meeples for the 9 characters, 24 wood sticks to create walls within the bank, and a fistful of small tokens. The Burgle Bros box is my favorite box in my entire collection, and really stands out on my shelf as something unique. Art and box style is something I usually do not call out unless I am blown away, and Brugle Bros blows me away.

One to four players play burglars, each with their own special powers, trying to steal the loot from three different safes on three different floors. Each floor is a 4×4 grid of face down tiles and wooden sticks to represent walls.

To accomplish this mission each player has 4 actions. You can peek into the room next to your character and revealing what that room has in store. If you are brazen enough you can charge into the room without prior knowledge. With a majority of the rooms being alarms, which are set off in their own unique way, charging in is risky. Now players don’t need to use all their four actions but if a player only uses 2 actions an event triggers.

Events are risky, half of them good, and half of them are bad. Anything from making the guard move again, giving you a tool, drawing a new guard destination or stopping the guard. I really enjoy the events because it intrigues the gambler in me. The chance that I could get one event that would save the game or at least the round makes me smile on the inside.

A guard is stationed on every floor and has a specific destination. When a player’s turn ends, the guard on the player’s floor will move towards it’s destination. If a guard enters a player’s room, a sneak token from that player must be given up. Each player has three sneak tokens to begin the game, and if they would ever have give up a fourth then everyone loses. 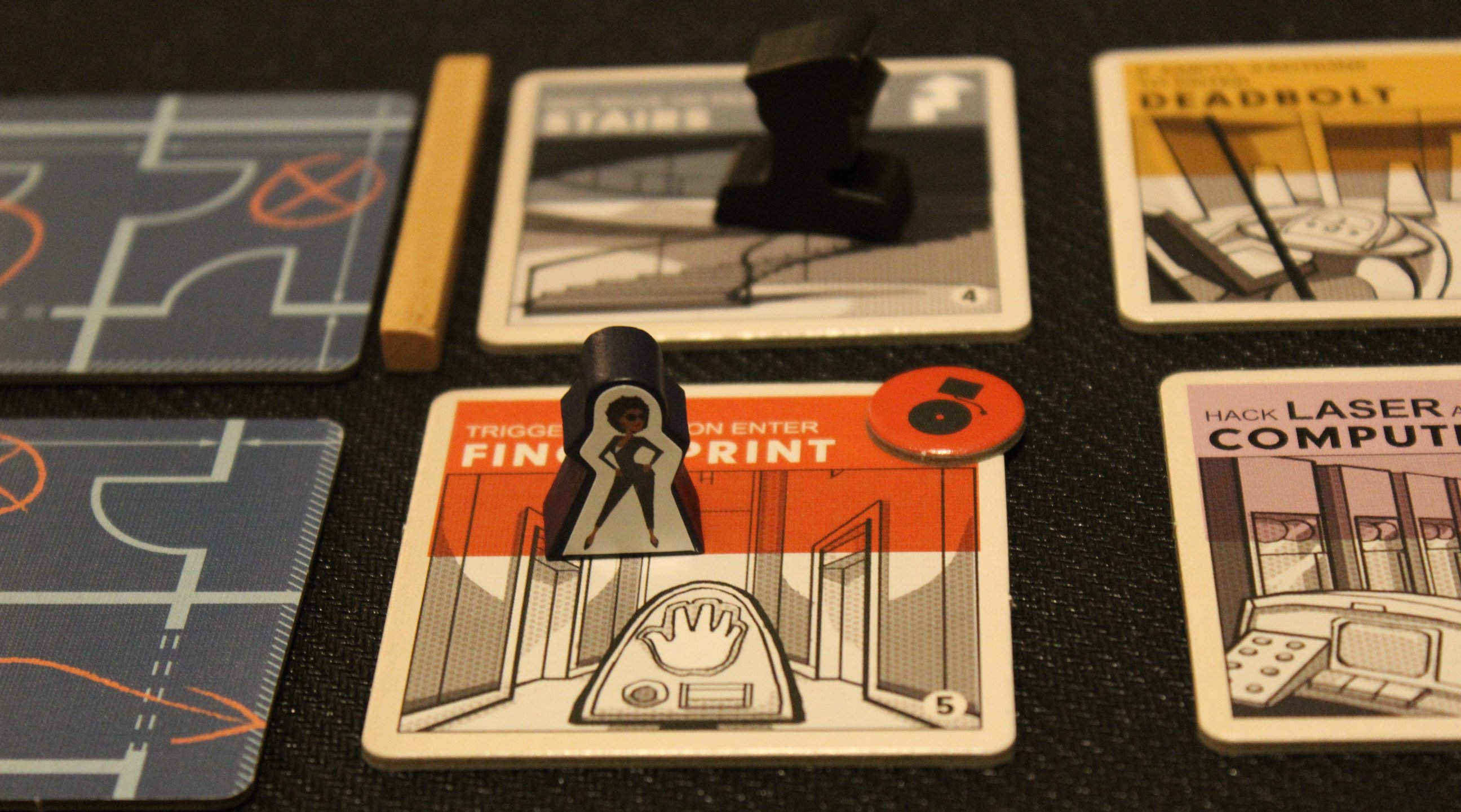 Guards will move to alarms. Looks like The Raven will be losing a stealth token.

While dodging this guard, players are looking for the safe. But don’t think that once the safe is found that the trouble is over. In order to open the safe and remove the precious loot players need to uncover all the tiles in the row and column. Any player on the safe can then spend two of their precious actions to add one die to the safe. That lets any player use one action to roll, any faceup tile showing that number gets a “crack” token. Cover up all the crack tokens in the safe column and row then you receive a Tool and Loot card. Then the fun really starts.

Tools are always helpful and will give players additional options on their turn. Loot however is always bad for the player. Loot makes moving through the shadows significantly harder. Players may have to smuggle out a tiara that sparkles and allows guards to see characters from one space away. Perhaps a barking chihuahua that draws guards to you is in the safe? These items are cruel and make your strategy change on the very first first floor. The fact that the team will have three of these items by the end of the game is frightening and exhilarating.

Cracking a safe does sounds like a bear of a task, but it is actually easy and does something really wise mechanically. Burgle Bros puts the luck on the player. Yes, there is a lot of randomness built into the game already with the setup and the guards destinations but doing this makes it stand apart from the other cooperative games out there. Allowing players to have ownership of their luck makes the satisfaction of cracking the safe all the better. Do players spend more time adding dice to hedge their bets or do you wait for the player with the hot hands to roll? My main complaint about other cooperative games is that I feel like I am standing in a hurricane not able to do anything about my luck. I have not felt this way with Burgle Bros in any of my playthroughs.

Characters in Burgle Bros offer a fantastic variety of powers. Each character has a basic and advanced power, and players can use a character in a completely unique way with each play. Players also take ownership of their character because each one has a custom piece for the character. Here is an example from my last playthrough of Burgle Bros. My character, The Rook, had been stuck on the first floor for the whole game. I was keeping the guard distracted and taking the heat off my fellow players. Towards the end of the game I decided to break that strategy because I wanted to open the safe. The Rook has been portrayed as the leader on the promotional material of game so I felt like I needed to get in there and be the leader!

9 characters makes for a high amount of replayability!

Included in the rules and components are mini expansions but I have not played those variants yet. I am still having too much fun with the base game to try them out. The variety in Burgle Bros keeps me coming back over and over again. I feel like I am in Ocean’s 11 narrowly dodging the guards and hoping my teammates do exactly what is needed of them. If you are in the market for a cooperative game this is a must buy. However if you already own Pandemic, burn it in a dumpster fire then go out and buy Pandemic Legacy and Burgle Bros. You will be much happier in the long run.

If you would like to acquire Burgle Bros. for yourself, go to fowers.net and buy from the designer directly.