There was never going to be a question of whether City of Miracles, the final installment* of the Divine Cities trilogy by Robert Jackson Bennett, was good. Of course it was going to be good. The question was how good. Good enough to close one of my favorite fantasy series ever? Good enough to be a successor–or a capstone? 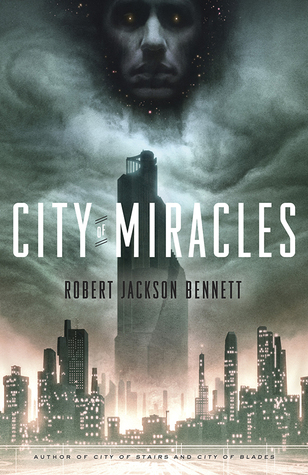 Ultimately a bit of both, I think. What has impressed me most is Bennett’s ability to get at (and answer) the most essential questions without reducing the complexity of his world or characters. This is still very much a book about the nuances and struggles of colonialism, religious persecution, and governmental overreach, and those issues aren’t shunted to the side. Instead, they’re put into a larger context of what it means to rule and be ruled–whether you’re a citizen, a god, or a refugee.

Sigrud, the brokenhearted Viking badass, is a bit of all three. He has not aged and has not found absolution for the carnage he wreaked in City of Blades (as with the previous novels, we’ve continued in time but not with the same character–-and now it’s Sigrud’s turn). He’s biding what might be an unlimited amount of time in the outskirts of society, brooding on his sins, when word comes: Shara, his beloved friend, has been assassinated. Who would bother to kill the former prime minister of Saypur, a woman who now devotes her faded career to charity? And who could kill her, one of the canniest minds of her generation? Sigrud intends to find out. He does so at first out of a sense of resigned fury, since vengeance feels like all he’s good for. But over the course of the book, his most fundamental beliefs about himself and the world will change.

Also he’s going to kill a lot of people. I just want to reassure you of that. I’m going to rhapsodize about this book’s many insights, but it is full of action and drama and battle like the others and you will not be bored. Because of the insights, but yes, also because of the murder.

Right-o. So, the first book was a long and thrilling discussion–complete, as most “discussions” are on the world stage, with bombs and assassinations–of what it means when your gods fail you. In this world, that means literal gods and also the gods we set up for ourselves, however false they might be: of just government, true love, and heroes. And even more thrilling and rare: we get a sense for what happens when our gods, however flawed they might be, succeed.

The second book took stock of all those dead gods and asked, “well, what do we lose when we lose the gods?” The answer is a great one, because it takes such a simple question so seriously. We don’t actually lose our religion, at least not all at once. Form calcifies over function, and people go on with the motions out of hope or despair. Instead, we lose the ultimate hope for justice: we lose our afterlife, the place where the scales balance. We lose that most fundamental pact with the gods that says that what we do matters, even minimally, to the infinite.

I had my guesses about the ultimate question of the third book, and I was both right and wrong. I supposed we might finally get an answer to the question of beginnings, rather than endings: where do the gods come from? We sort of get an answer (I won’t spoil it). But really, the third book is about power. Power, Bennett supposes, is a zero-sum game. If one person has more, then everyone else has less. That goes for the gods, too.

It’s popular nowadays to turn the ancient order on its head: instead of human needing gods, gods need humans. Gods need humans’ worship and belief to exist at all. I find this idea theologically uninteresting, to be frank. It sounds more like the rambling of a pothead: “what if…like…instead of god making us…we were the ones…who made god?? Whoaaaa.” 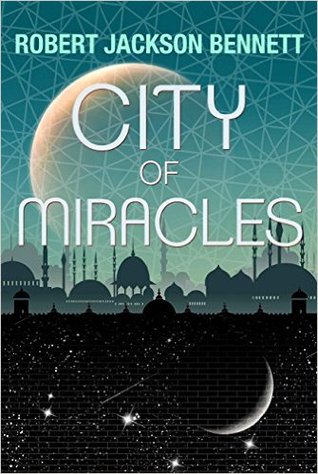 Some people have used this idea to good effect. When Terry Pratchett did it in Small Gods, it was pretty original. Not so nowadays, when I see this idea crop up without examination or understanding. Great, so humans “made” gods. Then what? Nobody seemed capable of answering that.

Nobody except Bennett, that is. His standpoint isn’t quite as simple as “mortals make gods,” but he does do a fantastic job exploring the theme. Or maybe “exploding” the theme would be a better way to put it. In either case, he takes seriously the complexity of interaction between human and divine, not reducing it to who creates whom. Because parents create children, but those children aren’t ultimately defined by their parents. Parenthood is on display here in all its complexity, both triumphant and limited. So too is metaphor, the way that how we think delineates what we think. If we collectively create the gods, then they express our limits as well as our possibilities, whether we understand them or not. And when they interact with us and reflect things back on us, well, that’s when things get really interesting.

Interesting–and more. When I turned the last page, I wasn’t just intellectually engaged. I was thoroughly, tearfully moved. There’s something very special about this book that makes deep emotion an act of reflection, and vice versa. Sigrud’s bravery toward the end is profound, even transcendent: in a story about gods, his superhuman endurance and deeply human struggle for redemption combine into something truly amazing.

City of Miracles comes out May 2. Preorder here.

If you, like me, need to salve your spirit when you realize there might not be any more books in this series, I have a few suggestions to fill out your order. If you’re going to miss Sigrud more than anyone, read Egil’s Saga, a viking epic featuring a man who will kill you and write a poem about it, and then maybe turn into a werewolf. If you’re going to miss the clandestine spy stuff, try Steven Brust’s Vlad Taltos series, which is as sneaky and clever as it gets. For fans of Shara and her idealism and politics, the heart wrenching Lumatere Chronicles is for you. Those interested in the divine aspects of all this should check on N. K. Jemsin’s Inheritance trilogy. And for devotees of singular soldier Mulaghesh, the closest I can think of is the Deed of Paksenarrion. But really, this world and its characters are all one-of-a-kind, and no matter how happy I am with how these books turned out, I am dreadfully sorry to see them go.

*unless I am wrong, and never would I be more pleased to be wrong