The Clean Room #1 is a tantalizing first step into a world that is altogether a little too familiar.  Everything is overexposed–in graphic detail–but somehow still full of hidden agendas. Each character’s story immediately dramatically unfair, and madness is in ample supply. It’s a comic very much for and about this suspicious generation, weaned on corporate marketing strategies and NSA leaks, forever seeking some kind of authenticity.

Gail Simone hits the nail on the head when she introduces a spooky cult “in that weird twilight industry between self-help and religion” into the mix. People these days are suspicious of religious organizations, but they recognize the potential that religion has to inspire. Thus the “self-help” mantra, the idea that you can bootstrap yourself into enlightenment. It’s so banal, and yet this series promises to remind us that there are things we may not want to become enlightened to.

Adding another layer of dissonance are the things that are decidedly un-familiar: here there be monsters. Two nameless monstrosities impose themselves on the narrative without explanation, leaving us to conclude, tentatively, that there is some connection with the mysterious Clean Room. Whether these creatures are delusions, projections, or just some kind of unseen realities is unclear; all I know is that the pink one is creeeepy. The other, however, appearing right at the beginning, lacks sufficient context to be unsettling. 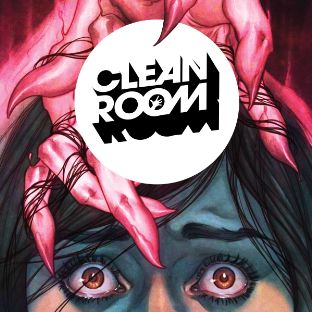 This is something I see the entire comic pulling hard against. We’re so inured to gore, violence, and sexualized imagery that it’s hard to really shock or enthrall. So while The Clean Room has a few images that I’m sadly a bit numb to, Jon David-Hunt generally does a good job of showing us just barely enough to bring the most impact to the story. Restraints and stuffed animals, and above all the tinges of pink are things that I just know are going to turn into the stuff of nightmares.

It’s that conviction of dread even before the horror properly starts that really indicates this comic’s potential. Simone’s writing is as sharp and savvy as ever, and Vertigo’s general track record has quite a shine to it. I’m also pleased to see that it’s getting widespread readership, despite coming out almost exactly the same time as the Star Wars trailer (when millions of geeks suddenly cried out in squee and still haven’t gone quiet). I’m looking forward immensely to the next installments.

In the meantime, I may revisit Underground by Haruki Murakami, a collection of interviews from both the victims and perpetrators of the 1995 Tokyo subway attack, or Going Clear, Lawrence Wright’s expose of Scientology. Or if the sad reality of it gets to you, there’s always 1Q84, also by Haruki Murakami, about a weird cult and true love and also there is a goat.