Marie Brennan is a true chameleon. I would never have guessed that this tough, relentless story was written by the same woman who gave us the intensely High Victorian Natural History of Dragons (plus sequels), but here it is, fast and furious.

An unidentified protagonist—let’s not be too creative and call her Nameless Warrior—is brought into being by a spell. That’s all we know, and that’s all the Nameless Warrior knows. Spell=existence. But why? And who are all these people chanting around her? What do they know, and what do they want?

Oh. They want her to go get something that’s nearly impossible to get, or die trying. Well screw you very much, creepy chanting magicians! Our Nameless Warrior may be magically compelled to obey, but that doesn’t mean she can’t walk directly through your bodies to get where she’s being compelled to go. Just because she doesn’t know who she is doesn’t mean she doesn’t know how to knock a few heads. Capiche? 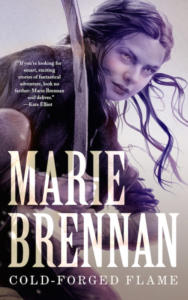 Our Nameless Warrior functions by instinct but is driven by ignorance. It’s her total amnesia, ironically, that makes her so interesting. But not because she’s ignorant. Far from it. She possesses a number of extremely strong convictions that she expresses swiftly and violently. For one, she doesn’t like being anyone’s pawn. For two, she doesn’t trust anyone, especially not the jerks who summoned her. For three, she hates not knowing, and she blames everyone and everything in proximity. There’s the implication that it’s purposeful, or at the very least no one tried to remedy it. One of the Cruais’ people even warns her against learning too much, but this mostly pisses her off. It’s both satisfying and a great deal of fun to see a character let loose like this, one whose attachments don’t get in the way of her being stabby.

Not until writing this review did I realize that I’m usually annoyed by amnesiacs. They’re a lazy writer’s crutch and a mediocre writer’s stumbling block; they cast the vague illusion of mystery but rarely deliver. It’s easy to identify with a protagonist who, like you (the reader), has no idea what’s going on, but very, very hard to make the reader identify with the person once their memories have returned, since the circumstances that led to amnesia are often so contrived or far-fetched. (As a side note: if I see one more anime in which the main character is an amnesiac I will probably…well, okay, I probably won’t break or set fire to anything, but I probably also won’t watch it.)

What I appreciate so much here is that the cure isn’t a bop on the head or a dose of romance or some magic McGuffin. It’s actually the same process we non-amnesiacs use to find out who we are: trial and error, and the gradual revelations of time. It’s rather a nice extended metaphor running underneath the narrative. You earn your memories by doing things–that’s as true for those of us without magical memory loss as it is for those with it.

Oh, and one more method, without which this story would be a little claustrophobic: the necessity of putting yourself in the context of others. Aadet, a good-humored fellow, also turns out to be wandering the mysterious island, and he more or less bothers her into traveling with him. Their conversations add a new dimension to the story, one that doesn’t dim the Nameless Warrior’s intense voice, but does add a bit of complexity to her internal struggle as she tries to understand exactly what she’s lost along with her memories. Her humanity? Her ability to relate to others? Her ability to be anything more than a tool? All good questions, and all ones she tries to keep behind a stoic (and rather acid) facade.

The end sequence is an even more intensely psychological examination of a very limited (but very high-stakes) set of choices that would feel very dull or confusing in a less competent writer’s hands. Fortunately, we have Brennan to guide us through both an unfolding mythology and an unfolding set of personal realizations, the capstone to this quest of self-discovery. She manages to set forth the stakes, the negotiation of those stakes, and the resolution all within an internal struggle that, externally, seems only to be a short walk back and forth to the Lhian’s cauldron. It’s remarkable to me how a short story can manage to make all of this work on the basis of such brief narrative foundations. But the foundations are sound, and strong, and the Nameless Warrior’s struggle is very, very real.

The outcome–which is not cut and dried, and which I probably couldn’t spoil if I wanted to–is a tantalizing glimpse at what could be a much, much larger world (and maybe a bit more High Magical than I expected, but that may just be because I read her Natural History, which is, as it says, natural and scientific). I do hope Brennan does more with this world and the characters she’s placed so deftly within it.

Cold-Forged Flame will be released September 13.