The zombie- and magic-infused retelling of Romeo and Juliet that began with Bright Smoke, Cold Fire now finally has a conclusion in Endless Water, Starless Sky. It’s been hard to wait even the usual year for the sequel, since the blood-soaked cliffhanger was so heartbreaking. But Rosamund Hodge has not been idle. This is a complex, even profound meditation on the themes of love, duty, sacrifice, and atonement that she introduced in the first book.

We return to Romeo and Juliet, still separated, and now on opposite sides from book one. Romeo has offered his services to Juliet’s family out of guilt, and Juliet is bound against her will to defend the interests of Romeo’s family. It’s a clever way to maintain the tension without drawing out the same problems over and over, and I appreciated the nuance it added to the feud. There is some asymmetry of information, though: Romeo now knows that Juliet is alive, but Juliet still believes her husband is dead. 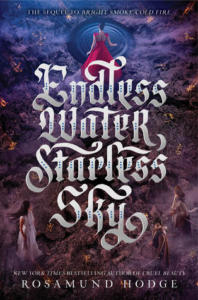 The main problem with the text is the same one that plagues the original Romeo and Juliet, which is the succession of misinformation and mistiming. Unfortunately, in our era of near-instantaneous communication, the missed connections seem more frustrating than tragic. Sure, I can understand them intellectually, but the combination of poor timing and naivety is not the stuff of drama it once was. Though no one in Endless Water, Starless Sky has a mysterious almost-but-not-really-dead potion (the Vibranium/Adamantium/Handwavium of its day), so that’s something.

Fortunately, most of the drama doesn’t turn on these mistakes. The city of Viyara is still under siege from the undead, who pursue the living ever more violently. Runajo, sick with guilt, still wants to make it all right by ending the Ruining, the supernatural plague that causes undeath and keeps the last living things trapped inside Viyara. Juliet wants to stop (or at least mitigate) the bloodshed between the clans. Romeo wants to put a stop to the Master Necromancer, whose machinations are becoming clearer. Their desperate, tangled paths will inevitably collide, but Hodge keeps us guessing as to whether it will all end with a wedding or a funeral. 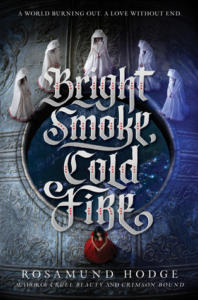 Well—both and neither, actually. It’s jarring to have a Shakespearean retelling that doesn’t end with a wedding or a funeral. Not bad necessarily, but it definitely threw me. The first two-thirds of the book have a few instances of uneven timing, with reveals and deaths coming either too slowly or in rapid succession. I have a feeling that Hodge’s heart was in the last portion of the text, since the journey through death is the most resonant and emotional part of the whole book. Romeo and Juliet venturing into death to stop the Ruining was inevitable ever since the first book, when Runajo discovered the historical record that spoke of bargaining with Death. That it took so long to arrive is maybe the reason the other sections feel a bit disjointed: all the disparate ducks had to get in their rows before the climax could commence.

And what a third act. Hodge poured all of her art into the journey through the lands of death, which are full of high symbolism and great imagination. Crow-beaked Reapers shepherd the dead through penance, forgetfulness, sorrow, and delight, all along a journey that reveals insight after insight like a flower unfurling. What the characters find is not what they—or we—expect. It’s so much more than that. With some truly deft passages, Hodge makes a fitting tribute to the original material and a fitting conclusion to her own richly innovative tale.

Above all else, Hodge is an expert in meaning, and with each book she pushes herself further to explore some of the deepest and most challenging themes: things like forgiveness, obedience, and yes, love. I look forward to revisiting this book repeatedly, and to reading whatever else she publishes in the years to come.