In a slightly surprising turn of events, Game of Thrones took Outstanding Drama but didn’t sweep all the Emmy categories as predicted. I’m glad the lackluster final season didn’t get rewarded for being famous, but I am sad for the actors who did the best with what they were given–and for the show itself, which I miss in spite of myself. My nostalgia for its better days was somewhat sated, though, by finally getting around to a book on my TBR that really deserves some more attention.

Silent Hall begins like a really good D&D campaign. There’s some setup and then the introductions. The heroes are immediately identifiable and categorically distinct: there’s the dragonborn sorcerer, the strong-and-silent fighter, the cowardly rogue, the smelly druid, and the beautiful bard. We have just enough time to get to like them, and then we get the catalyzing incident.

Their country is destroyed.

Fate stuck them together, but it’s suspicion and uncertainty that keeps them together. No one else wants to deal with the “cursed” islanders, and they themselves have few clear goals now that they can’t return home. Shellshocked and miserable, they begin a tentative journey together, but soon become embroiled in events that touch not only their lost island, but the whole of multiple worlds. At its heart is the titular Silent Hall, a place invisible to the gods. Whether it’s a haven or a trap depends on what further quests they choose to pursue. 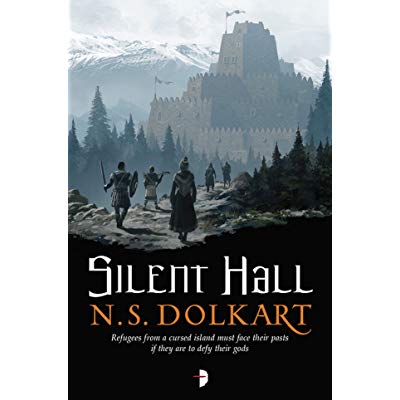 Dolkart very contentiously makes space for all of his characters to develop, and wisely makes sure that their individual, inward journeys don’t always complement the outward journey they’re on. The group continues to experience realistic amounts of friction and change, and no one who starts out as Neutral Evil turns Lawful Good. Instead, the character development is sometimes a matter of multiclassing: the bard begins to delve into wizardry, and the rogue has a crisis of faith and starts exploring the path of a cleric. As the druid slowly discovers her secret origins, she doesn’t multiclass but does discover connections to another race, the elves. And all the characters begin to question their relationships to the gods who may or may not have cursed them without ever telling them why.

The gods in this world aren’t just involved (again, à la D&D) but downright meddling. They’re like terrifying aunties at the world’s longest and most dangerous dinner, constantly telling you how to live your life—and really making your life miserable if you don’t go along with it.

I love this take on fantasy religion, since at its heart it means that Dolkart is really taking the idea of divine existence and magic seriously. He’s thought about what it would mean if humans really did have mutually dependent relationships with their gods. If the gods need humans to do their bidding and gain strength from their support, then the opposite must also be true: gods can be harmed and even destroyed by human opposition.

It’s an ideal popularized by Terry Pratchett’s Small Gods, which takes a more intimate look at the relationship between a single god and his single remaining follower. Dolkart pushes the idea to a broader, more societal meditation. How do cities and countries function if minor slights can invoke the wrath of the gods? How do people relate to one another if their gods are in competition? It’s a frightening reality, hence the series title, Godserfs. Capricious gods and fearful mortals don’t make a theology, they make an economy. An exploitative one. Silent Hall is mostly about the characters realizing the system is unbalanced, and I suspect the second and third books in the trilogy will be about correcting that imbalance.

The plot can feel meandering at times, since the major question—why were they saved but their home destroyed?—is not something our heroes feel powerful enough to take on right away. They need to complete side quests and level up a bit, and those side quests vary a lot in their goals and execution. Sometimes they’re running errands for the mage who offered them sanctuary; sometimes they’re trying to uncover the long-lost history of the dragons; sometimes they’re trying to thwart child-kidnappers. All of the side quests are reasonably well motivated, but they lack a centralizing impetus. Though the band does eventually find an urgent focus for all their talents and energies, it comes rather late and does more to set up later books than it does to wholly conclude this first one.

Nevertheless, if you’re looking for something to relieve the stress from Game of Thrones, this book is not about devious politics and realistic deaths. It’s about slightly special people who work very hard despite painful setbacks to learn, grow, and improve the world. It’s also a great deal of fun, and will definitely inspire something for your next D&D campaign.