Hello beautiful people! Today is  a wonderful, sunny day in the normally terrible (weather wise) Boston. What better excuse to enjoy the long awaited sunshine then to celebrate Free Comic Book Day at Comicopia. Now, Jennifer and I are not traditional comic book readers. I will pick up a trade from time to time if I hear enough buzz and Jennifer is a weeaboo who loves manga. So we got to stretch out of our normal comfort zone so that we could take advantage of this national pastime. 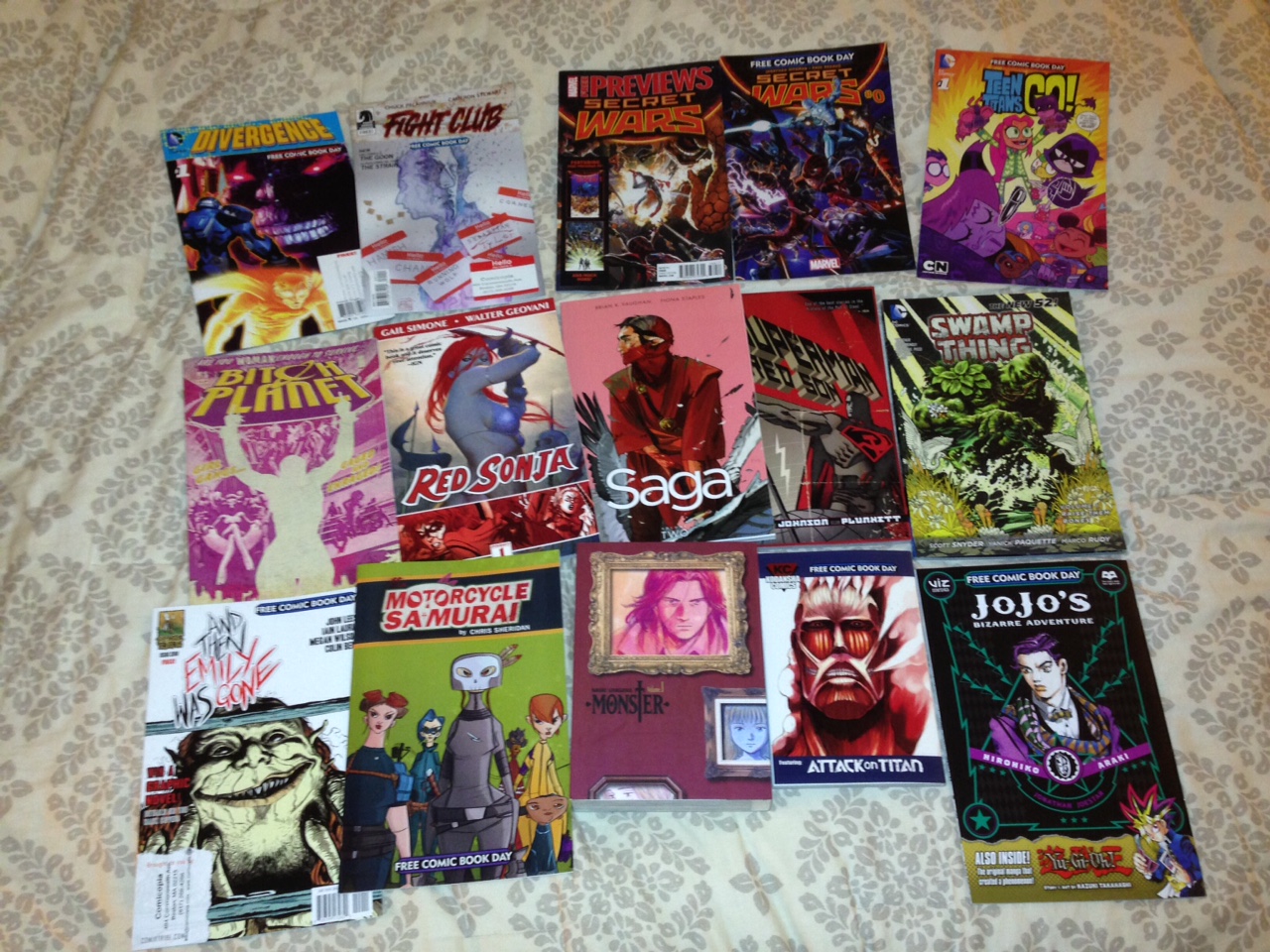 This is everything that we got! Some were free and some were not so free. Let us take you down our decision making trail. First, on why we choose to pick up the free promo comics, then on to the more costly choices. 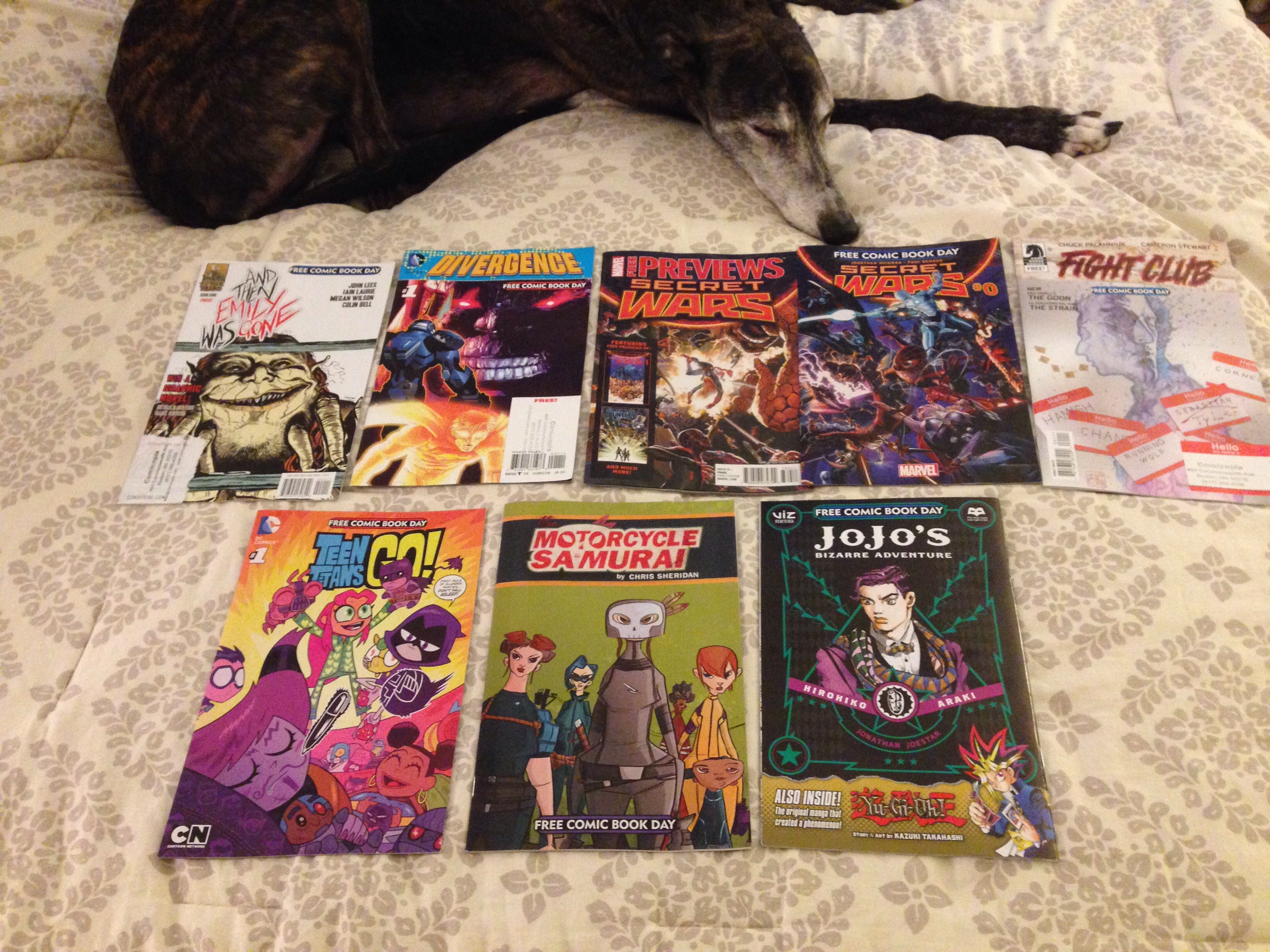 Tim: I had a pretty good idea of what I wanted going in but had no idea what any of the free comics were. There were lots to choose from and I went ahead and grabbed And Then Emily was Gone because it was spooky looking, Divergence because I am an idiot and thought Apocalypse was on the front (It is a DC Comic…so I don’t think that is him. Also I am pretty sure that is Superman on there too. Also, there were lots of people and I was stressed out. Sorry), Fight Club since I had heard this is the actual sequel to the hit film, which is strange, and two versions of Marvel’s Secret War. I don’t know the difference between the two versions but I am excited to find out.

Jennifer: I was pleasantly surprised to find that there were a couple of manga offerings among the free comics! I picked up JoJo’s Bizarre Adventure because I feel like my twitter/tumblr timeline is constantly talking about it and I’ve been meaning to watch the anime anyway. I think this is actually a perfect example of why Free Comic Book Day is so great. I probably would not have sought out JoJo to buy, but I will happily take a free copy! And who knows, maybe I’ll get super into it and buy all the manga. I also picked up Attack on Titan 1, which I have read but didn’t own for some reason. I grabbed Teen Titans Go! because our very own Harry Huberty and Christina Ladd (of Magic: The Gathering analysis fame) told me the show was good, and I picked up Motorcycle Samurai because the art style reminded me of the Gorillaz and the title sounds cool.

The Not so Free Comics! 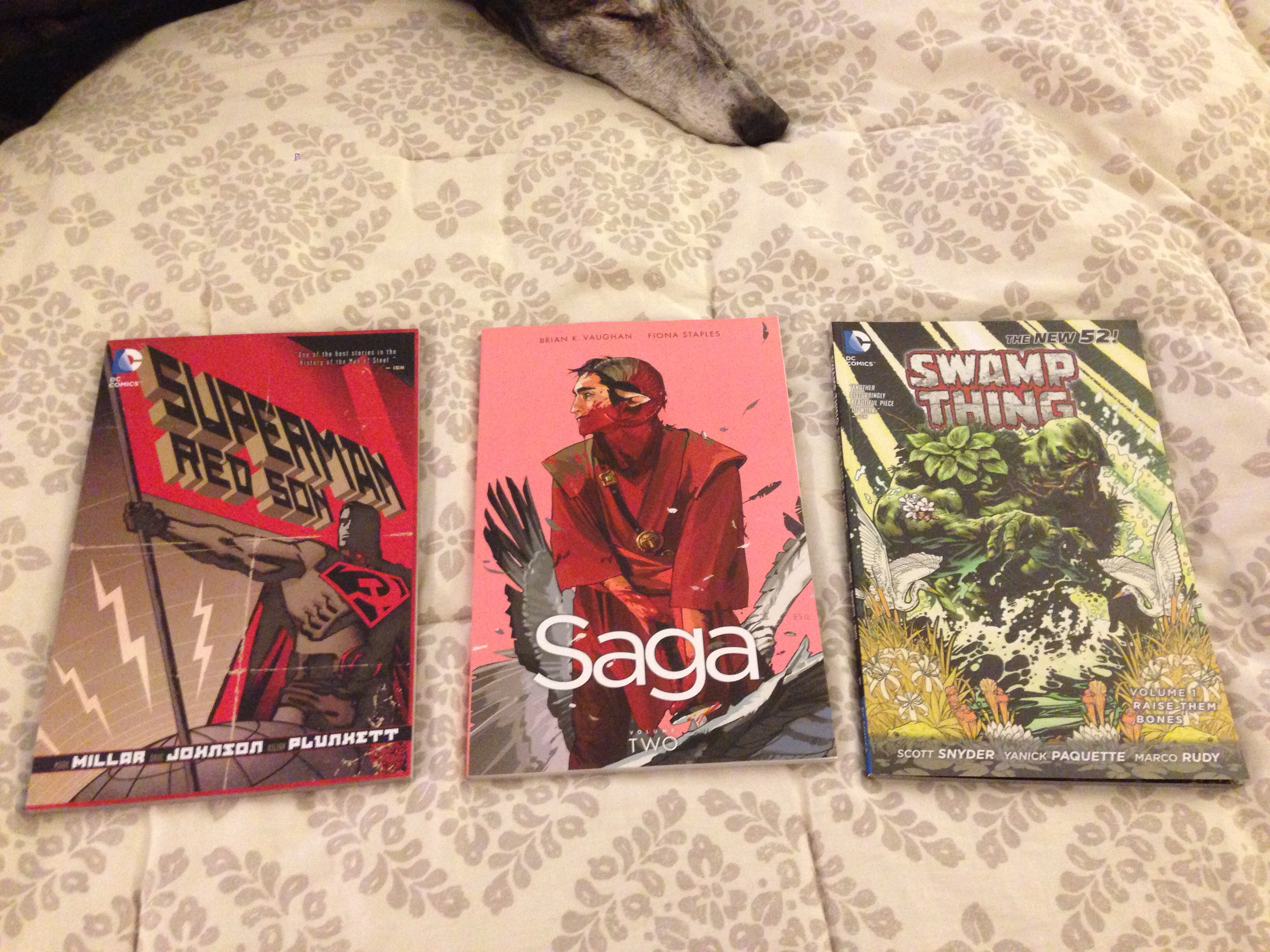 Tim: I chose to grab Superman Red Son, Saga, and Swamp Thing. I bought Superman since I have heard that it is an awesome alternative take on his origin story and I wanted to both read it and have it in my collection. There is something nice about collecting “the must haves” so that you can share them. Superman by himself doesn’t really do anything for me, but adding in Russia really revved my engines. Jennifer and I both read Saga (even though we are a bit behind) and Free Comic Book Day seemed like the best time to get the next thrilling installment. Plus it is a great, really weird, story. When DC’s New 52 was launched a few years or so ago someone mentioned that the new Swamp Thing was good. I double checked with my comic book loving friend over a beer today (we were on a patio soaking up the sun) and he said it was good. Plus, Swamp Thing as a character is interesting to me even though I do not know a lot about him. He is plant man. Or a muck man? Is he all swamp and no man? Edge of my seat questions!!! My friend also confirmed that Superman Red Son was good. Basically, I do what my comic book friends tell me. 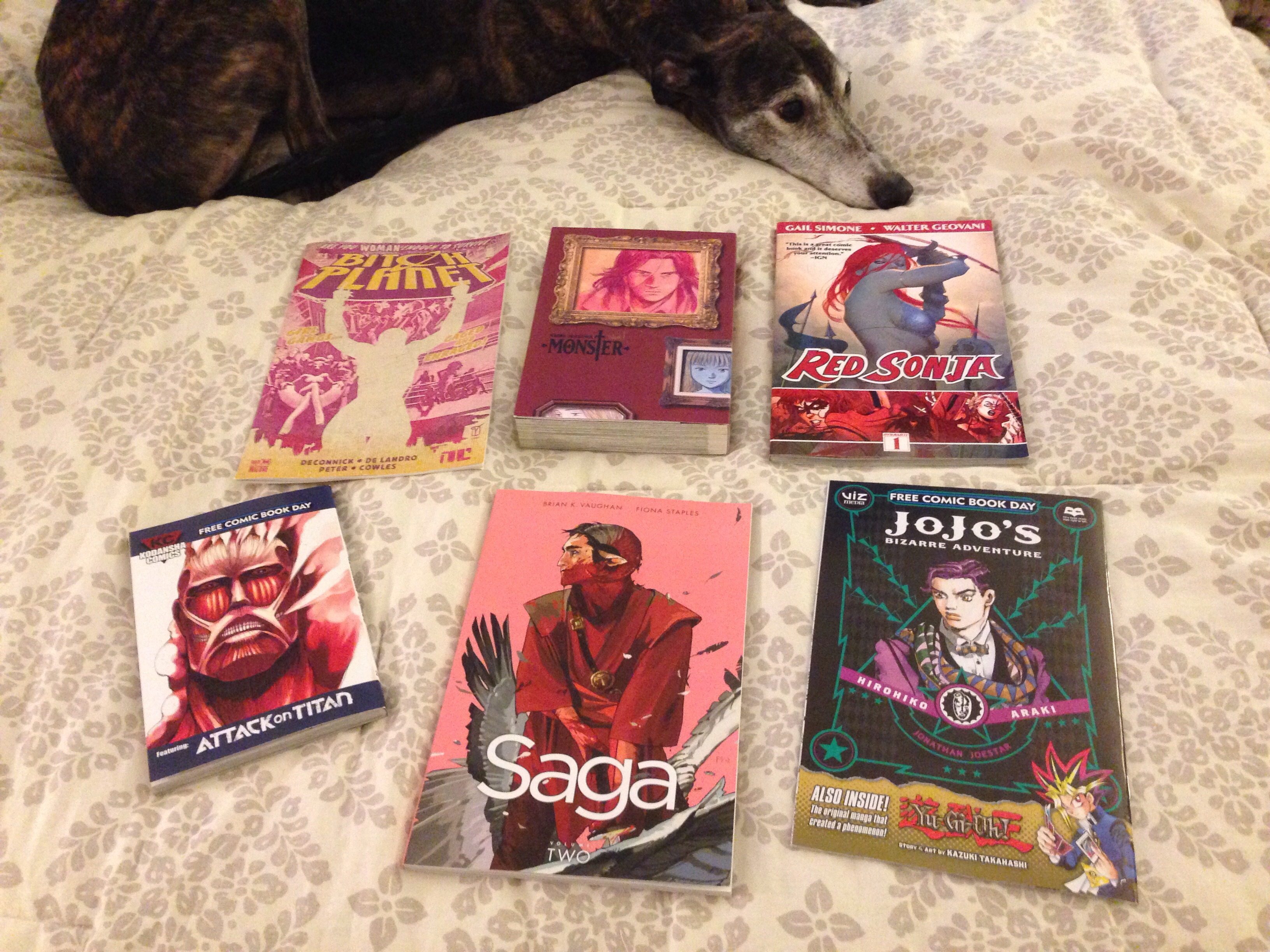 Jennifer: I bought the first volume of Monster, the first trade of Red Sonja, and the first issue of Bitch Planet. If you follow me on twitter, you will know that I am a huge fan of the Tokyo Ghoul manga, because I love being sad. Multiple people have suggested Monster as a prime example of Sad Manga, so I am extremely excited to get my cry on!!! I decided to go for Red Sonja purely because Gail Simone is a delight on twitter. I want to support her sass towards internet fools and also the many pictures she posts of her two greyhounds. I’m also very interested to see what a woman-written chainmail bikini comic will be like. Bitch Planet is another purchase fueled by twitter. All the cool people whose opinions I respect are reading Bitch Planet and I want to get in on the action. I started reading it on the train on the way home from the comic book store and was immediately rewarded with a nude prison brawl, so I would say that it seems like a pretty solid choice so far.

What about you? Tell us in the comments below about your own Free Comic Book Day spoils and give a shout out to your local comic book store too! Or, share what you are currently reading that everyone else should pick up.