This recap obviously contains spoilers from season 5 episode 1, so don’t read it unless you are weird and want to be spoiled before watching it.

The Cast of Thrones podcast will be available for download on 4/14/2015 for this episode.

The first episode of the much awaited season 5 of Game of Thrones finally premiered and there was a LOT of exposition. Since it contained very little action, I’m sure a lot of fans were disappointed but I actually liked the episode. It set up so much for future episodes and that makes me happy. 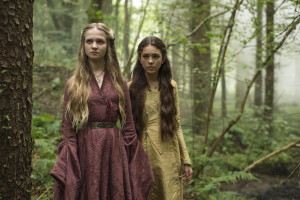 The episode opens with two young highborn girls walking through the woods. One of the girls (the brunette) is apprehensive about going any farther, saying the other girl’s father would not be happy about it. The other girl (the blonde) is like “girl come on…we doin’ this”. They come to a shack and venture inside, although the brunette still has misgivings about the whole thing. Inside, they find a woman, who we know to be Maggy the Frog from the books. She is also supposed to be old and gross looking but I guess the show done upgraded her. She is a fortune teller so the blonde girl demands that Maggy read her fortune. When Maggy resists, the blonde girl tells her that her hut is on her father’s lands…her lands…and Maggy will do as told. That’s when we get the first hint that this bratty girl is young Cersei – threatening people since way back. Maggy gives in, although she does warn Cersei that she probs doesn’t really want to know what her future holds. She tells Cersei that she needs some of her blood and hands her a knife, which Cersei uses to cut her finger. Maggy tastes her blood (gross) and tells Cersei that she will not marry Rhaegar and be a Princess but she will be a Queen for a time, till a younger more beautiful queen takes over. She also tells Cersei that her King will have 20 kids and she will have 3…3 crowned in gold and shrouded in gold. 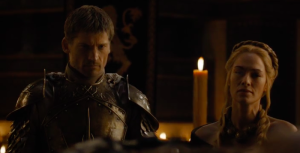 Then we cut to present day Cersei traveling by palanquin to her father’s funeral at the Great Sept of Baelor. On her way up the stairs, she stares daggers at Margaery, whom she suspects to be the prophesied “younger and more beautiful queen”. Jaime is standing guard inside the Sept where Tywin lies in state. Jaime is furiously telling Cersei about how everyone is conspiring against them and how they need to stick together, now more than ever before. Cersei straight up asks him if he was the one who freed Tyrion and Jaime does not answer. Cersei tells Jaime that at least Tyrion killed their father on purpose but Jaime killed him on accident. Girlfriend needs to focus on what is important at hand instead of being angry at Tyrion. As Ron Weasley would say, “she needs to sort out her priorities”. But, on the flip side, no rapey sex beside a dead person at the Great Sept…so, yay?

At Tywin’s wake, Loras is paying his condolences and Cersei looks so fucking bored. She’s like “plz go away”. She sees Tommen and Margaery flirting and gets annoyed. Too many emotions, so she just resorts to drinking more. She runs into her cousin Lancel…you know the long blonde haired youth whom she bedded and who was Robert’s squire and her cousin? Yeah that one. Turns out, he has cut off his glorious blonde hair and is now one of the Sparrows (a religious fanatic). He later asks for her forgiveness for leading her to their unnatural relationship and for the whole letting-Robert-drink-too-much-wine-which-ended-in-him-getting-gored-by-a-boar thing. He tells her that he has found peace in the light of the Seven and Cersei is just like “brah, please go away”. 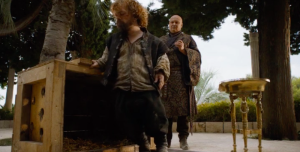 Next, we go to Pentos, where Varys is finally letting Tyrion out of the crate he has been confined to for the entirety of their trip. He has had to shove his poop out of the hole in the crate (gross). Varys tells him that he didn’t get a lot of joy out of picking up the poop and throwing it away (double gross). After getting used to using his legs again, Tyrion heads straight for the wine and pours himself a good sized drink. Varys tells Tyrion that they are at Illyrio’s house, and that they’ve been working to restore the Targaryen rule and save the Seven Kingdoms from itself. All the while, Tyrion is drinking more, throws up all over the nice rug, and continues to drink. Tyrion is super depressed and does not GAF anymore. 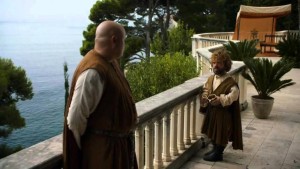 Later, we see Varys and Tyrion meet up again. This time, Tyrion looks like he’s cleaned up a little but he’s still drinking. Varys tells Tyrion that he is like his father and has an instinct for politics but also possesses compassion.  When Tyrion asks Varys what he wants, he says that he wants “peace and prosperity, a land where the powerful do not prey on the powerless”. Tyrion scoffs at this and tells him that that’s how the powerful became powerful…by preying on the powerless. Varys says maybe that’s because people have just gotten used to it and asks Tyrion what he would do if he was on the throne. Tyrion says he will never sit on the throne and, when Varys describes the person they need to take the thrones, wishes him luck on “finding him”, to which Varys says “who said anything about him?” Varys gives Tyrion two choices: stay at Illyrio’s and drink himself to death or ride to Meereen with him and meet Danaerys. 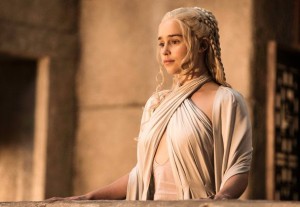 We go to Meereen, where the harpy statue has been successfully pulled down. One of the unsullied from the pulling-statue-down-party goes to the brothels and pays a woman for cuddles and a song. HE JUST WANTS TO BE HELD. But then he gets murdered by the Sons of the Harpy. Dang Sons of the Harpy just be killing people. Dany wants the murdered unsullied to be buried with honors. Her advisers tell her that it will only make the Sons lash out and she coolly says that them lashing out will make it easier to kill them. Ooooo girl. Also, Missandie asks Greyworm why the unsullied would go to the brothel and he says IDK and rushes out. Something tells me he does know and maybe he goes too.

Later, Daario Naharis is back from his trip to Yunkai with Hizdahr zo Loraq and they’re like “yeah we totally did ittttt”. Hizdahr asks Dany to reopen the fighting pits because its easy to rule happy subjects rather than angry ones and the people of Yunkai realllllly want their fighting pits back. They try to assure her that it will only be free men fighting free men but she is not swayed.  She stays at a firm NO THANKS. Daario tries to change her mind after some sexy times (Daario’s butt doe) by telling her his life story – how he learned to stay alive in the pits and how it eventually led him to her. Sweet. He also tells her that she needs to be strong and that she’s the mother of dragons, not the mother of the unsullied. We learn that they still don’t know where Drogon is and that she can’t control her dragons anymore. She tries to go visit them but they’re really unruly, so she runs out of the catacombs looking scared and frustrated. Control your chillun, Dany!

We see Jon training Olly at Castle Black. Almost seems like he’s going a little hard on Olly…is it because he killed Jon’s lady love? But he is also being nice to Olly and giving him advice, so maybe not? Alliser Throne is limping around and this scares Gilly because she knows he doesn’t like her, so she asks Sam to not let Alliser send her away. Melisandre comes to fetch Jon because Stannis wants to speak with him. On their way up to Stannis, Jon asks her if she’s cold and she says nope. She makes him feel her skin and then asks him if he’s a virgin. When he says no, she says good. CREEP ALERT. STRANGER DANGER. JON, YOU NEED AN ADULT. When they get to Stannis’, she announces him as the bastard of Winterfell. Rude. Stannis tells Jon that he wants the wildlings to fight for him and to get Mance to agree to this or he will burn by the night’s end. Holy deadline, Batman. 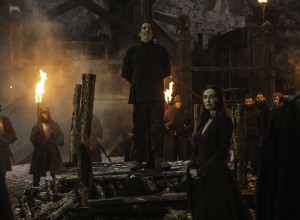 Jon goes to talk to Mance and tells him to bend the knee so he can save his people. Mance tells him that his people followed him because he was strong and if he bends the knee, he will no longer be strong. He admits that he is afraid but he would rather burn than kneel. He tells Jon “if you can’t understand why I won’t enlist my people in a foreigner’s war, there’s no point in explaining.” When Jon tells him that he’s making a mistake, he comes back with “the freedom to make my own mistakes is all I ever wanted.” At night time, they lead Mance out on to the courtyard, where a pyre has been built. Stannis tells him to kneel but Mance refuses and wishes him good fortune in the wars to come. They put him up on the pyre and Melisandre makes a speech: we choose light or death, we choose good or evil, we choose the true god or the false, and that Mance’s fate is the fate of all those who choose the darkness – and then she lights up the pyre which slowly burns. You can see the absolute terror on Mance’s face. Jon doesn’t seem able to stomach this and leaves. As Mance starts screaming in agony, an arrow (shot by Jon) pierces him and grants him a quick death. 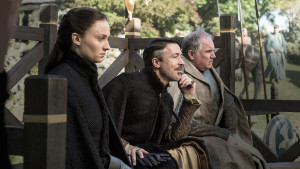 How about Robyn “training”? Sansa looks sooo bored watching the training session. And whose letter did Petyr receive that made him want to leave immediately? Also, as Pod and Brienne are bickering again and Brienne is being mean to Pod, Sansa and Petyr’s caravan strolls so close to them. SO CLOSE. When Sansa asks Petyr where they’re going, he tells her they’re going to a land so far that Cersei can’t even get her hands on her. Where is this land? Winterfell?

Loras also DAF anymore. Margaery (who is hangry) wants him to be more discreet but he’s like “pssh girl. who cares? everyone knows.” He doesn’t think he will have to marry Cersei anymore, which could be a problem for Margaery because it would mean Cersei will remain in Kings Landing. But Margaery seems to have something up her sleeve.

Next week: The House of Black and White