This recap obviously contains spoilers from season 5 episode 3, so don’t read it unless you are weird and want to be spoiled before watching it. 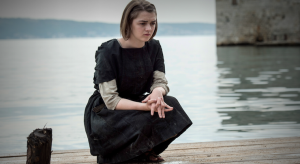 Arya is inside the House of Black and White and she be sweeping and cleaning shit up. She sees Jaqen “Jesus” H’ghar comforting a man and giving him something to drink from the fountain. She confronts Jaqen and tells him that she ain’t there to sweep the floor; she’s supposed to be his apprentice. He tells her that she only wants to serve herself and that she must be no one in order to serve the god. She says “omg there are like so many gods…which one is it” and he tells her she knows who the god is. The god of DEATH. That dude that Jaqen was helping has died and gets carried out. 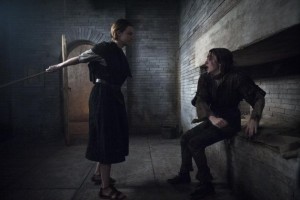 There’s another girl at the House of Black and White who Arya tries to speak to but the girl does not respond. Well, ol’ girl goes to Arya’s room and starts beating on her pretty much saying Arya doesn’t deserve to be there and asking her who she is. Jaqen walks in and tells the girl to GTFO. Once again Arya tells Jaqen that she is ready to be no one and serve but Jaqen asks her if she is no one, how come she is surrounded by Arya Stark’s stuff? So, sadly, Arya goes to the waters and sinks all her belongings. I was at the edge of my seat, screaming at the TV to not let her sink Needle too…Jon gave it to her! I was very thankful that she can’t seem to rid herself of Needle so she hides it in a convenient hole, under some rocks.

She’s back cleaning inside the House of Black and White, when she sees the door through which the dead bodies are taken. It looks like she’s contemplating whether she should make a run for it, when Jaqen walks up to her and motions her to follow him through the door. Down the stairs they go until they come to where the body is laid. She then helps the girl who beat her up to wash and clean the body. She tries to question the girl about what they’re doing but to no avail. 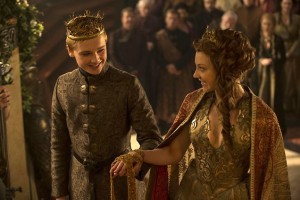 Tommen and Maergery are getting hitched. Party! They also have the sex, which was really creepy to me because the actor who plays Tommen is 17 years old (18 in September) and Natalie Dormer is 33. I’m sure the actor was enjoying his life because Natalie is HOT but still…creeped me out. Anyway, all Tommen wants to do is have sex but Maergery is like “lets take a break and talk about your mom.” She starts to talk about how protective Cersei is of Tommen, her baby boy, and how she will never let Tommen out of her sight. Planting those seeds against Cersei, are we? Well it seems to be working because when Tommen and Cersei are walking about and talking, Tommen is like “how about you go home to Casterly Rock?” 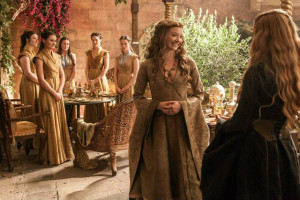 Cersei knows this is Maergery’s doing so she marches to her. How about that zinger from Maergery about it being too early for wine for them but getting Cersei some wine? Ha. Also, who doesn’t like to joke with their mother in law about how much sex they had the night before? Ha Ha, right? Cersei, VERY intensely, tells Maergery to let her know if she needs anything at all. Guys, all Cersei wants to do is help Maergery! Yeah okay, I’m not buying it either.

The sparrows catch the High Septon doing some kinky shit. They beat him and force him to walk through the streets, naked. Lancel is all kindsa crazy. When the High Septon goes to complain to the council, Cersei has a “IDGAF” face on. She goes to visit the High Sparrow, who is so very pious. She tells him that she has put the High Septon in the dungeons and wants the High Sparrow to take his place at the Great Sept. Upon her return to the Red Keep, she has Qyburn send a message to Little Finger, telling him to return to Kings Landing immediately. While Qyburn is writing, we see the Mountain stir in the background, to which Qyburn says “quiet, my friend” – what a creep.

Ramsay Bolton is just being Ramsay and flaying people who don’t pay taxes…because what other options are there? Is he supposed to NOT flay people? Don’t be ridiculous! Roose tells Ramsay to stop eating because he has some news. Since Tywin is dead, the Boltons need to make new alliances and the best way to do that is marriage. But who is Ramsay to marry? 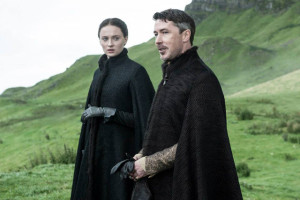 Well, he’s going to marry Sansa. UGH. When Petyr breaks this news to her, she is understandably distraught, saying she will not marry the dude who killed her family. Petyr is like “no no…you’re not marrying Roose. You’re marrying Ramsay”, like that’s any better. He also tells her that if she is against this marriage, they will turn back but it was time for her to stop being a bystander and tells her to avenge the family she loved. I hope Sansa gets so badass. 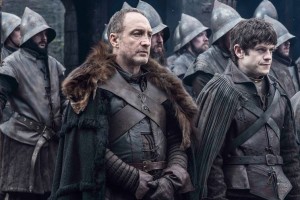 They make it to Winterfell and Sansa seems a little unsure at first but she puts her game face on and is super courteous to both Roose and Ramsay. How mad does Ramsay’s girl, Myranda, look though. She could be trouble for Sansa. An older lady takes Sansa to her chambers and welcomes her home, saying “The North Remembers”. I guess Sansa has some allies left in Winterfell. It was really sad seeing Theon avert his face from her. I want to see how Sansa will discover him and where that story goes, if anywhere.

Ramsay tells Petyr that he will not hurt Sansa (yeah right). Roose brings Petyr a letter from Cersei, which he has already opened and read because when you are as terrible as Roose, can you trust anyone? Roose tell Petyr that he’s suspicious of the fact that Petyr is in touch with Cersei and Petyr tells him “I just gotta do this bro” and to calm the f down. 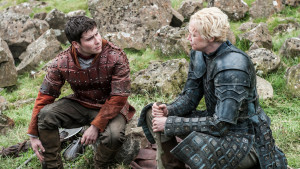 I really liked the scene with Brienne and Pod; they’re bonding. He tells her about how he came to be a squire; he was accused of stealing but Tywin spared his life because of his family name and sent him to Kings Landing to squire for Tyrion. He tells her that Tyrion was nice to him and she’s like “gosh sorry you have to now squire for a mean person.” Sweet Pod says he’s not sorry because she’s the best fighter he’s ever seen. That seems to make Brienne happier and she tells him that they will train twice a day so he can eventually be a real knight. Then she tells him about why she loved and served Renly; her father had put together a ball and all the dudes danced with her, but she found out that they were all doing it as a joke. When she was close to crying, Renly danced with her and told her not to let them see her cry because they were “nasty little shits and nasty little shits aren’t worth crying over.” Pod is like “buttttt wasn’t he uh…uh…” and Brienne says yes he liked men but she loved him because he was kind and saved her from being a joke. She also says that nothing is more hateful than failing to protect the one you love and that she will kill Stannis because “Stannis is a man not a shadow and a man can be killed”.

Jon is now Lord Commander and he has chosen Olly to be his squire. Keeping his enemy close. Watch your back, Olly. Jon turns down Stannis’ offer to make him Jon Stark, Lord of Winterfell, and asks him how long Stannis and his people will be staying at Castle Black because they’re running out of ration. Stannis tells him that they’ll be leaving for Winterfell within the fortnight. He also advises Jon to send Alliser to the East Watch. Stannis leaves but Davos stays to chat with Jon. He asks Olly to recite the Night’s Watch vow, specifically the “shield that guards the realms of men” line – and tells Jon that he would be helping the kingdom more as Lord of Winterfell than as Lord Commander. 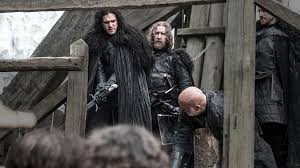 Jon is with his brothers, giving out orders to people. He puts a ginger in charge of latrine captain duty (for a second, I thought he was going to say Alliser). He makes Alliser First Ranger and tells Janos Slynt that he’s going to Greyguard. Janos flips the fuck out and tells Jon he ain’t going. Jon is like “ummm are you refusing my command? Okay, take him outside.” They put him on the chopping block and he starts to recant, saying he’s sorry, asking for mercy, and that he’s always been afraid. Jon seems like he’s about to let him go but then chop…cuts his head clean off. He passed the sentence, he swung the sword. 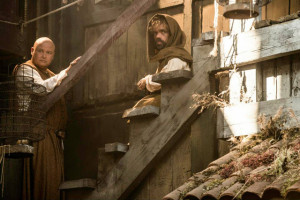 Tyrion really really really wants to go for a walk and he finally convinces Varys to leave their box. They walk through the streets of Volantis and take in the scenery. They come to an open space where a Lord of the Light priestess is speaking to a gathered crowd about R’hllor. She creepily stares at Tyrion and it rightfully makes him feel uneasy. Time for Tyrion to go to a brothel (Jorah is there), where they see a prostitute dressed as Dany and errrrrrbody wants her. He chats up another girl, who is pretty funny. She’s finally like “ok lets do this” but Tyrion can’t do it. He can’t sex her up because he’s still sad about Shae. So, instead he goes to pee and he is kidnapped by Jorah, who tells him that he’s taking Tyrion to the Queen. Which Queen is he taking him to?

Next time: Sons of the Harpy