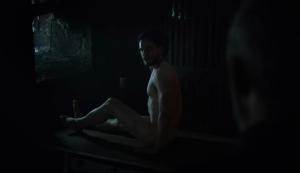 Jon is alive and Davos cannot believe his eyes. We got to see some Jon butt but what was up with that strategically placed leg hiding his Pennsylvania, being a literal cock block? 0/5 stars. Being dead for a couple of days apparently deteriorates your leg muscles because Jon tries to get up off of the slab he’s been laying on and he stumbles but Davos is there to catch him and cloak him. Jon remembers being stabbed but there was nothing after he died. Melisandre admits that Stannis was not the Prince the was promised by the Red God but maybe Jon is? Jon laments about trying to do what he thought was right but failing and Davos tells him to go fail again. With the help of Davos, Jon walks out into the open, where he is greeted by Tormund. The gathered men think Jon is a God but Tormund knows Jon is not because he has seen Jon’s dick and no God would have a dick that small. Classic dick goof. Jon hugs Edd, who comments that Jon’s eyes are still brown, instead of the blue of the Others – Jon jokes about waiting on burning his body, which leads to Ed asking if Jon is actually Jon since he’s making funny jokes now. Such goofs. 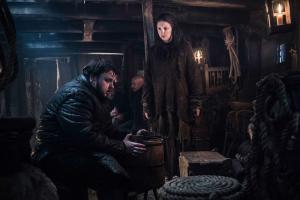 Sam, Gilly, and bebe Sam are sailing to Oldtown, or so Gilly thinks. Sam is not doing well on this voyage – he looks pretty green. Gilly is pretty excited about seeing Oldtown but the Citadel doesn’t allow women or children and Sam won’t have the same pull at the Citadel as he did at Castle Black. He shoots down the idea of Gilly staying outside of the Citadel; he’s taking them to Hornhill instead. His dad is a dick but his mom and sisters are pretty nice so they will take care of Gilly and bebe Sam. Gilly is put off by this idea but Sam tries to get her to understand and she relents, saying she and Sam trust in him. Sidenote: what an emotional rollercoaster Sam is in for – getting a raven saying Jon is dead and then getting another saying “never mind, he’s alive. JK.” 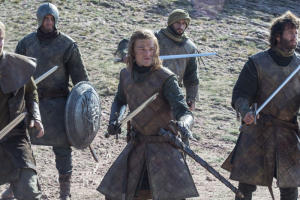 Bran and the Three Eyed Raven are watching two men sharpening their swords at the base of a tower, when more men coming riding up from a distance. When the men get to the tower, Bran recognizes one of the men that rode up as Ned. The Three Eyed Raven points out one of the other men with Ned as Howland Reed and Bran recognizes one the men guarding the tower as Arthur Dayne. Ned and Arthur exchange a few words about the Battle of the Trident – more importantly, why Arthur wasn’t at the Trident protecting Rhaegar. Arthur tells Ned that Rhaegar wanted them at the tower instead, which leads Ned to ask him the whereabouts of Lyanna. In response, Arthur prepares for the fight and wishes Ned good fortune in the wars to come – “And now it begins” to which Ned replies “no, now it ends” and a very well choreographed swordfight ensues. Bran realizes that Arthur is a better swordsman than Ned but knows that Ned beat Arthur from the stories he has heard over the years. But he finds out that Ned defeated Arthur because Howland stabbed Arthur in the back, which let Ned kill Arthur. There is a scream from the tower and Ned starts to rush up the stairs but the Three Eyed Raven tries to get Bran to leave. Bran wants to know what is in the tower so he shouts for his father, who stops and turns around, seemingly hearing something. But Bran is back in the cave and he is so mad – he doesn’t want to be in the cave and he doesn’t want to be a tree. The Three Eyed Raven tells him that he’s been waiting for a 1000 years for Bran so he can learn everything before Bran leaves the cave. No pressure. 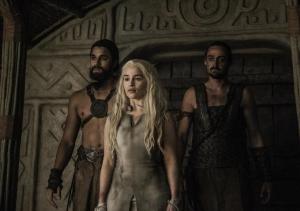 The Dothraki have made it to Vaes Dothrak and Dany is taken to the Dosh Khaleen. (Can we pause a moment and admire the fine Dothraki dudes?) In the Dosh Khaleen, the women undress Dany and give her the clothes that they wear. Dany tries to protest saying she’ll have them punished, yadda yadda. The lady in charge knows who Dany is and that she was married to Khal Drogo, who was supposed to conquer the world with Dany by his side, but you know what? The lady was also married to a great Khal who was supposed to conquer the world with her by his side. Shit happens, you deal with it. Dany was supposed to come to the Dosh Khaleen as soon as Drogo died but she didn’t; she roamed around instead so she’s not going to be just let in. The Khalasars are meeting to decide on many things: what villages they raid, who they enslave, and now, they will also decide whether or not Dany will be let into the Dosh Khaleen. Good luck Dany! 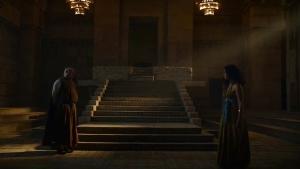 Varys is in the throne room, waiting for the Unsullied to bring him Vala, the Meereenese prostitute who has been helping the Sons of the Harpy. Varys assures her that he will not torture her, since torture gets answers but often wrong ones. Vala obviously is not happy about the foreign invaders in her city but Varys says he understand her perspective. However, he also wants her to understand his perspective and then casually mentions her son, Dom. Of course, Varys doesn’t outright threaten Dom but gives her an option to give him information about the Sons of the Harpy and go on living with Dom: he has arranged for their passage on a ship to Pentos, along with a bag of silver. 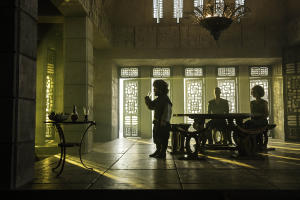 Tyrion is having a hard time having conversation with Greyworm and Missandei. Greyworm only talks about patrol and Missandei doesn’t seem to want to conversate or laugh at Tyrion’s jokes. They also don’t get the concept of games nor do they drink. Tyrion tries to get them to drink, to no avail, and then tries to get them to play a version of “truth or dare” without drinking but that doesn’t work either. Tyrion is rescued by Varys’ entrance, who tells them that the Sons of the Harpy are being funded by the Good Masters of Astapor, the Wise Masters of Yunkai, and people in Volantis. NBD. Greyworm is more than ready to go over to those cities and conquer them once more but Tyrion reminds him that if the Unsullied leave for war, they will not be able to defend Meereen. Missandei reiterates that the Masters only know and recognize force and brutality. Tyrion is still iffy on using force just yet. First he wants messages sent to the Masters through Varys’ birds. 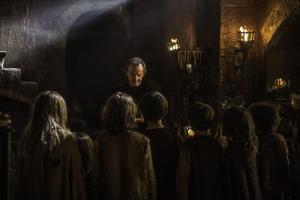 Speaking of birds, Varys’ little birds in Kings Landing have a new friend in Qyburn, who sees their importance and use (I was actually pretty worried when I first saw him with the kids…whew!). He bribes them with candied plums and takes care of their injuries. The kids are scared when Cersei and Jaime walk into the room with FrankenGregor in tow. Qyburn doesn’t divulge how exactly he made FrankenGregor but he and Cersei admit that FrankenGregor won’t be able to defeat the hundreds of Faith’s Militant at the beck and call of the High Sparrow. FrankenGregor will eventually have to fight in a trial by combat as Cersei’s champion and when that happens, he will be fighting only one of the Faith’s Militant (Clegamebowl?). Cersei also wants little birds all over the Seven Kingdoms because she wants to know about anyone and everyone who is talking shit about her. 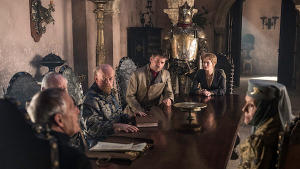 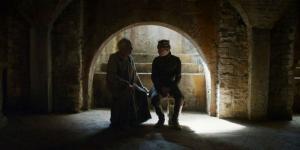 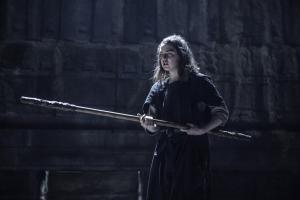 Arya is still training to be the next Karate Kid *insert karate training montage music*. The Waif is still beating on her and asking her who she is – they’re doing the thing where Arya tells her about her life to see if the Waif can catch the little lies she tells, and if she does, Arya gets whacked. She had 4 brothers, 1 sister – 3 brothers, 1 sister, and a half brother. The Hound died because she left him to die – he was on her list – he was but then she took him off the list – she was confused. The people on her list were Cersei, Gregor Clegane, and Walder Frey. While they are fighting, the Waif turns around to hit Arya with her stick but Arya stops it with her stick – now she’s ready to take on the Cobra Kai. Jaqen offers to give her eyes back if she tells him her name but she says “a girl has no name”. He takes her by the pool of water in the House of Black and White and give her a cup of the water from the pool. She is afraid at first because she has seen people dying after drinking the water from the pool but Jaqen assures her that if she is truly no one, she has nothing to fear. Arya drinks from the cup and when she finishes, she has her sight back. He again asks her who she is and she again tells him that she is no one. 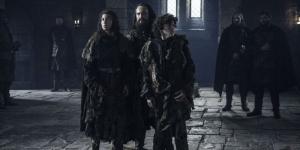 Smalljon Umber is at Winterfell, kind of pledging his allegiance to House Bolton because they will need help when the wildlings come south. He also knows very well that Ramsay killed Roose. He will not kneel before Ramsay nor kiss his ring but, in order to show that he can be trusted, he has brought Ramsay a small gift – in the form of Rickon Stark and Osha. When Ramsay questions the identity of Rickon, Smalljon shows him the severed head of Shaggyhead (or what I hope is a big wolf and not actually Shaggydog).

Back at the Wall, the men who stabbed Jon are at the gallows, waiting to be hanged to death. Jon walks up to them and asks them for their last words. Alliser says he tried to do the right thing and if he had to do it again, he would make the same choice – he seems to be okay with his fate. He is going to die but Jon died and got regenerated, so he will be fighting the battles for the wildings for a long time. Jon moves on to Olly, how has no last words but just an angry stare at Jon. Jon looks so sad and tired. He waits a while – I was afraid he wasn’t going to go through with the execution but he does. He cuts through the rope with Longclaw and the 4 men hang – we know they’re dead because we get a good closeup of their faces. After, he tells Edd to burn the bodies and gives the Lord Commander cloak to him, telling him to wear or burn it, Castle Black is Edd’s now. (But that’s not really how it works Jon – they have to elect the Lord Commander. YOU should know that, you JUST got elected not too long ago!) And then he walks off saying his walk has ended. Get it? Oathbreaker? Which, their watch ends at death and he already died, so technically his watch ended when he died. But technicalities.

Next Week: Book of the Stranger