A girl is somebody. 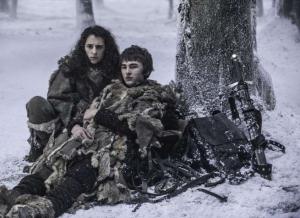 Meera is trying her darndest to pull the sled with Bran on it but her energy is spent. Meanwhile, Bran is having all these visions, including his fall from the tower, the Mad King, wildfire, Jaime killing the Mad King, Ned at the Tower of Joy, dragons, battle at Hardhome, etc. (If you want a detailed breakdown of his vision, check out Watchers on the Wall.) He also sees that the Others have tracked them and are catching up. He finally comes out of warging and tells Meera that they are fucked. They see the Others running towards them and get ready for certain death but some dude on a horse shows up and burns/busts up the first few Others. While they have a little bit of time, the horseman urges them to come with him because the rest of the Others will be catching up to them soon. He hoists Bran up and lays him across his horse, helps Meera on to his horse also, and they gallop off. 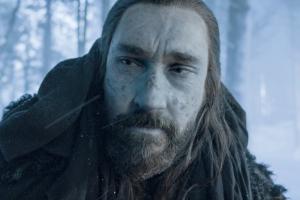 They stop for rest after they lose the Others. The horseman has hunted a rabbit and drains the blood into a cup. Meera asks him why he helped them and he says the Three Eyed Raven sent for him. The Three Eyed Raven is dead but now he lives again in Bran. The horseman a comment about how when he last saw Bran, he was a boy, climbing up things his mother told him not to climb. Guys, the horseman is Benjen Stark, Bran’s uncle and First Ranger of the Night’s Watch. He went to look for the White Walkers, who found them instead and stabbed him with a sword of ice. Before he turned into a Wight, the Children put a dragonglass into his chest and saved him. He seems to know what Bran has seen in his visions and tells him that he’s the Three Eyed Raven now. He has Bran drink the blood (gross) and tells him that the Night’s King will make his way to the Wall and when he does, Bran will be there waiting for him and he will be ready. Okay. 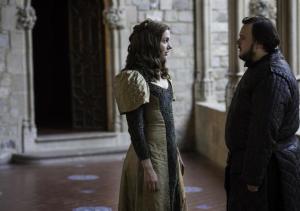 Sam and Gilly have made it to Horn Hill and Sam is the most nervous. He hasn’t told his family that Gilly is a wildling because Lord Tarly hates wildlings. Their plan is to tell his family that little Sam is Sam’s son so that his family will let Gilly stay there and help raise little Sam. At the house, they are greeted by Sam’s mother and sister, who are very nice to Gilly and genuinely glad to see Sam. His sister is to marry Simon Fossoway, who apparently has yellow teeth. Gross. Sam’s brother and father are out hunting and will be home for dinner. Sam’s sister offers to lend a dress to Gilly for dinner. 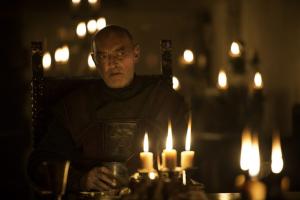 Gilly is all done up for dinner and apparently headed to an 80s themed prom. At dinner, Lord Tarly is so pissed that Sam is back. He seems like a loving father and a great person in general. Sam tries to make small talk about the venison they’re having for dinner and its obvious that his little brother, Dickon, is the son that Randyll Tarly actually wanted. They chat about hunting and that north of the Wall, if you don’t hunt, you don’t eat, but it’s mostly just rabbits and squirrels. He tells them that Gilly is a good hunter too, to which his sister says Randyll could learn a few things from Gilly’s father because Randyll wouldn’t let his daughters learn how to hunt. When Sam opts for a second helping of bread, Randyll’s meanness comes crashing down on Sam. John Bradley-West, who plays Sam, did a great job of portraying how scared and broken Sam feels as a result of Randyll’s abuse. Gilly tried to stick up for Sam but in the process, lets slip that she is in fact a wildling. Randyll is like “AW HELL NAW, I am not hosting no wildling up in my house”. His rudeness leads to Lady Tarly, Sam’s sister, and Gilly to leave dinner. Randyll says that Gilly can work in the kitchen and they will raise little Sam, but Sam has to leave the house at first light the very next day. Sam tries to say his goodbyes to Gilly and little Sam and walks out of Gilly’s chambers, only to walk right back in a few moments later. He is in a “fuck all this” mode and says that they belong together, wherever they go. On their way out, he also grabs Heartsbane, the family’s Valyrian steel sword. Fuck you, Randyll, you dick. 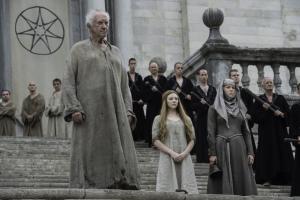 Tommen is hanging out with the High Sparrow, talking about Margaery’s upcoming walk of atonement. Tommen is worried about her safety, but the High Sparrow assuages his fears saying she will be protected and that she is more loved by the people so they will probably be gentler with her than they were with Cersei. Apparently Marg is very devoted to the gods now. The High Sparrow offers to let him see her. Tommen has missed her so much and Marg says they will be together soon and things will be better than before. She also says the High Sparrow is not the person they thought he was – he’s more…he looks at the world differently. Marg has had time to think about things; she was very good at seeming good – feeding the poor and making sure she was seen doing it. She is letting go of all the lies now. She still thinks the world of Loras but thinks that his sins obscure his purity – he also needs to atone for his sins just like everyone else. 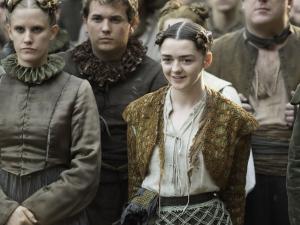 In Braavos, Arya is watching the Purple Wedding scene of the play and she’s the only one laughing at Joffrey’s death. However, she sees that Lady Crane is a better actress than the lady playing Sansa, who is in the background, mouthing the dialogue as Lady Crane acts it out. Arya heads backstage and pours the vial of poison into Lady Crane’s rum. She is headed out when the actors file in backstage but Lady Crane recognizes her as having been in the audience the other day and asks if she paid, which Arya hadn’t. Lady Crane tells her that she also snuck in to watch the plays as a child and loved it so much that she ran off to join them. Arya compliments her on her acting and Lady Cranes tells her that she does what she can but the writing is not good. Arya advises her to change it; Cersei has just lost her son, so she wouldn’t just cry and lament. She would be angry. Lady Crane asks Arya her name (Mercy) and whether she likes pretending to be other people. Arya realizes that she shouldn’t be talking to her so she takes her leave. Inspired by the chat with Arya, Lady Crane tells her co-actors that she has ideas about the play, which pisses off the dude who wrote it. She is just about to drink the poisoned rum when Arya barges back in, knocks it out of her hand, and warns her about the other actress, saying that she wants Lady Crane dead. The Waif witnesses all of this. Arya has failed her second chance and she knows it, so she goes to fetch Needle from its hiding place. Back at the House of Black and White, Jaqen is cutting and peeling off the face of a dead person. The Waif tells him of Arya’s doings and Jaqen agrees to let the Waif kill Arya. Arya waits in her chamber, in the dark, with Needle. 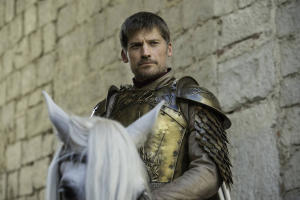 The Tyrell army marches through Kings Landing and Mase looks the silliest in his armor and plumed helmet. He makes an “inspiring” speech to his troops while Jaime waits thinking “oh for fuck’s sake”. They march to the steps of the Sept, where the High Sparrow is waiting with Marg in order to start her walk of atonement. Jaime order the High Sparrow to let Marg and Loras go or face certain death, along with all of the Faith’s Militants. At first, it doesn’t seem like the High Sparrow will back down and a slaughter is about to happen but he tells Jaime that there’s no need because the walk of atonement will not happen. Seems Marg has recruited a pretty important person to join the cult: King Tommen. I couldn’t really tell if this is Marg playing the High Sparrow or the High Sparrow playing Marg. I guess we will find out eventually. 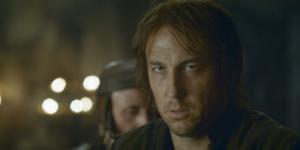 Back at the Red Keep, Tommen releases Jaime from being a Kingsguard. He is to go to the Riverlands and deal with Brynden Blackfish on behalf of Walder Frey “because he is 400 years old”. Walder Frey is making his sons try to take Riverrun back from Brynden but he needs help. He does have Edmure Tully as leverage, though. Jaime is not cool with this and does not want to go to the Riverlands at all. He wants to pay Bronn to gather the best killers he knows and he’s going to kill everyone at the Sept. Cersei tells him to chill because if he kills the High Sparrow, he won’t survive himself. She tells him to lead the Lannister army and take back Riverrun. She doesn’t need him to be at the trial because she has the Mountain to be her champion. And then they make out a bunch. 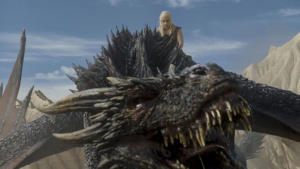 Dany &  Co. are still riding towards Meereen – they still have a week of riding to go. She’s going to need a LOT of ships to get all of her army to Westeros. She has an idea churning in her head so she tells them to wait for her return and gallops off. Seems like they wait for a while and eventually, Daario starts to ride off to look for her but then a freaking dragon comes flying overhead. IT’S DROGON AND DANY IS RIDING HIM. She tells her Dothraki army that instead of picking 3 bloodriders, she chooses them all. She’s going to ask of them more than any Khal has asked his khalasar – she wants them to ride a wooden horse across the sea to fight men who wear armor and tear down their stone houses. Man, the Dothraki are like “FUCK YEAHHHHH”. This speech is basically their Independence Day speech but if a lady riding a dragon asks you to join her club, are you really going to say no?

Next week: The Broken Man