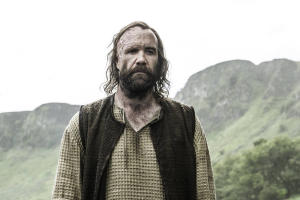 A bunch of people are hanging out, building stuff, cooking stuff, and carrying stuff. But wait, that tall dude is carrying a whole tree by his dang self! Who is this strong, tall man? ITS THE HOUND! If you remember, the Hound lost the fight with Brienne and was left to die by Arya at the end of season 4. Apparently, Septon Ray came across the Hound, who appeared to be dead, while traveling with his flock – only the Hound wasn’t dead. They tried to get him better and feared he would die a dozen more times but the Hound survived and is now doing pretty well. The Hound tells the Septon that he survived because of hate – he’s got some real strong ass hate in his heart that kept him from dying. The Septon tells the Hound that he has clearly been given a second chance for a reason. When the Hound asks why was given his chance and not punished for the things he did in his past, the Septon says he’s already been punished. Dude, remember when you were almost dead and had maggots and crap crawling on you? I’m pretty sure you can chalk that up as punishment. This Septon also seems different than the High Sparrow in that he doesn’t talk about religion and God as though he knows everything – he doesn’t know which gods are the right one. The only thing he knows is that there is a higher power. 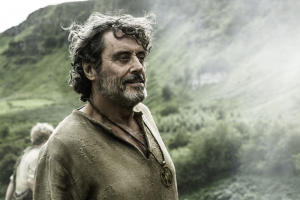 Later, while the Septon is preaching about how violence is a plague that spread between people and that it is never too late to change oneself, the group is visited by men from the Brotherhood without Banners, and they inquire about food, gold, and iron. When the Septon tells them they don’t have iron or gold but they can share the food, the men leave after telling them to stay safe because “the night is dark and full of terrors”. With the Septon refusing to take up arms against what is clearly a threat, the group goes about their business. Sandor is chopping more wood in the woods when he hears a distance scream. When he gets to where his group was, he finds them all slaughtered and the Septon hung. Sandor grabs his ax and he’s probably going to kill him some dudes. The Hound is baaaaaaaaack. He is no longer broken.

Margaery is reading the Good Book, this time a verse about mothers. The High Sparrow compliments her on her knowledge and ability to learn quickly. She reiterates how she used to pretend to love and help the poor when in reality, she merely pitied them and was disgusted by them. The High Sparrow gets it; he says we are disgusted by them because the poor are ourselves without the fine clothes and the perfume. He also inquires after a private matter: why hasn’t she been boning Tommen since she’s been out – she has a duty as a Queen and a wife. She tells him that she is no longer driven by the desires as she was in the past and he tells her that “congress does not require desire on the woman’s part, only patience”. In other words, she doesn’t need to want to have sex – just needs to be patient enough to let him finish because she needs to make an heir. Oh okay, cool. Also, their vibe was kind of weird – dare I say, sexually tense? – but maybe I’m just reading it wrong. As a parting word of advice, he says that he hopes that Olenna follows her path before something bad happens to her. 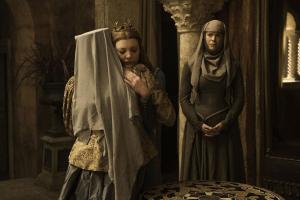 Marg goes to see Olenna, with Septa Unella in tow. Olenna wants to speak with her granddaughter alone but Unella is ever present. She tries to move to another room (open and adjacent to the first one) but Ulenna only follows suit. She tries to threaten Unella but to no avail. She cannot understand what has happened to her granddaughter and why she is in line with the High Sparrow. Olenna wants Marg to leave but Marg isn’t budging; instead, she tells Olenna that she needs to go. Kneeling down to hold her hand, Marg slips a piece of paper in Olenna’s hand whilst insisting that she go home – her eyes tell Olenna that it is imperative she go home. She finally relents and leaves the room. When out of the room, she opens the parchment Marg pressed in her hand – it is a rose, the sigil of House Tyrell and it lets her know that Marg isn’t gone from them after all. Side note: I wonder if Unella thought it was weird that Olenna suddenly relented when she had been so steadfast on not going home the whole time. 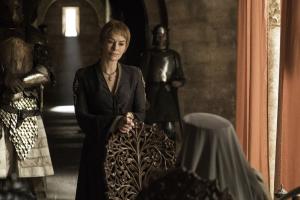 Cersei visits Olenna and bid her adieu but Olenna wants none of her shit. She reminds Cersei that basically everything that is going on in the city is her fault. Cersei admits to as much but also proposes to fight the fight together. Olenna is like “girl, look, you are like one of the worst people I have ever met in my whole long life.” She has not forgotten how Cersei smirked when Loras and Marg were dragged into the cells and she’s not down to clown with Cersei. She’s leaving King’s Landing and advises that Cersei do the same.

In the North, Jon and Tormund are trying to convince the wildlings to join them. The wildlings don’t want to join them because its not their fight – they won’t be fighting against the white walkers. Jon gets it but at the same time, he explains to them that if he loses to the Boltons, the Boltons will come kill all the wildlings, so if they want to live long enough to face the white walkers, they need to help him defeat the Boltons. Tormund adds that Jon died for them and if they’re not willing to do the same for him, they are cowards and they should be the last of the Freefolks. You know who is down for Jon? Wun Wun. Then the other wildlings also agree to join. 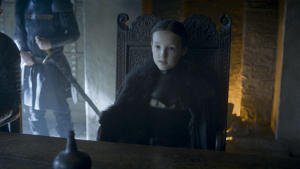 They go to Bear Island and get an audience with hard ass Lyanna Mormont. She is unmoved by the words of Sansa and Jon and boy does she put them through the ringer. She doesn’t care about growing up to be beautiful. Jon is a Snow and Sansa is a Bolton or a Lannister. She has to look after the people of Bear Island and why should she sacrifice more people to fight “Stark” wars? She so sassy and strong. Davos steps up and tells her that the North needs to be united if they are going to fight the Night King, because the white walkers are coming. She likes what Davos has to say and relents saying House Mormont will not break from House Stark and pledges a whopping 62 men. This made me think about the Lord of the Rings: Two Towers movie, when the Elves came to join the Men for the Battle of Helm’s Deep. 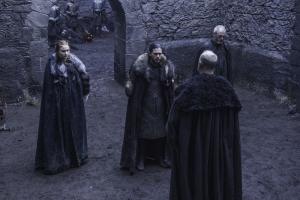 They also visit House Glover but are not as lucky. Lord Glover lost a lot during Robb’s war and the Bolton’s helped him get his castle back, so no thanks, he will not be joining you all. Sansa’s naivete and romantic idea of house allegiance and “the North Remembers” shows again when she reminds Lord Glover that his house is pledged to help House Stark. Jon is like “ugh not this, Sansa” but Lord Glover lets her have it. Dude has lost his brother, his wife, and his kids and here’s Sansa talking about “duty” and “allegiance”. Davos was right – after a certain point, people want to protect themselves and their families and allegiances fall by the way side. They’re going to have to march on Winterfell with the small army they have but Sansa wants more men and is making fun of Davos. Lyk, serrsly Sansa? Jon is like BRO, THIS IS WHAT WE GOT, OKAY? So, Sansa writes a note and seals it with a Stark seal – is she writing to Petyr to ask for assistance from the Vale? (Lyanna Mormont is with her men, how badass is that??) 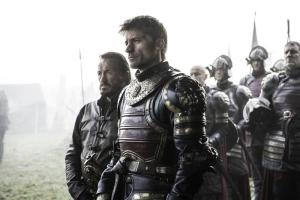 Jaime and Bronn make it to Riverrun, where the Frey host is doing a terrible job of protecting their camp. The Lannister army straight strolls in to their camp. The two Frey sons are making a thing about threatening to kill Edmure by hanging him. When Blackfish doesn’t yield, they take the noose off and threaten to slit Edmure’s throat but Blackfish just tells them to do it and walks off. BOOOOM. Of course they don’t kill Edmure and Blackfish probably knew that, or didn’t care. Jaime criticizes their camp and takes over their siege (after humiliating Walder Frey). He orders them to bathe and feed Edmure. He meets with the Blackfish to parlay and tells him to surrender, since the war is over. Riverrun is Blackfish’s home and he wants to live protecting it or die. The Tullys have 2 years worth of provision so they’re going to stay put. The Blackfish had no intention to surrender; he just came to talk to Jaime because he was bored and because he wanted to size Jaime up – he was not impressed. Side note: I love the Tully armor – they look like fish scales. 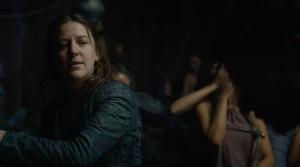 Yara, Theon, and their men are in Volantis, hanging out in a brothel and Theon does not like it. He is so afraid of Ramsay or Euron coming after them. Yara makes Theon play a weird drinking game where she tells him she will protect him, drink; that they will get revenge, drink; and that he needs to come back from being the broken man he was to being Theon Greyjoy again, drink. He tells her that he is with her and that he will help her take the Iron Islands back. He is on his way to not being a broken man. 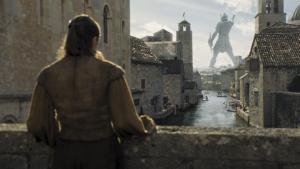 Arya is in regular clothes now, strolling the streets of Braavos when she hears two Westerosi men talking about the Greyjoy fleet in Slaver’s Bay. Arya asks to buy a passage back to Westeros. The men laugh her off, saying she can’t afford it and she clunks down a pouch of coins. The man offers her a hammock in steerage, so she plunks down another pouch of coins, telling him that she will have a cabin and they will leave at dawn. She is looking out at the Titan of Braavos, when an old lady calls out to her. When she turns to face the old lady, she swings a knife at Arya, holds her, and stabs her multiple times, including twisting the knife whilst inside Arya. She takes her face off, revealing herself to be the Waif. Arya headbutts her, leaps off the bridge and into the water below. The waif watches for Arya to resurface but she doesn’t. Arya does resurfaces further down the waterway. She walks the streets of Braavos, bleeding from her stomach and in sight of everyone but no one stops to help her. Not a good episode for Starks.

Next week: No One.