HBO has revealed the first Season 6 promotional picture, in which Jon Snow is featured with blood on his face. 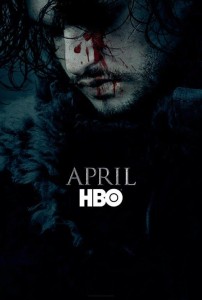 If you somehow forgot the traumatizing scene from last season, the Nights Watch brothers stabbed Lord Commander Jon Snow real good and the season ended with Jon bleeding out.  Is he dead? Is he alive? WHO KNOWS?!  Season 6 will premiere April, 2016