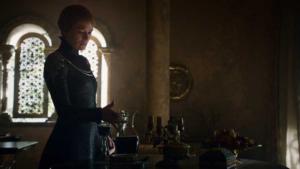 King’s Landing is preparing for the trials of Loras and Cersei. People are getting ready for the Sept, including Tommen and Cersei with her bomb-ass outfit, looking like she’s ready to WAR. Tommen makes to leave for the Sept but the Mountain does not allow him to leave. The Sept is filled with all the important folks including Margaery, Mace Tyrell, and Kevan Lannister. There, Loras confesses to his sins, renounces his titles and claim to Highgarden, and pledges his life to the Faith. As a result, he gets the symbol of the Seven carved into his forehead, which infuriates Margaery and Mace but the High Sparrow reassures them that Loras will be free to go after Cersei’s trial. However, Lancel informs the High Sparrow that Cersei has not even left the Red Keep. Maester Pycelle was on his way to the Sept, when he is stopped by a child who whispers something in his ear and leads him to a room below the Sept, where he encounters Qyburn. He apologizes to Pycelle about the “inconvenience” before a bunch of kids stab Pycelle to death. 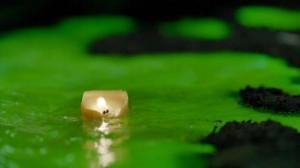 Margaery realizes that neither Tommen nor Cersei are at the Sept and points this out to the High Sparrow and tells him its a trap but he brushes it off. She tries to leave the Sept with Mace but the Sparrows do not allow anyone to leave. Meanwhile, Lancel, who was entrusted with the task of fetching Cersei from the Red Keep, is lured below the Sept by one of Qyburn’s birds. As he follows through the maze underground, he comes to a room stacked with barrels. While Lancel bends down to pick up the torch left behind by the child, the child comes up from behind, stabs Lancel in the spine, and runs off. While writhing in pain, Lancel finally realises that the barrels contain wildlife and that there are 3 candles at the end of the room that are about to light the wildfire cache. He desperately tries to army crawl his way to blow out the candles but he fails and the Sept blows up, killing everyone in and around it. Cersei watches the explosion with a smug smile and a glass of wine. Tommen sees the explosion too but has a different reaction – he takes off his crown and jumps out of the window to his death. 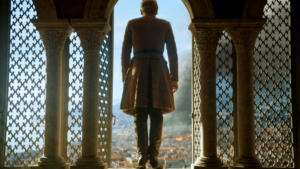 The music through the whole King’s Landing scene sequence is on point – the calming music juxtaposed with the explosive (see what I did there) scenes is a great touch.

Having “won”, Cersei has Septa Unella taken captive and strapped down to a table. She waterboards the Septa with wine and “confesses” her sins to her. When the Septa tells her that she’s not afraid to die, Cersei goes – oh girl, you ain’t gonna die now…I have much more planned for you. She leaves the Septa in the room to be tortured by the Mountain and, as she leaves the room, Cersei proclaims “Shame! Shame! Shame!” 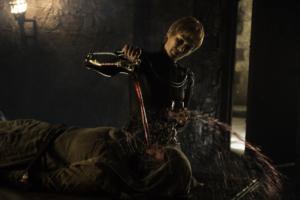 Her excitement about her “win” is short lived as she views Tommen’s body. Despite Qyburn’s protests, she insists on seeing his face. She tells Qyburn to burn Tommen’s body and bury it at the site of the Sept, where his grandfather and siblings are buried.

Meanwhile, her brother/boyfriend, Jaime, is at the Twins, celebrating with the Freys. A serving girl is making eyes at Jaime which makes Bronn sour about how Jaime getting all the girls until Jaime calls the girls over to talk to Bronn and then he’s like “well alright”. Walder talks to Jaime about their “shared” victories, which doesn’t rub Jaime the right way and Jaime asks about Walder’s history in battles. Jaime takes offense when Walder tries to equate their battle experience and asks him if the Lannisters have to show up every time to defend the Freys, is the partnership really worth it?

After most of the feasters are gone, Walder is alone in the great hall and complaining about how his sons are terrible. The serving girl that was staring at Jaime earlier is serving Walder and he assaults her just for funsies. When he starts complaining about his sons, she goes “well they’re here my lord” and points to the meat pie in front of him. Oh, his sons are just ground up into the pie that he has been eating…NBD. Also, the serving girl is fucking ARYA STARK. She tells him that she wants him to know that so a Stark face will be the last face he sees before he dies and SLITS HIS FUCKING THROAT. YASSSSSSSSSSSSSSSSSSS. 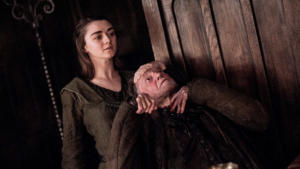 Jaime eventually gets back to King’s Landing as her sister/girlfriend is getting coronated and all he can think is “wtf have you done?”. 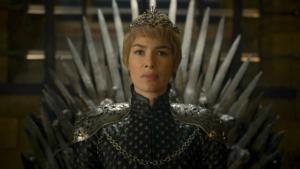 Ellaria and the Sand Snakes meet with Olenna, who is so fucking sassy. She had very few fucks to give before but, now that her whole family is dead, she literally has NO fucks to give. When Ellaria brings out Varys to convince her to back Dany, she is ALL IN for Fire and Blood. 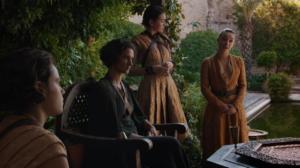 Sam, Gilly, and baby Sam arrive at Oldtown, just as the white ravens are leaving the Citadel. The dude at the library has no fucks to give for anyone in the world and he definitely has no time for this dude from the Wall who didn’t have time to update the Citadel about the Wall HR. Oh also, the library in Oldtown is fantastic.

Jon is giving Melisandre the grand tour of Winterfell when Davos strides in and throws Shireen’s roasted stag to her. He explains to Jon that Melisandre was complicit in burning the Princess at the stake. While she tries to defend herself saying Shireen’s parents burned her as well and that Melisandre just made a mistake, Davos reminds her that they all died because of what she told them, regardless of her “mistake”. Instead of executing her, Jon tells Melisandre to go South while Davos tells her that he will kill her if he sees her in the North ever again. 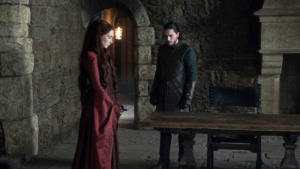 As Jon and Sansa watch Melisandre leave, they have a conversation about trust. Jon asks Sansa if she trusts Littleflinger, which she scoffs at, saying only a fool would trust him. She apologizes for not telling him about the the Knights of the Vale. Jon tells Sansa that they have to trust each other because they have too many enemies. When Jon goes to leave, Sansa informs him that they received a white raven from the Citadel – winter has come. Jon smiles and says “Father always promised.”

Petyr (Littlefinger) finds Sansa in the Godswood and basically proposes marriage to her – he sees himself on the Iron Throne with her beside him as his Queen. She’s like ‘yeah that’s a nice dream but you’re creepy AF so no thanks’. Before she leaves, he tells her that she’s the rightful heiress to House Stark, not Jon Snow – basically trying to grow a wedge between her and Jon.

Beyond the Wall, Benjen leaves Bran and Meera at a weirwood heart tree near the Wall. He can’t go any farther because the Wall has its own magic that keeps him away. After Benjen leaves, Bran places his hand on the weirwood, against Meera’s wishes. Bran is back at the Tower of Joy with Ned running up the stairs, finally reaching Lyanna, who is in poor form. She is covered in blood and isn’t sure if Ned is real or if she is hallucinating. After he assures her that he real, she makes him promise to protect her newborn baby from Robert. Ned is handed the baby, who opens his eyes in Ned’s arms and the focus from the baby’s eyes changes to the focus to Jon Snow’s eyes. What Game of Thrones fans have been speculating for years real. L + R = J CONFIRMED. Jon is the son of Lyanna Stark and Rhaegar Targaryen. 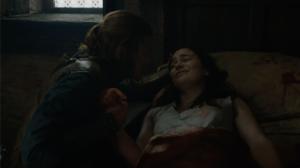 In the Great Hall of Winterfell, Jon and Sansa are holding court with the rest of the Northern Houses, who are making the case for going home because winter has come and there won’t be fighting for long. Jon gets up and says DUDE the person who brings the winter storm is literally the person we are fighting. Jon and Sansa seem pretty defeated when Lady Mormont stands up and gives the best speech I’ve ever heard in 10000 years. She calls out Houses Manderly, Glover, and Cerwyn. She says, “But House Mormont remembers, the North remembers. The North knows no king but the King in the North whose name is Stark.” She goes on to say that she doesn’t care that Jon is a bastard – as long as there is Stark blood in him, he is the King for her (why not a Queen in the North??). After Lady Mormont, Lords Manderly and Glover rise up and declare themselves for Jon as King of the North, and so do the rest of the people in the room. There is a a questionable moment with Petyr and Sansa…I guess we just have to wait and see how it works out. 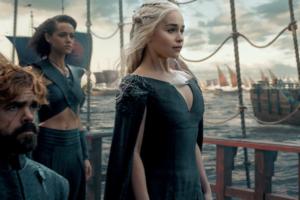 Meanwhile, in Mereen, Daario is ready to go to Westeros but Dany is like, boy no – it was fun and I love you but you have to stay here and take care of shit. Tyrion is awaiting the aftermath of this conversation, which he advised for – Dany tells him that it is for the best but she is also concerned that she is not sad about Daario’s departure. Tyrion then tells her that he has never believed in anything as much as he believes in her. Dany understands Tyrion’s devotion to her and surprises him with the Hand of the Queen brooch, seeing which he kneels to her. 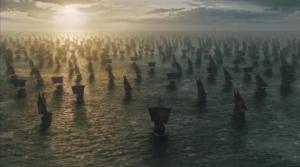 The season ends with a bunch of ships sailing towards Westeros – ships emblazoned with crests of houses Tyrell, Greyjoy, Martell, and Targaryen, as well as the Unsullied and the Dothraki – with the 3 dragons flying besides them.