A huge couple of weeks with an incredible number of issues hitting the stands. Moon Knight’s latest arc kicks off, while Batman closes it’s first. And the wonderful Bounty has yet another brilliant issue. 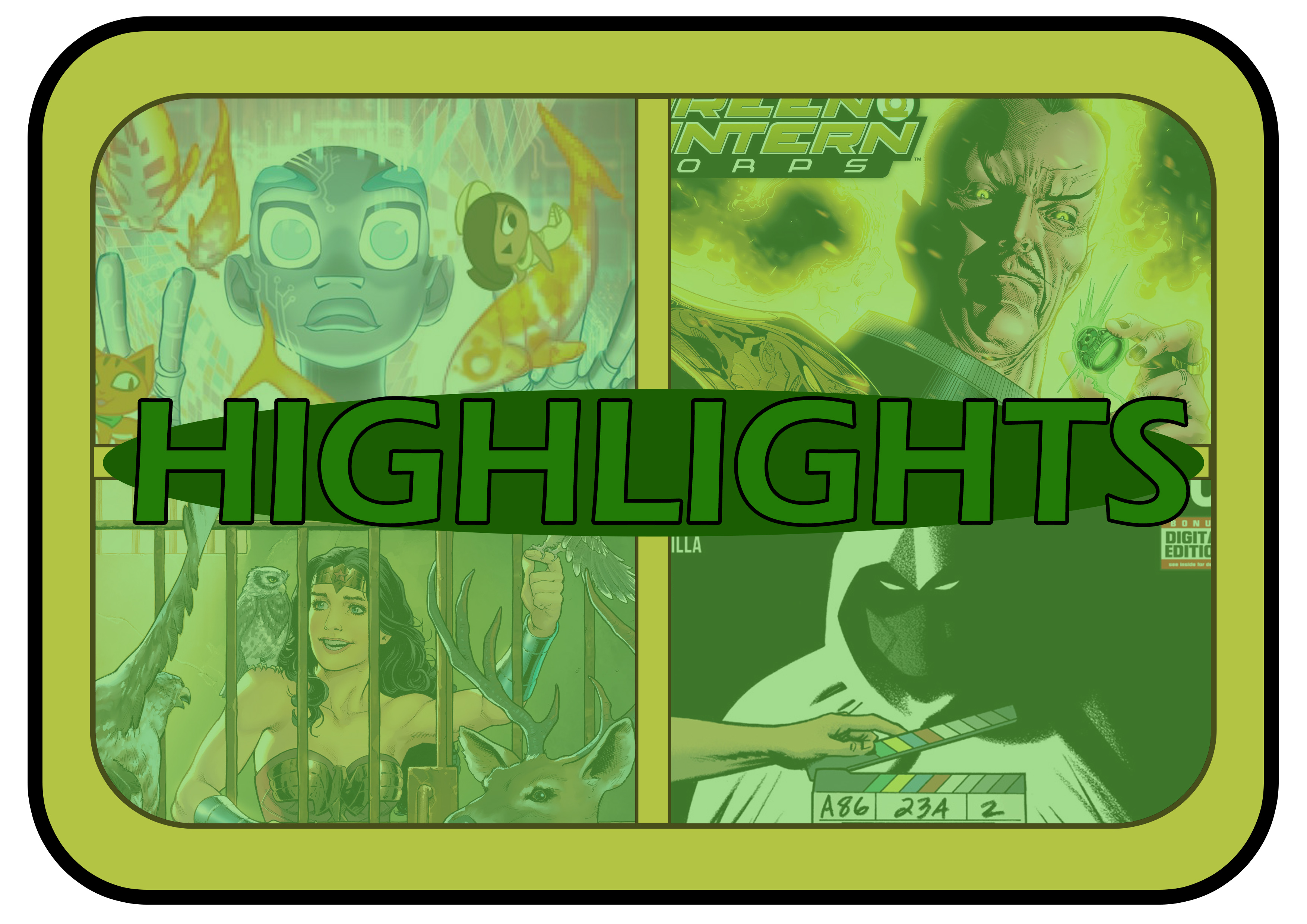 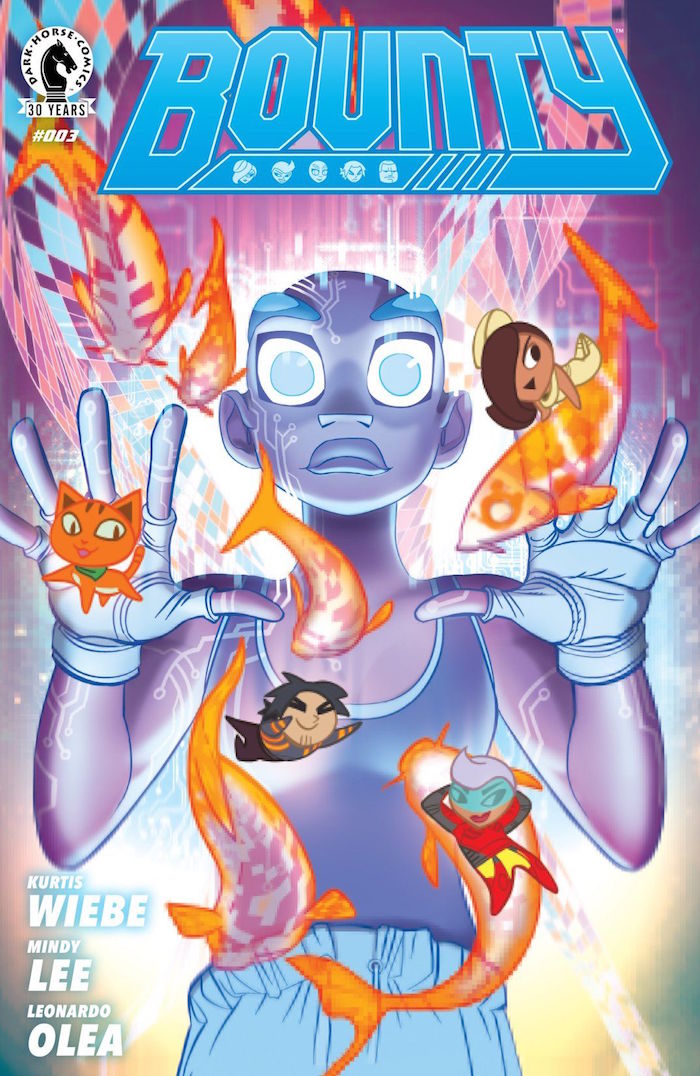 Bounty, after what feels like forever (though most likely just a month), is finally back. And it is of course, better than ever. One of the biggest strength’s behind one of Kurtis Wiebe’s other series, Rat Queens, was its characters. Each one of the Rat Queens are really badass and are characters you want to read about. Just so with Bounty, and this month Kurtis Wiebe takes a little time to give our heroines a little bit of a breather. After a first couple issues filled with exposition, chases and thrills, a bit of downtime is appreciated, as is the brief backstory we’re treated to. It’s not too long, but gives a good sense of where Nina’s come from, even it does raise a thousand questions as to why she was there in the first place. 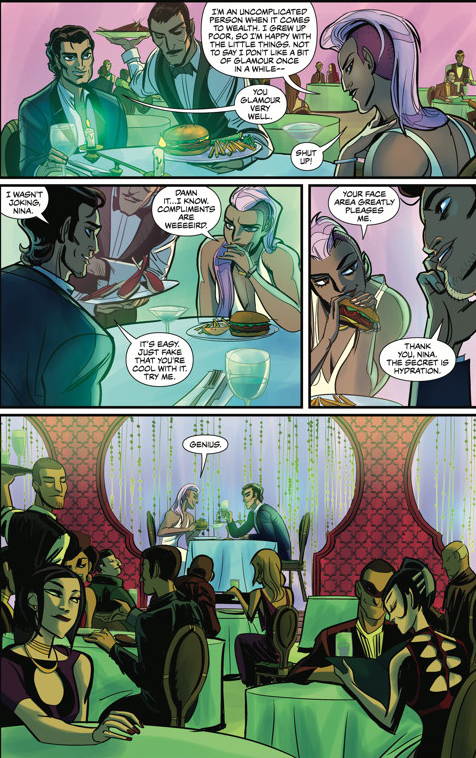 Speaking of questions, Wiebe does a great job this issue of making me go ‘wait a second’, with the way he teases out various details of the sci-fi world he’s created. What are the extent of Vivian’s abilities? What’s the deal with the corporations? What were the Gadflies really doing before they were brought so low? Such is the strength of Wiebe’s characters and story that I’m not frustrated at his drip-feed of information, I’m ravenously curious. The art this month is spectacular and its neon infused brilliance is not to be missed. I particularly appreciated the ‘pew’ sound-effects about half way through, and really, you should read just for that. Another stand-out issue in a stand-out series. 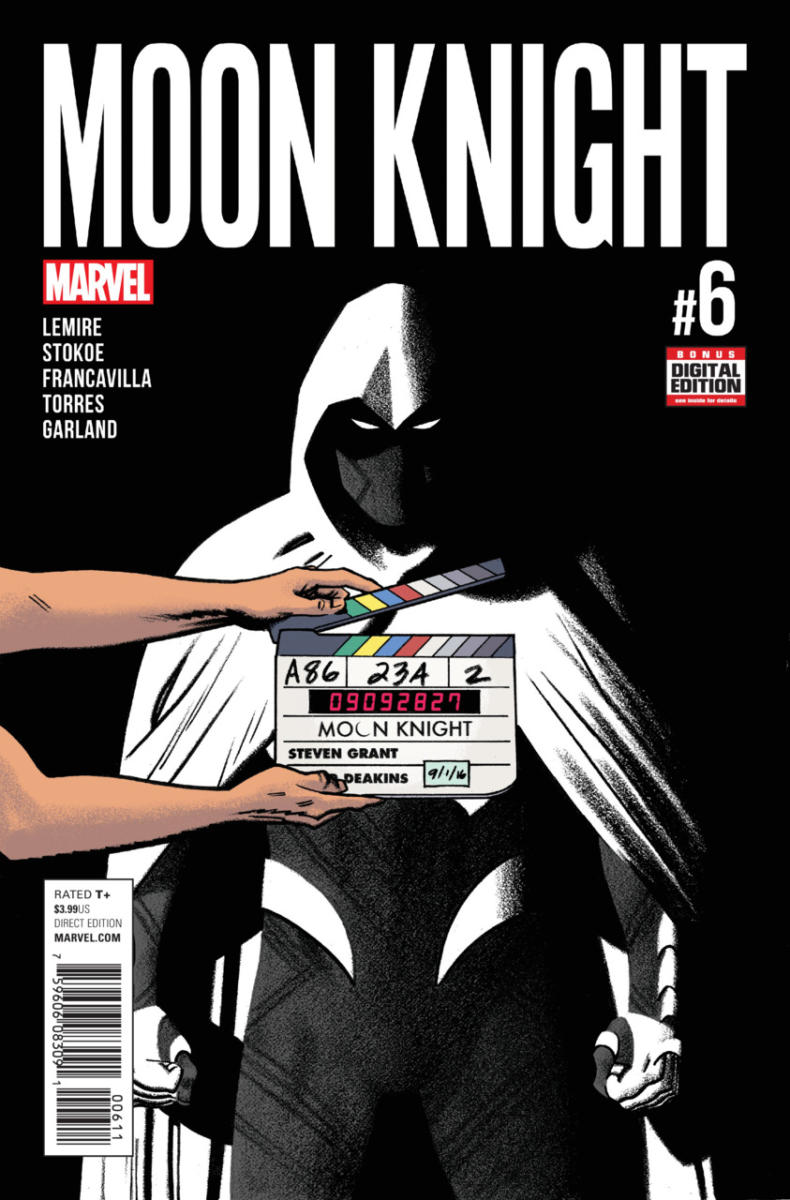 I’ve never been really too sure how to classify Moon Knight. When I first picked it up, I was expecting a typical fantasy-infused superhero story from a great writer. What unfolded was not only much better than that, but much, much stranger. That, I suppose, is this month’s issues key word; strange. If you’re not a sucker for a bending narrative and complete and utter ambiguity, stay away. The previous issue of Moon Knight did feel a little weak, especially near the end, but this month more than makes for it. We take a tumble through the many lives, personalities, stories and art styles of Marc Spector; all the while (just like Marc) completely unsure what is actually real. Jeff Lemire’s story is still just as confusing and compelling as it was in the first issue and despite not being fully aware of where it’s all going, it’s still a great read.

Shifting the story from Marc versus the world to Marc versus possibly his own mind is a great way to shake things up, and I’m excited to see where it goes from here. The art this month is nothing short of spectacular. While we may have said goodbye to Greg Smallwood’s crazy panel layouts, the switch up in art styles more than makes up for it. As the story progresses, one can only hope it happens with greater frequency. While the bizzaro narrative may not be to everyone’s taste, the sheer quality of Moon Knight this month can’t be doubted and now is a great time to jump on. 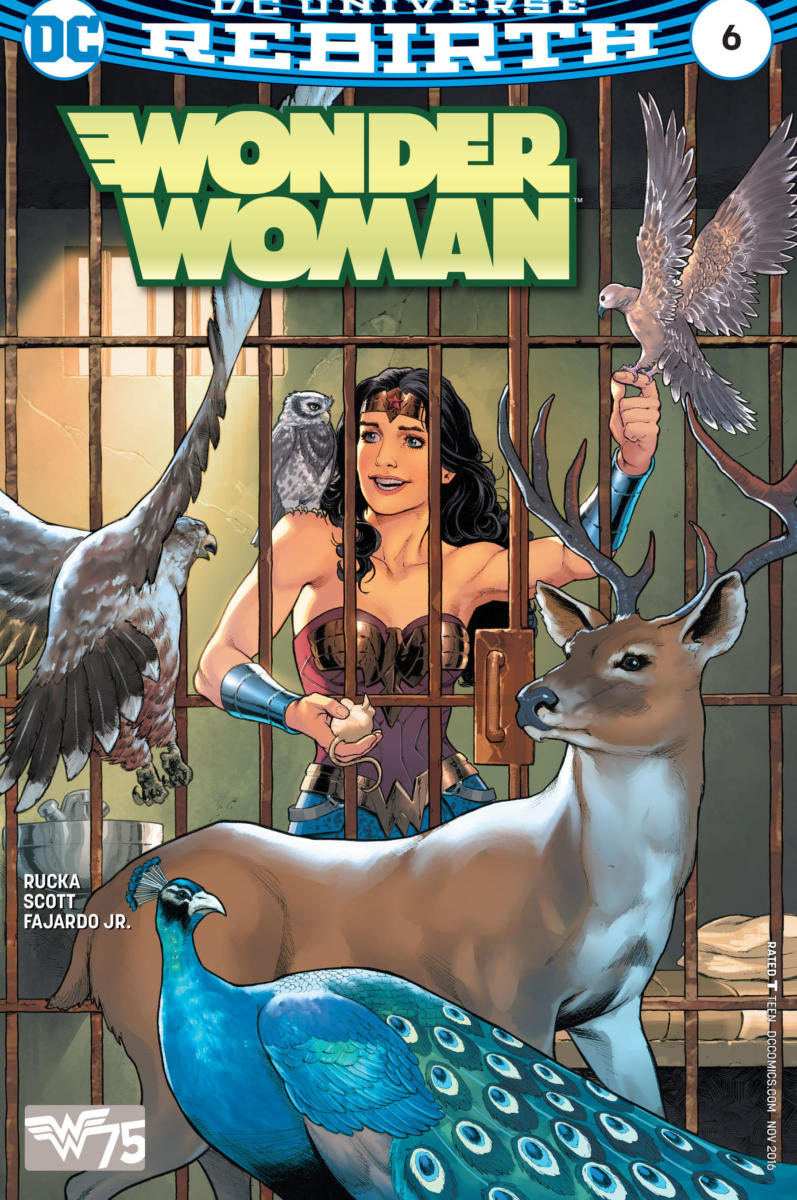 It’s almost a routine at this point. Another issue of Wonder Woman hits the stands, it’s amazing and wonderful and I can’t help but gush about it. This month, sorry to say, is no different. ‘Wonder Woman: Year One’ is a fantastic look at Wonder Woman’s first foray into the world of man. After the first two parts covering Diana’s last days on Themiscyria, we finally get to see her first steps (literally) into the world of man. It’s an interesting treatment with Diana immediately at odds with the world around her, not knowing how anything works, or even the language. She is of course arrested by the military and immediately confined to a cell, a fairly powerless position for such a strong hero to be in. It actually works as we then get a handful of mortals discussing Wonder Woman, providing a different perspective on her. I really enjoy this approach as it reinforces one of her key traits, for all her human-ness, Wonder Woman is still an outsider. She wasn’t raised in Kansas, or in Gotham City; Wonder Woman is well and truly an alien; and I can’t help but think that’s occasionally left by the wayside. 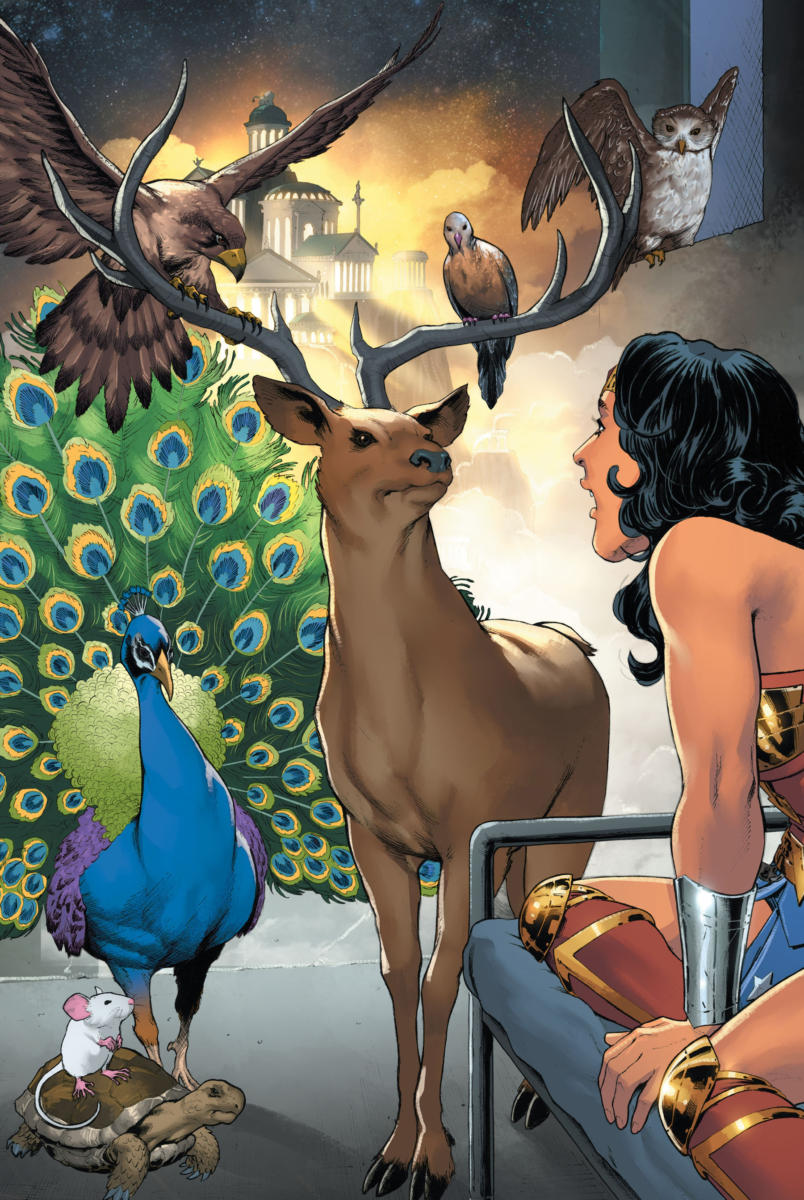 Nicola Scott is also quickly transforming into one of my favorite artists, and her pictures this issue are top-notch. Crisp, clear lines; bold colors and a version of Diana that’s both innocent and powerful. What I really like here is that we as the audience know that, at any time, Diana could fight her way out. But she chooses not to. She’s just confused about what on earth is going on. Both storylines (Year One and The Truth) are only half-way done, and I seriously can’t wait for the next half. 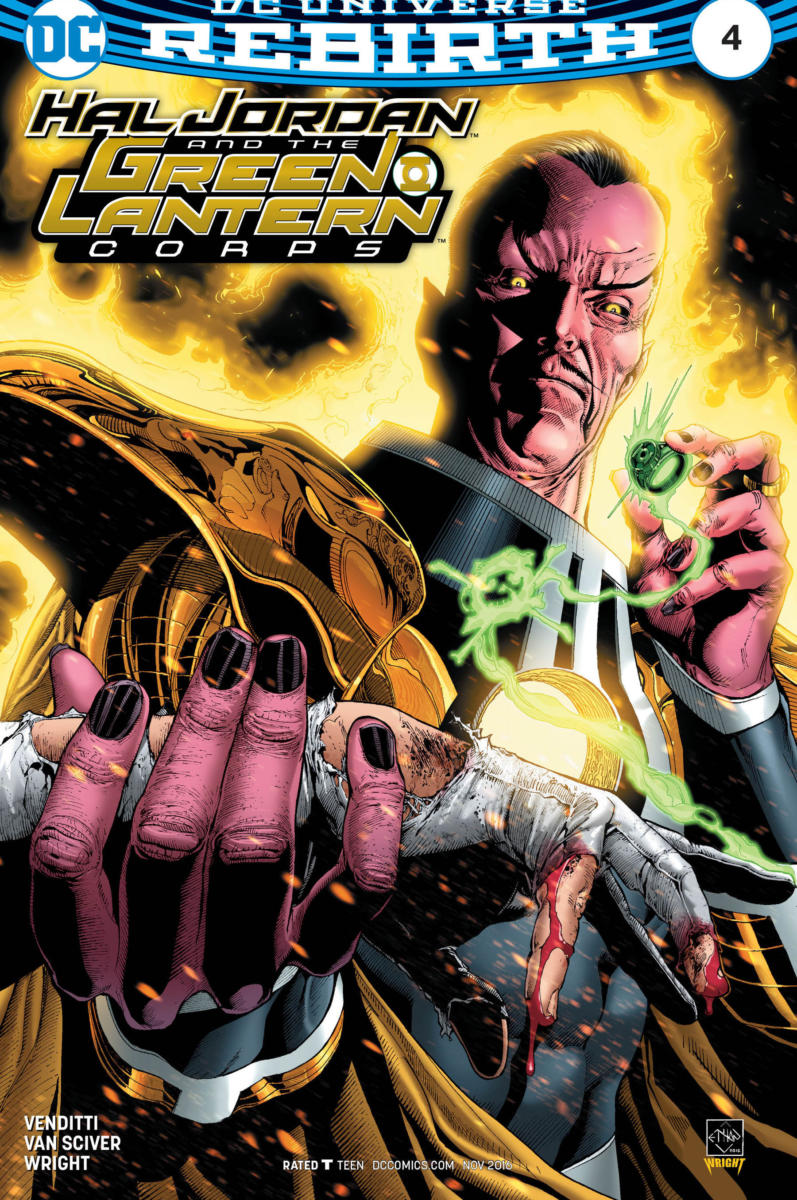 Hold up one second, I need to check outside for blood red skies and flocks of crows as somehow a comic written by Robert Venditti was one of the best this month. But it’s true. The latest issue of Hal Jordan and The Green Lantern Corps (which still sounds like a sci-fi knock-off of Jose and the Pussycats) is actually very good. It’s an ever so slightly off-the-wall sci-fi story that, as far as I can tell, has it’s tongue firmly in its cheek.

That’s not to say the story is funny or ridiculous, far from it. Rather, it’s heroes are brave, it’s villains are mustache twirlers and we’re presented with a splash page of something called the fear engine. It’s both a story with a lot of heart and punch to it, while also being an issue that I can in no way take seriously. And that’s why I loved it. On top of that, Venditti seems to have finally gotten the hang of actual dialogue and the whole thing is far easier to read than some of his past work. Rounding it all off is Ethan Van Sciver’s peerless artwork. I’m probably a little biased as I already like his work, but his pencils on this month’s issue are nothing short of brilliant. There is a bizarre level of detail to his work and no less than 3 splash pages and the stylistic feel he brings helps make the issue what it is. To completely do a 180 on my previous opinion, go grab this one now. 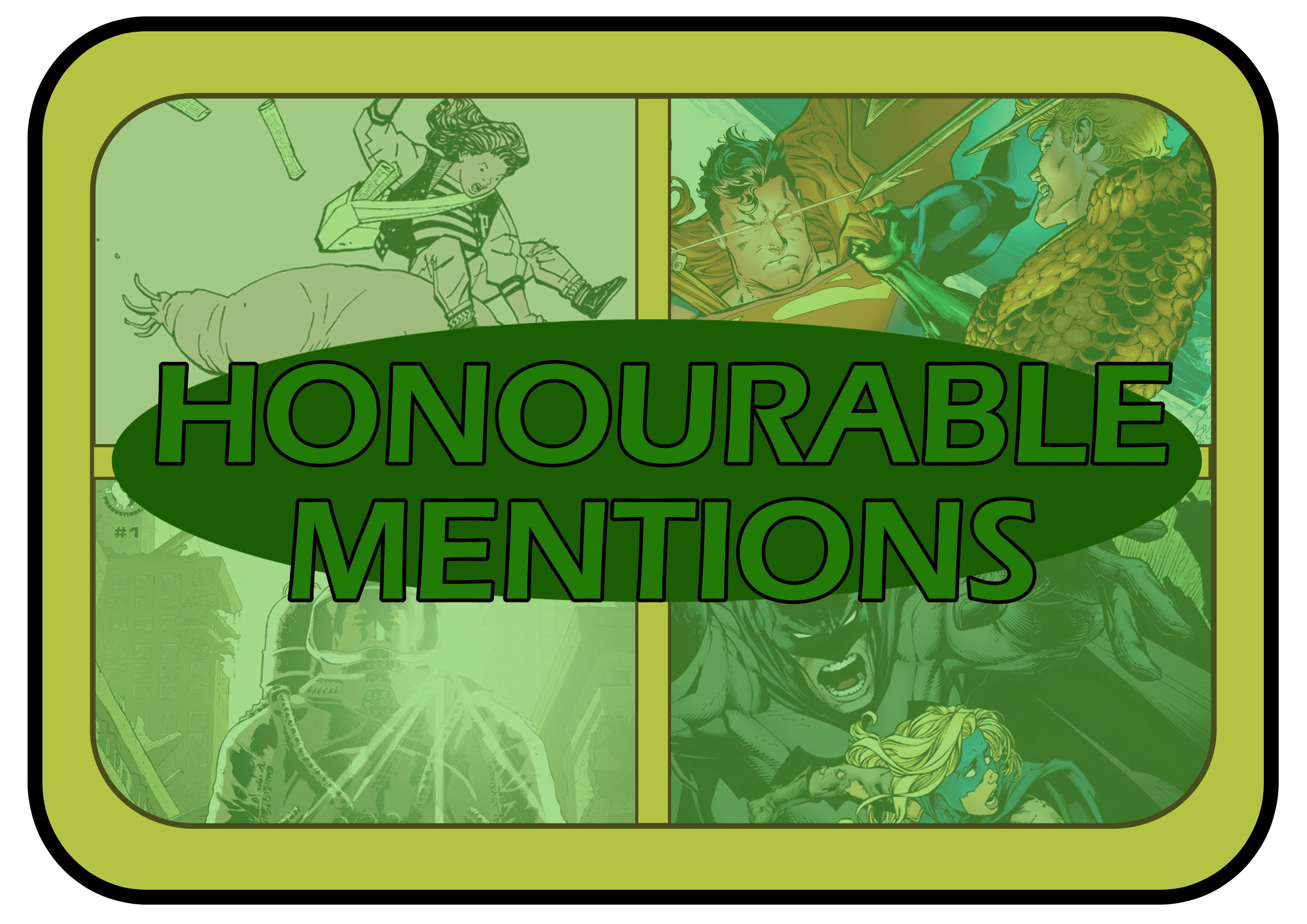 Of course for such an action packed month many more things came flying into stores. Chief amongst those was the final part of the ‘I Am Gotham’ storyline in Tom King’s Batman #6. The storyline never sat too well with me, not feeling 100% like a Batman story. However, with this latest issue King has kicked new life into my interest in the series with a heart-felt and quite emotional send off to his first story arc. With some well executed, if predictable art and a refreshingly raw look at the effects of grief; I’m looking forward to seeing what comes next.

Also dropping this week is Aquaman #6 from Dan Abnett. Usually I’m all about the King of the Sea and his wacky capers but this week he just wasn’t up to his normal standard with just a little too much time spent dick-waving with Superman. That said, I loved the ending, and the promise of some Atlantean political machinations has me rubbing my hands in anticipation.

In the weirder section of the shop, Paper Girls #9 has shimmied in from wherever it spawns from and is still as delightfully weird as it always is. Almost too much so. A great deal many answers are teased and tingled this month and more questions are raised. The story is still galloping along at a good pace, and each issue the titular paper girls become stronger characters. There is however, a real risk of the whole story collapsing under its own weirdness. Unlike Moon Knight which embraces ambiguity as one of its tenants, our protagonists in Paper Girls want answers; and so do we.

New, fresh and launching this month is Eclipse from Zack Kaplan and Image Comics, a sci-fi dystopia set in a world where the sun is a deadly threat. A good new series with a lot of thought behind the art and a compelling sci-fi murder mystery. Just a little too serious and dark for my tastes, but no doubt the perfect cup of tea for someone else.