New Comic Book Day was only a few days ago, that means it’s time to check out some of the highlights from the last few weeks. The very cool, very strange, Bounty from Dark Horse kicked off these past few weeks and a few DC Rebirth titles have really caught our eye too. 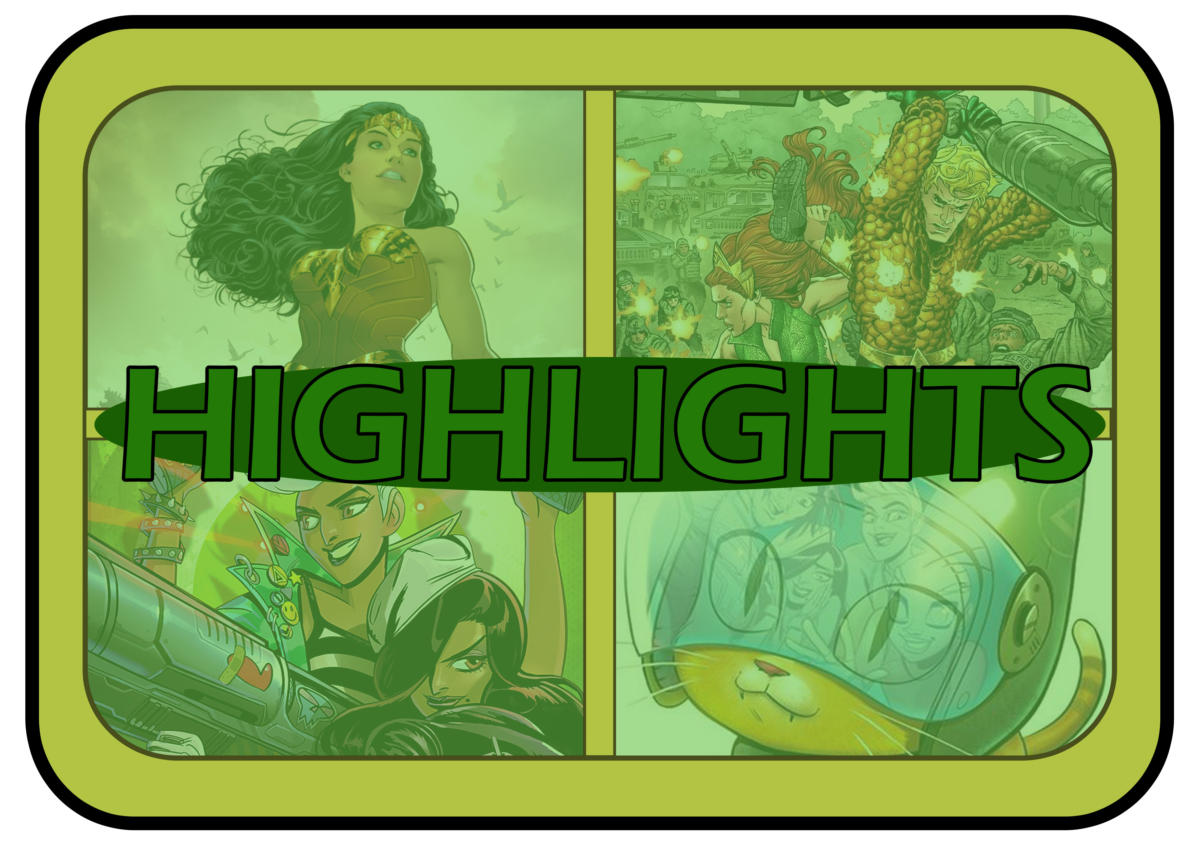 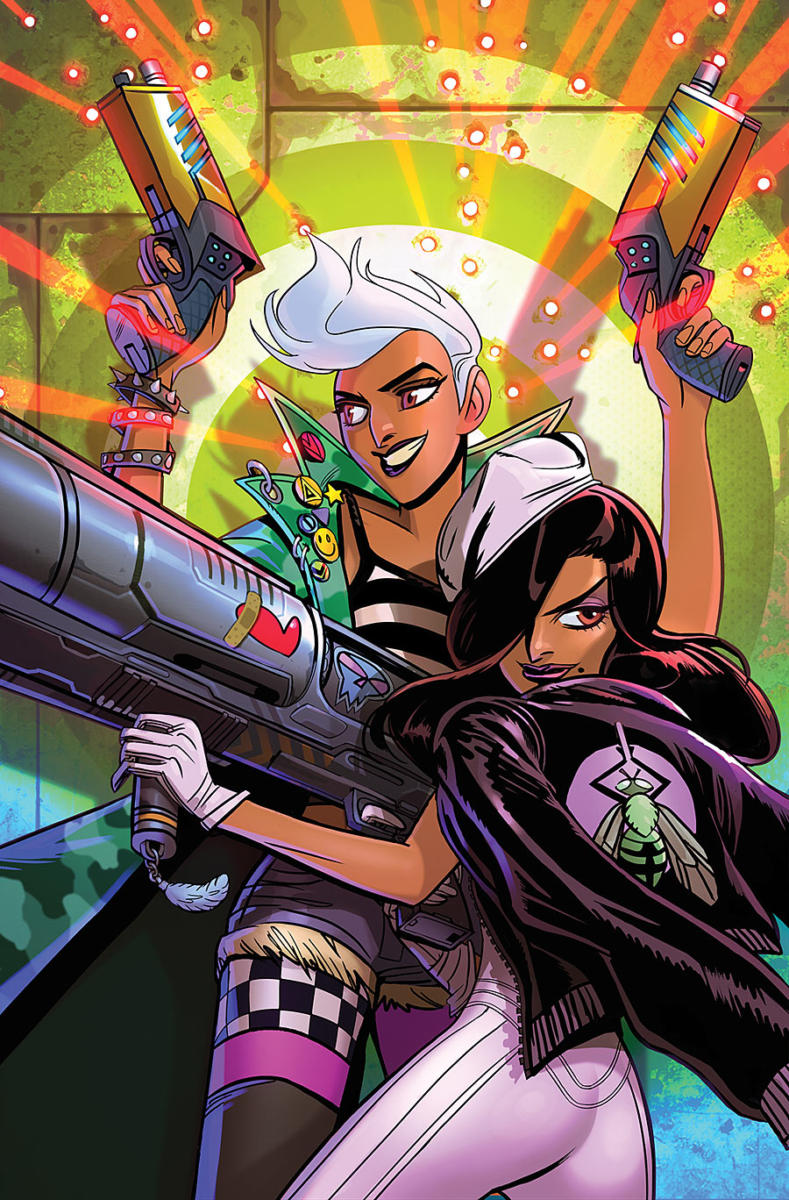 Bounty is the kind of comic I wasn’t actually aware I needed in my life until now. Results were always going to be pretty good considering that Kurtis Wiebe is behind the phenomenal Rat Queens, a fantasy/comedy adventure with an all-female lead ensemble. So now we’re here with Bounty, the next logical step. A sci-fi/comedy adventure with an almost all-female lead ensemble. It tells the story of Nina and Georgie, two very tough anti-corporate bounty hunters forced to go on the run and erase their own identities after a job gone sour. I’ve grabbed the first couple issues and I have to say, I’m pretty much hooked. It has a great, pulpy vibe and a real twisted sci-fi quality to it. Wiebe, much like in Rat Queens, isn’t afraid to embrace the tropes of his chosen genre. There’s exo-suits, space-ships, drones, lasers, and even futuristic gangs with one too many cybernetic implants. 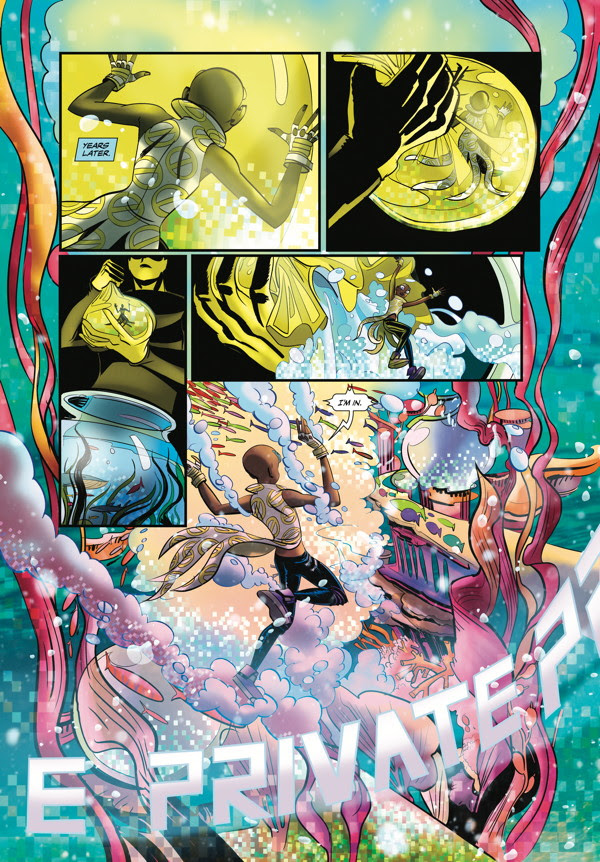 Just a brief taste of the action.

It’s excellent, action packed stuff and the characters are all truly excellent. Rat Queens was full of strong, well-written female characters and Bounty is no different. Readers hoping for something similar, but different, to Rat Queens will be in luck. My only real gripe is that across these two issues, there is a real effort on Wiebe’s part to develop our heroes’ backstories and still keep the main story chugging along and I can’t help but think that he just doesn’t have enough pages to really do what he wants. If you’re in the market for a rollicking, sci-fi adventure set in a very interesting world with a distinct Saga-esque flavour, Bounty may be just the ticket. 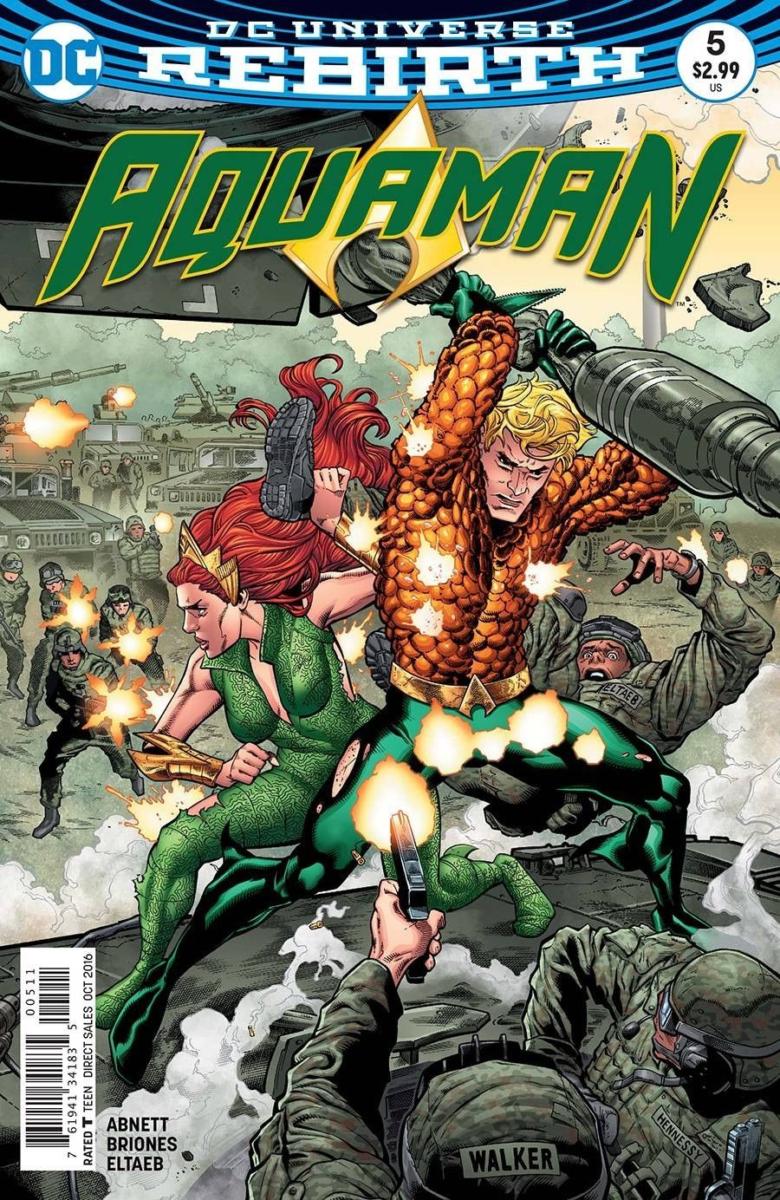 I’ve made no real secret of my love for Aquaman since it came out, boring every comics reader I know to tears with exclamations about how good it is. But guys, it seriously is. The Drowning is a truly, truly excellent Aquaman story and every single issue has been top stuff. This one is no exception. After Mera’s questionable actions last issue, they find themselves on the run. While the issue does essentially play out like one big action scene/chase and it does (I will admit) drag slightly in places, it’s still incredibly excellent. I not only like, but actively admire Abnett’s interpretation of Aquaman. He’s principled almost to a fault and the worse things get for him, the more I want to see him succeed.

In this issue we’re treated to Aquaman as a peerless warrior, but one that still is fully aware of the consequences of his actions and I seriously love it. I want to keep reading just so I can finally see him win. My favorite part of this issue is Aquaman’s closest ally, Mera. Their relationship is just handled so well this issue. It would have been easy for Abnett to fall into endless bickering and sniping, but instead he treats the couple (the Aquamans?) like real people. Mera has made a mistake, but Aquaman is willing to forgive her and even understands why she did what she did; it’s refreshing to see a relationship in comic books handled so well and it’s almost a reason that I keep reading. With some big rumblings in the background and an intriguing vision of Atlantean society and politics, I highly recommend grabbing the back issues of this, or even placing your trade pre-order now. 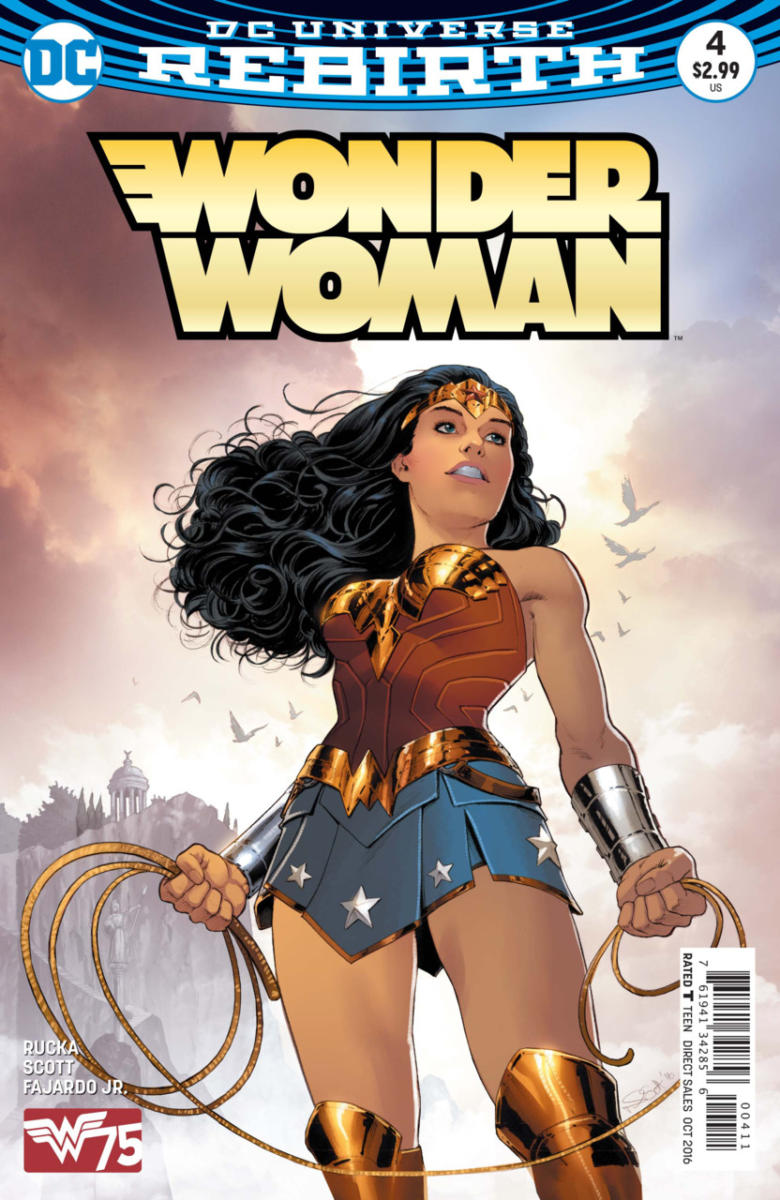 Let me just get this out of the way right now. I have not read a better comic in the last month. Perhaps the last 2 months. Wonder Woman #4 was just fantastic. I’m calling it now; Wonder Woman: Year One will, if Greg Rucka keeps it up, go down as one of the best Wonder Woman stories in the last 5 years. This issue opens just after Steve Trevor and Co have crashed on Themyscira and a hearty debate is held as to what is to be done about the sole survivor and the possible threat that Ares has returned. Rucka’s writing is just so smooth that even a council debate is a treat, its essentially exposition, but it’s very well done exposition. The story goes along at a fair pace and by the end a fair bit has happened, but it never feels rushed as Rucka spends just enough time in each piece to do them justice. The highlight of the issue is Diana and her mother’s relationship. There’s no deep trauma or extensive back-story to it, just a well written, well-drawn mother and daughter. And when Wonder Woman finally becomes Wonder Woman and takes the step to leave Themyscria, there’s some real emotion to it. 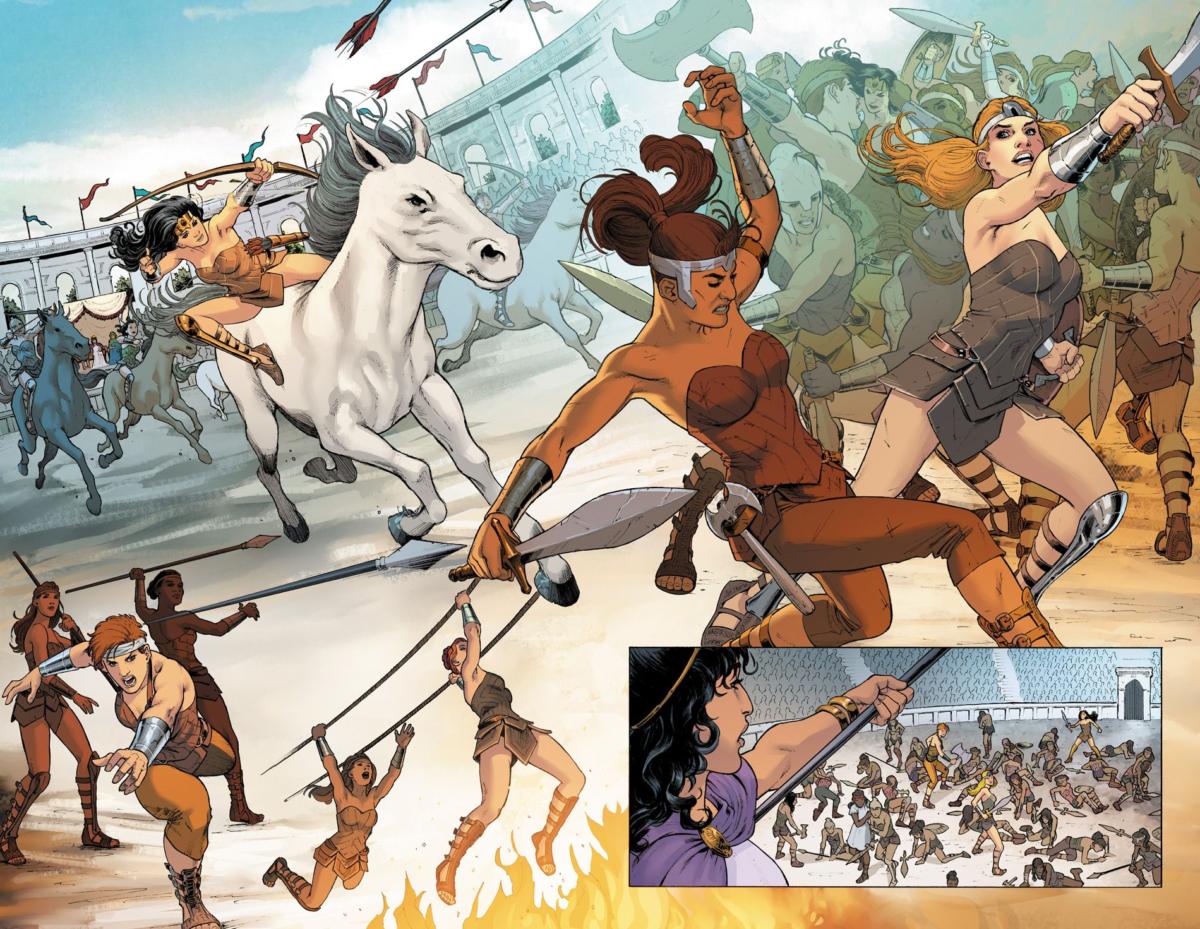 The entire issue is also fantastically drawn, colored and inked and for the first time in I don’t know how long I actually enjoy just having a read through for the pictures. With Rucka’s separate storylines only really just picking up steam now, you owe it to yourself to go and grab the back-issues of this and get on board with one of the year’s best comics. 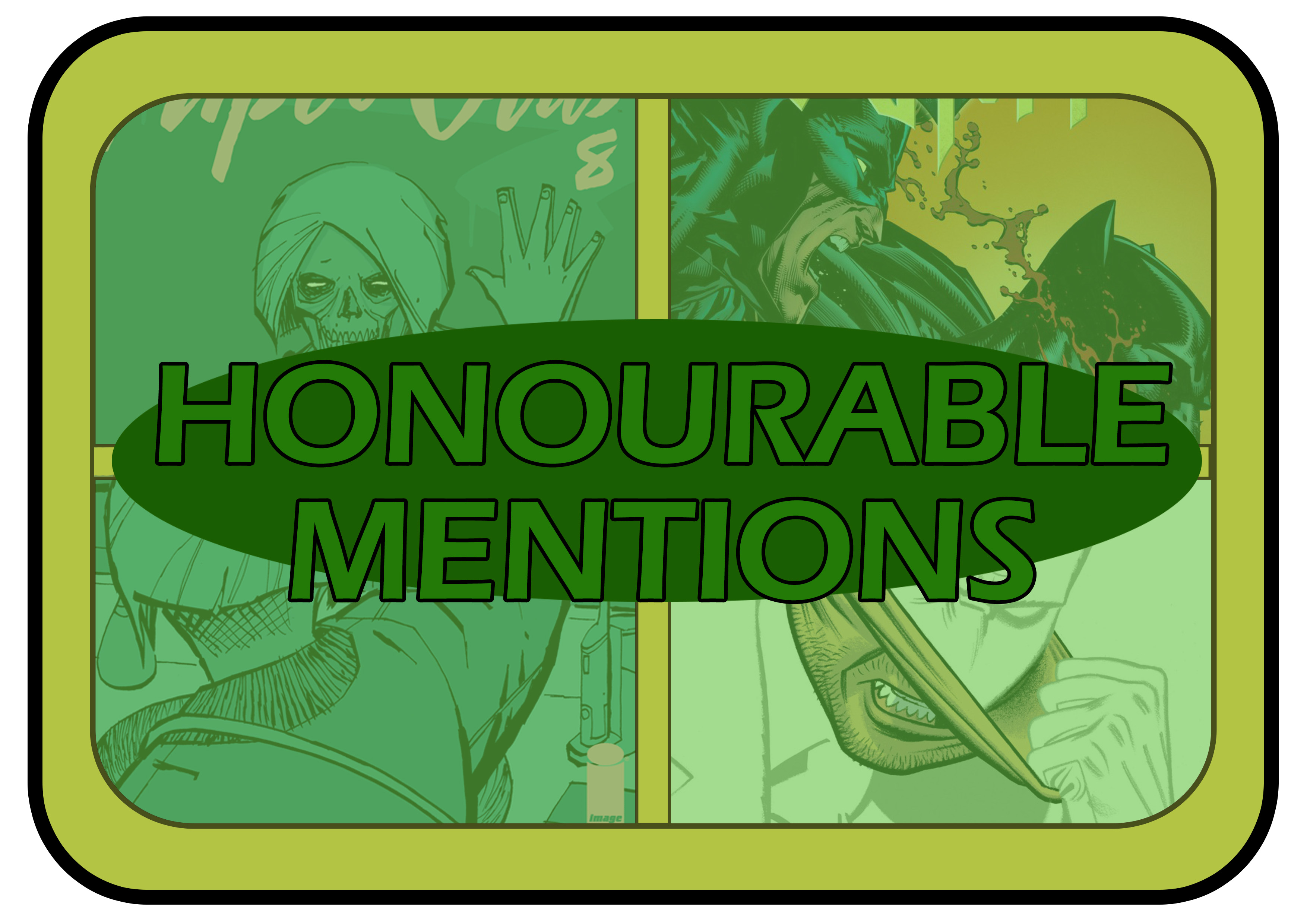 There was more out recently than just Aquman and Wonder Woman though (much to my disappointment, I feel that all titles should be replaced with just those ones) and perhaps chief among those is the latest in Tom King’s Batman, Batman #5. Tom King seems to finally wrapped up his Gotham and Gotham-Girl arc in a suitably dark, Batman style. While I’m not 100% keen on what he seems to have planned next with the Death of Batman (again) and it didn’t really feel like a Batman story, it was still a solid read and a good start to King’s run on such a big series.

Jeff Lemire’s Moon Knight has also wrapped up it’s first arc with Moon Knight #5. With such a trippy beginning, I was expecting something odd, and that was indeed what was delivered. More pyramids, more identity crises and a particularly cool sequence of changing artists make this a top issue and a great finish for the arc. It’s sadly let down by a weak last couple of pages that, considering the previous 4 issues, seems like a cop-out. But, I’m nevertheless still excited for the promised Moon Knight #6.

Speaking of weird, Paper Girls #8 from Saga writer Brian K. Vaughn has also warped onto shelves recently. A highly enjoyable sci-fi bag of weirdness, Paper Girls has yet to disappoint and this issue is no exception. Monsters, time-travel, ruminations on destiny and time and of course cryptic messages are all par for the course and this issue has those in spades. With a huge number of threads quickly coming to a head and head-scratching reaching incredible heights, Paper Girls #9 can’t come soon enough.