Happy Holidays to everyone around this beautiful Earth! For those of us who celebrate this wonderful gift-centric holiday, our bookshelves, gaming dens and entertainment centers are a little bit more bursting with joy. While socks and sweaters always make the perfect gift, we are here to delight in the all the geeky gifts we received*.

So, sound off in the comments below about the fun (or not so fun) bundles of joy you found under your tree, during the 8 light filled nights or whatever excuse your family used to buy your cousin Call of Duty. I will definitely use the gifts mentioned below to give me ideas on how to get rid of the pesky cash that all these grandmas gave me. 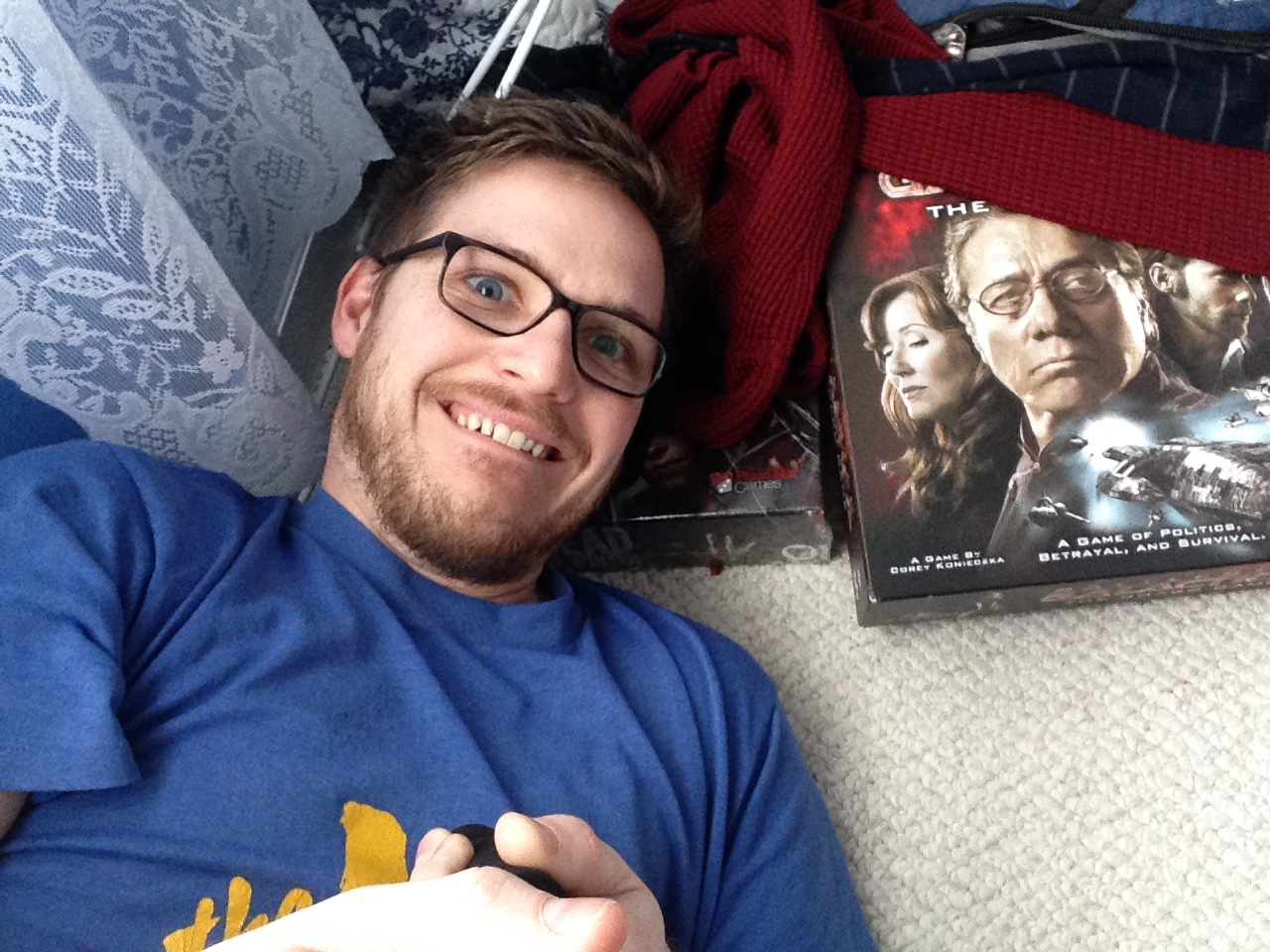 I got two radical board games: Dead of Winter: Crossroads and Battlestar Galactica the Board Game. One time during PAX East we saw an entire table of people playing the BSG game and realized that they were all cosplaying various characters from the show. I didn’t get a picture and it is the single biggest regret of my 28 years of life. I don’t think I have quite a strong enough jaw to pull off an Apollo but I will still do my d*rndest to defend the cardboard Galactica. I haven’t played BSG in several years but I was instantly hooked by the “who is the cylon? Oh g*sh the entire population is dead lol whoops” gameplay.  Plus, it is chock full of fun little plastic Cylon Raptors and Raiders to go against the Vipers. I don’t really remember how to play… but I think I can figure it all out pretty quickly.

Dead of Winter has been buzzing around my board game periphery for several months now. I don’t know why, but it really got in my d*ng craw. Eventually DoW was released somewhat widely and folks started playing the heavily thematic zombie survival game. Again, not too sure why I was intrigued by another zombie game. I had Last Night on Earth scratching my undead itch and Nick tried to teach Jennifer and I Zombicide, but it didn’t stick (we ran out of time on the last day of PAX East.)  Maybe it was the art or emphasis on creating a potentially tense story during your game. I still haven’t played but Nick and some folks I listen to in the podcast sphere said it is great. I looked like a real d*rk sitting on Jennifer’s brother’s bedroom floor opening up the cards and popping out the pretty cardboard punch outs while he played Call of Duty: Advance Warfare (which is h*lla fun, fyi). Also, there was a warning saying that some of the cards were “naughty” meaning they included tense adult situations which seemed interesting since one of the survivors is an actual former mall santa… Anyway, I am looking forward to our small scale New Years Eve Party to play Dead of Winter for the first time.

I also got a selfie stick.

And now a word from Jennifer… 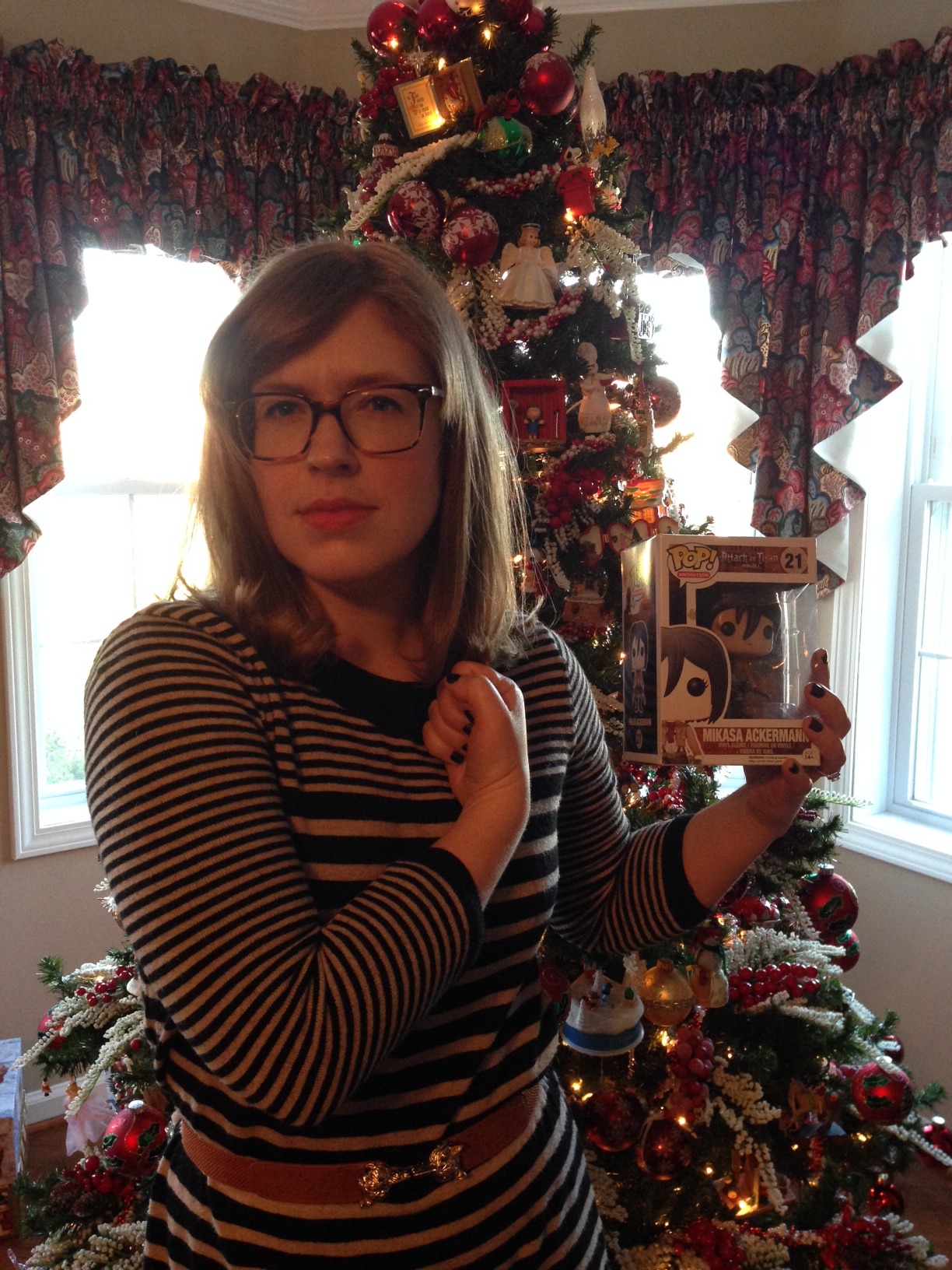 The majority of my gifts were not really of the geeky variety, but I did get a Mikasa Ackermann Pop! figurine from Tim, which I was very excited about. She will live on my desk with my Brienne of Tarth Pop! figurine, my Aludra mini, and C-3PO. I also got Mallory Ortberg’s Texts From Jane Eyre, which I have been eyeing lustfully ever since it came out in early November. If you’d like to know what text messages between Ron Weasley and Hermione Granger, Heathcliff and Cathy, or Katniss and Peeta might look like, you should definitely buy this book (spoiler alert- they’re hilarious).

I also got a lot of workout clothes and a gift certificate for personal training, so I hope to have Mikasa Ackermann abs by this time next year.

*The above links use GeeklyInc’s Amazon Affiliate link. If you bookmark it as “your” Amazon we will love you forever!