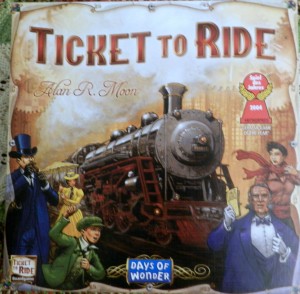 s introduced to Euro-style board games, the first game we played was Settlers of Catan.  It was eye-opening.  The step up from “classic” games like Monopoly and Risk was evident – here we had a game that stepped up the strategy element, while still retaining some dice rolling for variance and replay-ability.  I couldn’t wait to play again.

That being said, I consider Ticket to Ride my gateway game.  When I first played this it wasn’t just that I wanted to play again, I NEEDED to play again.  I needed to own this game immediately.  I bought it the next day.  It appeals to me on every level – the theme is simple (some think maybe too simple), and the game elements fit the theme.  The mechanics are easy to grasp and explain.  The game length is reasonable.  The basic strategy is apparent and gives an early Aha! moment for new players, but there are multiple ways to win.  It looks appealing and uses bright, easily identifiable colors (along with symbols to help color blind players).  I think the luck vs. strategy balance hits the sweet spot as well.

“Okay Mike, we get it, you’ve got strong feelings about Ticket to Ride.  Get over it.”

Well, it’s my article and I already have your click.  So buckle up, there’s more to come.

Ticket to Ride is set in turn of the century and is played on a map of North America.  Major cities dot the map stretching from Los Angeles to Vancouver to Boston to Miami, and are separated  by colored segments meant to be filled by trains.  Segments range from one space (Nashville to Atlanta) to five spaces (Calgary to Winnipeg).  The colors correspond to train cards that are drawn into the hand on players turns, so you can only use red train cards to claim the segment from New Orleans to Miami, and only blue cards to claim Portland to Denver.   Grey segments can be claimed with any matching set. The longer the segment, the more points that are earned.  As an aside, the colored train cards each have a depiction of a different train car (caboose, freight car, etc.) as well as a unique symbol in the corner.  These two features make the game more friendly to colorblind players despite very heavily relying on colors in general. 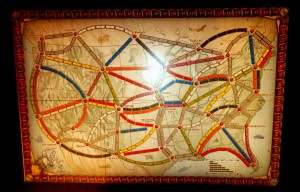 The overall goal is to build railroads connecting cities shown on destination cards using their 45 trains.  If at the end of the game the two cities on a destination card are connected by their trains, they will score points based on how far apart the cities are (in most cases this is the minimum number of trains required to get from one city to the other).  If the cities are not connected the player loses those points.  Players will have multiple destination cards, so the basic strategy is to try collect destination cards that use essentially the same route with only a small additional branch – Having Los Angeles to Chicago and also Los Angeles to New York is great because you can pick up 16 points for Los Angeles to Chicago and gain another 21 points for only two additional segments from Chicago to New York.

Player have three options on their turn – draw colored train cards, either from the five face up options or from the top of the deck, trade in a set to claim a segment on the map, or draw additional destination cards.  Some people telegraph their routes by laying down railroad as soon as they pick up the correct colors.  Others will try to collect all of the train cards needed for the entire route and then start laying track.  Learning which routes must be claimed early comes with experience – in and out of Las Vegas, Dallas to New Orleans, and Nashville to Atlanta are segments that can require a big detour if they’re needed and grabbed by another player.

At any time (typically once you’ve completed all of the destination cards in your hand, or can no longer do so with your remaining trains) you may take your turn to draw additional destination cards.  You draw a few and must keep only one, so odds are decent you’ll see a route that fits with what you already have on the board, at least early in the game.

When one player has two or less of their 45 trains remaining, everyone gets one more turn.  You can complete a vital segment if you need it, play as many trains as possible to score some points, or if you’re the gambling type try and draw a destination ticket you already have completed on the board.  Add (or subtract) points from your destination tickets to your score from playing trains through the game and total things up.  At this point everyone will ‘discuss’ what they were trying to do or how bad their starting tickets were, and more than likely you’ll start another game. 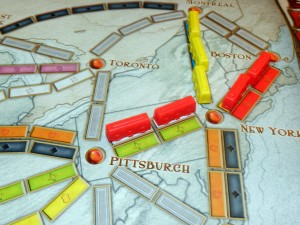 The box recommends eight and older, and I concur.  Eight is probably around the right age to have the right focus and long term strategy.  Younger kids may be able to be competitive if they have a set game plan that is consistent from game to game, but really if your seven year old always tries to go San Francisco to Washington along the same route you’ll probably make sure to block them early.  Or at least I would.

Capacity is three to five players.  I think ideal games are four players – with three players only one side of ‘double routes’ are allowed to be used, which makes blocking (and additions to the swear jar) more frequent.  With five players things get very crowded – there is nothing wrong with this as it just dictates a more conservative strategy, but four players allows the double routes and is a little bit more forgiving.   I recommend the game with three, four, or five.  The game runs between 30 and 60 minutes, depending on the number of players and if you’re introducing anyone new.

Included in the game are the map based game board.  State lines are drawn*, and major geographical features like the Rocky Mountains and the Great Lakes are clearly identifiable.  The map is greyed out aside from the colored routes, and is decorated with beautiful sketches throughout the board.  I love the board.  Our board has seen so much action we recently replaced it and we plan to use the old board in some kind of art project for our home.

*Note Canada is a not insignificant part of the game, with six Canadian cities on the map.  Despite this, provincial lines are not indicated, almost as of Canada is just one more state at the top of the map.  Left off for simplicity or part of America’s grand invasion plan?

There are 45 plastic trains of each colour (red, blue, green, yellow, and black), as well as three additional trains in case you have pets or toddlers who might ingest one while you’re looking the other way.  The trains are bright and fit nicely into the segments on the board (almost like they were designed that way).  The main purpose of the trains actually a psychological classification system separating players who arrange them in five neat rows of nine trains from those who keep them in one big pile.  Individual bags are included to store the trains when not in use. 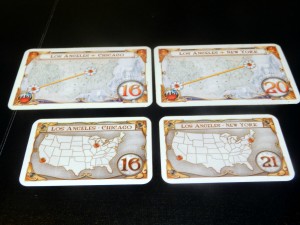 There are 110 train cards (11 of each of the eight colors as well as 12 wild ‘locomotive cards) which are full playing card sized.  The original out of the box destination cards are unfortunately not standard playing card size, measuring at about two thirds size.  Days of Wonder realized their mistake/revenue opportunity and produced the 1910 Expansion which I absolutely recommend. It provides full sized destination cards as well as 39 additional destination tickets which flesh out routes and provide additional replay-ability.  The cities are also easier to see on the card’s mini-map for those who are not geographically inclined.  It also includes an additional full sized set of colored train cards for when your toddler moves from plastic (age two) to paper (age three).

Ticket to Ride should be a staple of your board game collection.  Not everyone is ready to jump into heavy games like Agricola or Dead of Winter, so if you’ve got your casual friends coming over and want to break them in slowly, this is a great choice.  Ticket to Ride also stands up as a good time for more seasoned board game veterans and their less inclined spouses.  It really covers all the bases, so when it doubt, choo-choo-choose Ticket to Ride. You’ll be glad you did.

Buy Ticket To Ride on Amazon