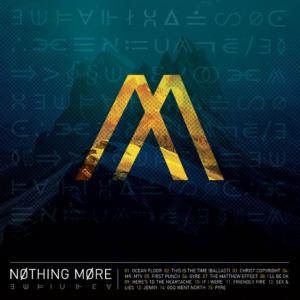 At long last, Geekly Grooves has returned! This time we’re coming to you with a recommendation from one of our own, @TheVikingBear_ on Twitter!

Nothing More is the self-titled album and major label debut from San Antonio rockers Nothing More. Released back in 2014, the album holds up as one of the more unique albums from a modern hard rock band. Lead by vocalist Jonny Hawkins, Nothing More set out to create music into which they’ve put their hearts and souls. The group met in high school and have worked tirelessly for the past decade to make an impact with their do-it-yourself attitude.

The album opens with the effect and echo filled “Ocean Floor” and leads into the album’s lead single “This Is The Time (Ballast)”. Thundering drums and bass riddle the track while Hawkins belts out, “You can’t see because you don’t know, You’re caught below, beneath your own shadow, Stuck inside, half alive, Do you ever stop to ask yourself why?” Next comes the drum busting “Christ Copyright”. While Hawkins is the lead singer, he started out as a drummer and it almost sounds as if he and the album’s actual drummer, Paul O’Brien, are having a full on drum battle throughout the song. At certain parts of the album the listener is treated to instrumentals with recordings of speeches by philosopher, Alan Watts, who was clearly a huge influence on the much album. The end of the album sees a big change with the song “Jenny” as it begins acoustically before building up into another wall of sound. The track was written about Hawkin’s sister who suffers from bipolar depression.

Personal Thoughts: I’m not usually a huge fan of this certain genre of music. I see its appeal but music similar to Nothing More’s has been continuously churned out for a good number of years. The band has its unique points and I feel like they definitely are trying to take the genre in a new direction but not quite enough for them to sound too incredibly different from many of their Eleven Seven Music label mates like Papa Roach, Sixx:A.M., Escape the Fate, or Five Finger Death Punch. If you’re a fan of any of those groups or similar ones then Nothing More definitely deserves some of your time. Tracks that stood out to me include: “This Is The Time (Ballast)”, “Christ Copyright”, “The Matthew Effect”, “Jenny”, and “God Went North”.

Thanks for checking out the latest Geekly Grooves. Please send any album recommendations via Twitter with #GeeklyGrooves or post them in the comments!