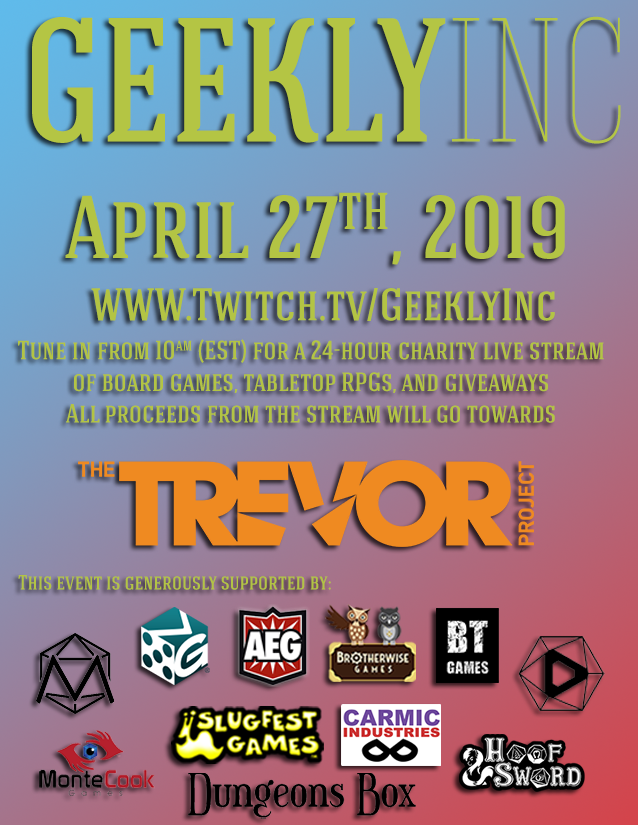 Join us over at the GeeklyInc Twitch channel on Saturday April 27th starting at 10am (EST) for our annual 24-hour charity stream.

We have the hosts of some of your favorite GeeklyInc podcasts appearing throughout the day to play games as well as special guests from the NeoScum podcast, S House Studio podcast network, JB Little from Drop The Die, and Christopher Badell from Greater than Games. You don’t want to miss it!

We have received some amazing donations from game companies to give away. Support The Trevor Project with a donation and you will have a chance to win some great games. Additionally, come and watch the stream and enter the chat raffles for a chance to win even more prizes that will be announced during the stream. That is at least two ways to win while supporting an amazing cause!

Last year you all helped to raise $9,161 for The Alzeheimer’s Association, an incredible amount that we hope to beat this year and if anyone can do it, it’s the amazing GeeklyInc community.

April 27th (all times are est)