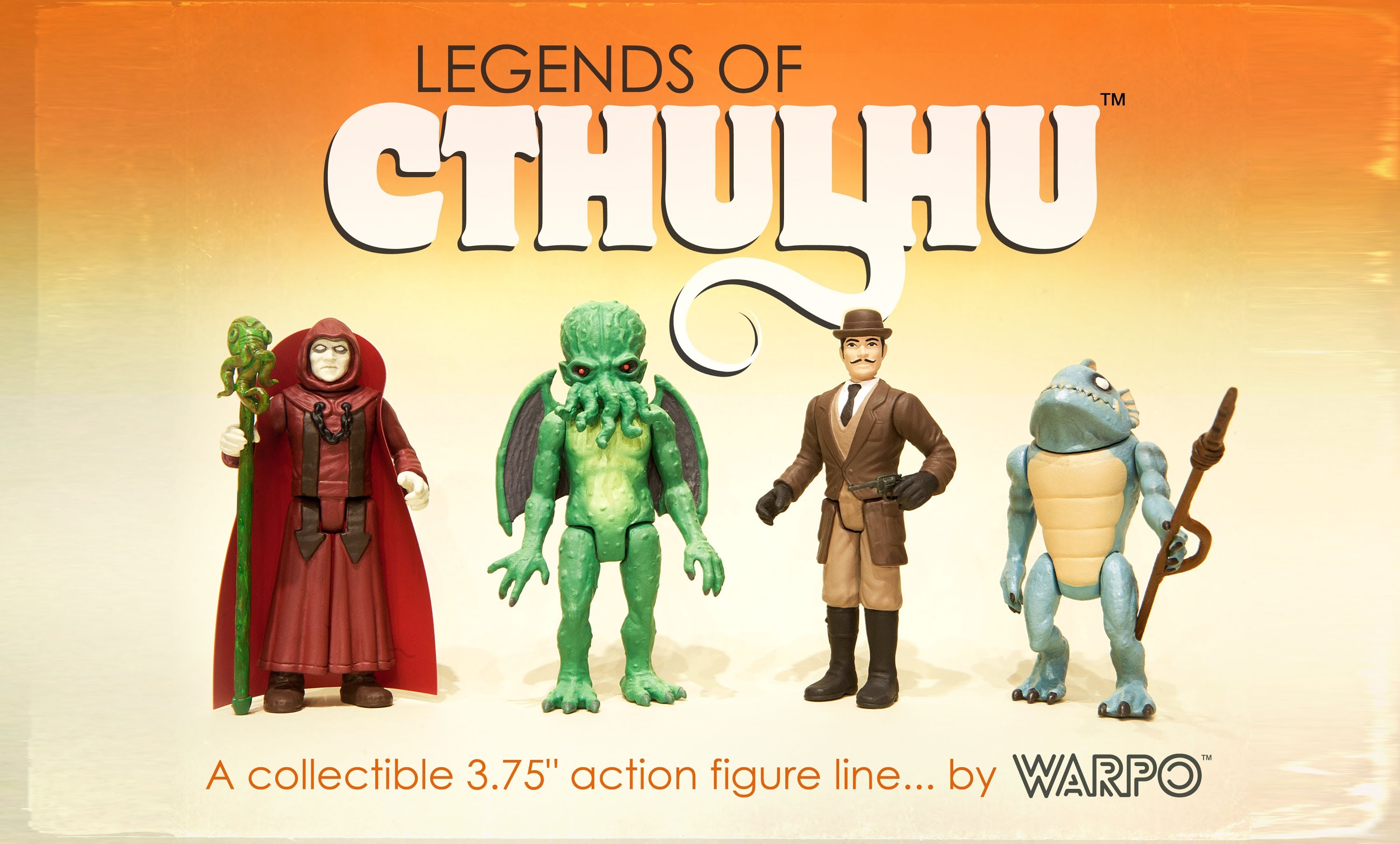 At GenCon 2015, Brad Brockway and I had a wonderful opportunity to talk with several different companies about projects that were recently released or coming soon. One of those companies was Warpo, a group that is focusing on making retro-styled action figures of your less-than-predictable characters. We spoke with Bryan Katzel, the President and Co-Owner of Warpo, about the new and upcoming plans for their Cthulhu line of figures.

Geekly Inc.:  Warpo is featuring the Legends of Cthulhu line at GenCon, can you tell us a little about the history of Warpo.

Bryan: Warpo formed as a company in early 2013, and did a Kickstarter earlier last year that was super successful. We ended up hitting our goal within 72 hours, and then got over 220% [of] what we were asking for. We knew that there were Cthulhu fans and H.P. Lovecraft fans out there, but you never know until you jump into it. The support that we got was really amazing, and that was the launch of the company and the launch of the product line, Legends of Cthulhu.  It’s an imaging of if a toy company from the 70’s or 80’s took H.P. Lovecraft’s work and blew it out with action figures and coloring books and all the the things that toy collectors would want. We’re nerdy toy collectors ourselves and have been in the toy industry for a long time, so we wanted to do something that raised the bar for retro collectables. We wanted to take a more artisanal approach as opposed to just slapping on the retro font and photoshop filters. We got sick of the same 80’s licenses getting remade and remade and thought “why can’t there be new stories being told for that era?” It’s like the 70’s-80’s ended too soon and there could be a lot more stories and more stories; let’s just roleplay it out and pretend to be a toy company then.

GI: So now someone is going to be able go and pick out their Han Solo action figure but can also stop an say “Oh but I want Dagon or Cthulhu too.”

Bryan: Yeah, that’s been the biggest joy is sharing this people. One guy we got to talk to expressed to us the feeling of opening up his Cthulhu action figure and [how it was] like time traveling to back to being a kid and opening his Hammerhead figure. All the wrinkles on him and the stiffness of the joints, just trying to evoke that same nostalgia that we would enjoy. 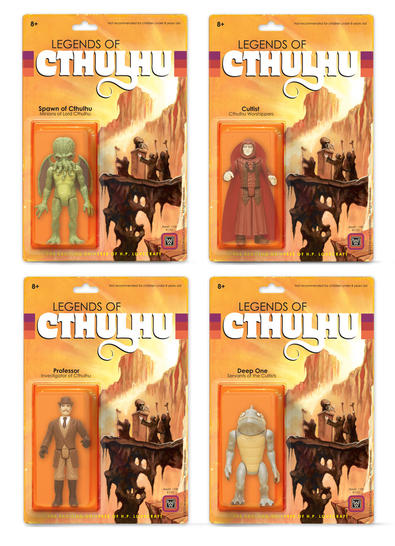 GI: As you were talking about the packaging, I looked at the Legends of Cthulhu line and couldn’t help but think about toys that I had as a kid. That affect and is really cool. You have a lot of the attention to detail that isn’t always around in toys now. Is that detail something that you guys saw and wanted to develop the line because of that lack of that kind of product?

Bryan:  For sure, for one we all come from the creative end and are designers or creative directors and it isn’t easy, but it’s easier than someone who is more versed in sales. I can spend all the time I wanted at home with my tools and get it perfect. Coming from that background we want to put all that attention to detail. But like you said, we didn’t’ feel that toy companies were putting in that much detail and there’s really no reason why they couldn’t. Paying attention to it and using those arrows as your style guide and showing some restraint to not throw in all this new stuff. When we worked with Eddy Mosqueda, he did all the sculpting, and he worked with Mattel in the 80’s on “Masters of the Universe”, “Teenage Mutant Ninja Turtles”,  and just a ton of really great stuff. Anyway while he is sculpting them, because the toy industry is burned into his brain, he kept trying to make all these advances to it to take it to the next level. We had to say, “Nah, we want to make it more simple and compete with the toys you were making in the 70’s and 80’s.” Trusting in that restraint and trusting in those things that have been successful, and that people are still collecting today and going towards that type of aesthetic is what is important with us. You mentioned the packaging and we worked with Ken Kelly, he is a painter and the nephew of Frazetta, and he worked under  Frazetta, worked on “Micronauts” and the “Advanced Dungeons and Dragons” toy line and did the covers for a bunch of Kiss albums. He was still painting oil on canvas, not digital, and making sure that the art techniques were following those from the 70’s and 80’s. Even if at the end of the day you could digitally create it,knowing that there are going to be those little errors or those little human touches that feel of the 70’s and 80’s when it was being done gives it that authentic feel. Ken painted up all the artwork for us and he was phenomenal, he’s got so much cred and he’s worked with so many people and he was just the nicest guy to work with. He would even tell us things about how he was painting the toys even before he saw a prototype and those were the type of things that we wanted to do. The packaging was important to us because that was your portal as a kid. Staring at the package that gave you all the material to go off and play.  So that was a great experience and doing that I think resonates with our fans.. 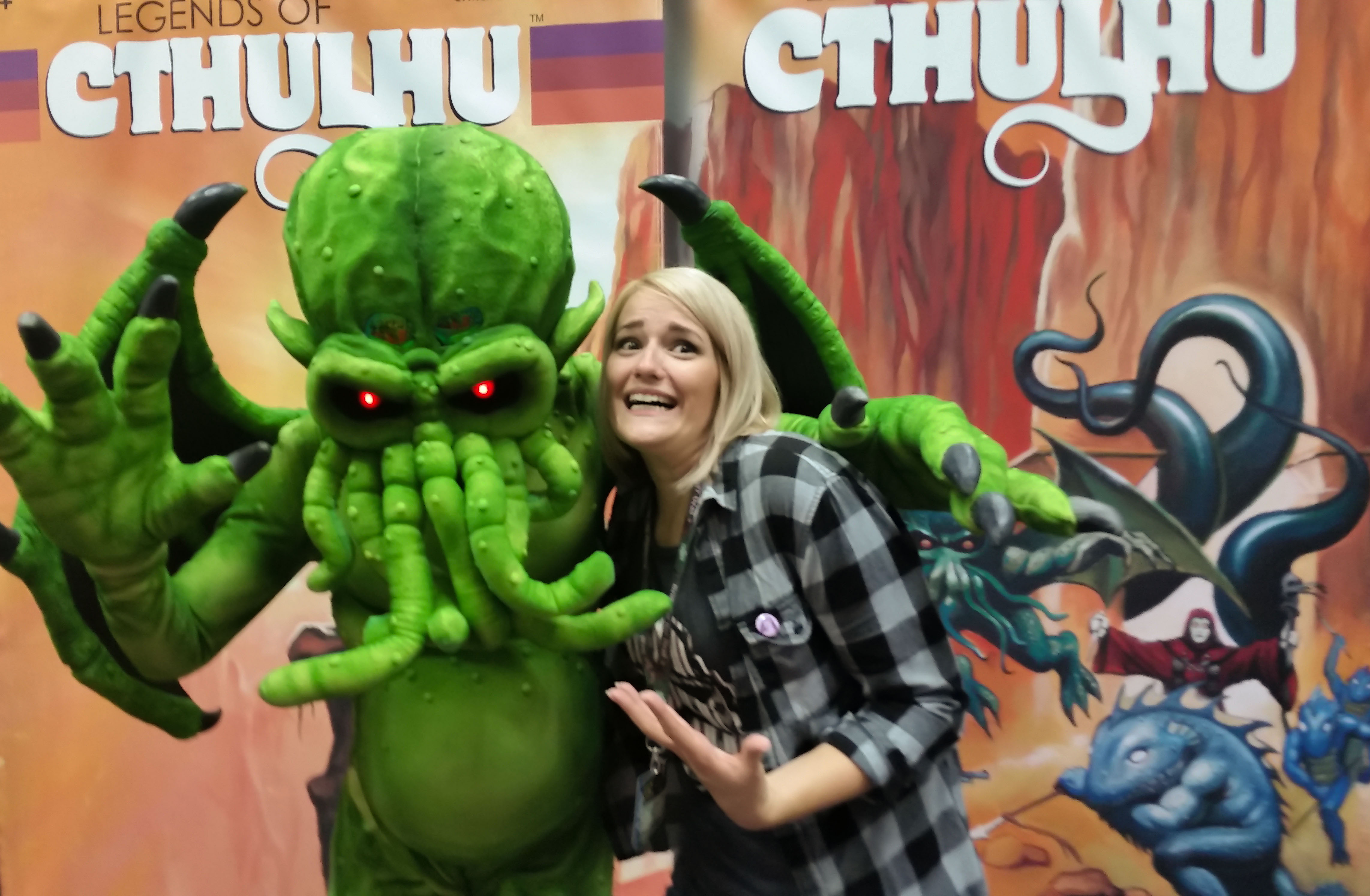 Nika never was the same after having hugged The Great Old One.

GI:  what do you guys have planned next? What is the end game for Warpo, do you guys want stick mainly with Cthulhu or to branch out and start exploring different lines?

Bryan:  Our philosophy is that we have always seen this as a platform for making toys. Through tons of different product categories, it doesn’t have to be just 70’s or 80’s action figures. We want to get into anywhere where there is this collective base and anything that we dork out on too. So that could be plush, that could be board games, that could be tons of things that we just supply the way we are trying to make it. We have two brand new properties that we are going to be doing a Kickstarter for in November, and one that should be announcing in 2016. We have also committed to doing a second wave of Legends of Cthulhu. Probably we will be going for a whole new environment, you know maybe this will be our Empire Strikes Back. Maybe some old characters will come back, but we really want to take our time with it. This is our “All-Star” cast and some of the other characters and other people in the mythology don’t necessarily work as well as action figures. They would probably work well as large scale models, but not as action figures. So we want to take out time and make sure we do the line justice since there has been such great support.

GI: Where can people get the line of Legends of Cthulhu and other Warpo figures?

Bryan:  They can go to warpo.com and some fine retailers in their area. They are also online at bigbadtoystore.com, but you can find it all through our website. We are also on Twitter and Facebook at WarpoToys.

Make sure to keep an eye out in November for Warpo’s new Kickstarter and in the meantime, head over to their website and pick up some Cthulhu action figures. Now you can really play out your favourite scenes from Cthulhu and Friends!