During GenCon, Brad Brockway and I had an amazing opportunity to interview several companies, some up-and-coming and some already juggernauts in the gaming industry. One of these interviews was with a person that I have been a fan of for many many years and I have to thank for providing the system which really hooked me into gaming. This interview was with Wes Schneider, Editor in Chief of Paizo, the company responsibility for my favourite system, Pathfinder. Wesley took time from his very busy schedule to meet up with us, indulge our questions, and tell us more about some of the new things that Paizo has out now. Since the interview was conducted in the exhibit hall with several thousand people around us, it has been transcribed below for your reading pleasure. This is the first part of a three part interview. 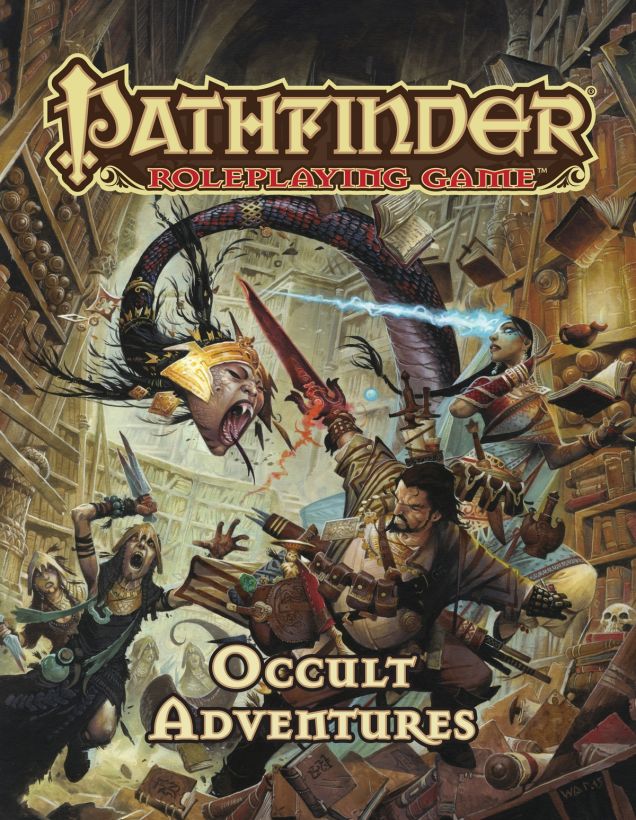 Geekly Inc.:  What has been the most fun project that you have been working on so far this year?

Wes:  Occult Adventures has been super cool because that’s been a very different sort of project for us. So much of what we do are “these are new classes”, “these are new characters/monsters”, but they are all very much in the world as sword, sorcery, fantasy. Any of the characters we have done either in our core rulebook or in recent expansions, as the Advanced Class Guide,  could very much be on an adventure with a “Gandalf” or a “Conan”. Occult Adventures ends up taking a direction that we don’t usually go with these characters that come from 1800s Spiritualism; about powers of the mind and spirits and seances. Which in a lot of our stories and our adventures, we really dig a lot of that. A lot of our stories are just as much horror as they are fantasy, so finally having a toolset to create these characters that are in that vein is super cool.

Geekly Inc.: Out of those, I know there are new classes, which is your personal favorite?

Wes: Probably the Spiritualist. Her schtick is that while most of the characters use the power of their minds and hypnotize you or conjure fire or other energies; her whole deal is that she conjures these spirits to fight for her or do her dirty work to be her shield or what have you. So even her iconic character is this 90 year old women who is a very frail character. But she is able to summon up the spirit of her dead husband to go fight for her and what not. Who in the story she may have had a hand in getting killed.

Geekly Inc.: I am a big fan of Pathfinder because of the customization of everything. For example if you want to play a Barbarian and a Bard, you guys have a class for that. With the new Occult Adventures how well does that mesh in with everything that you already have?

Wes:  Absolutely. So the last thing we want to do is create a book that says “here are these cool toys, but you can only play with them if you are in one of these boxes”. So as much as the new classes are a really big angle of it, and a ton of support for them. There is almost an equal amount that unlocks those abilities, those rules, those themes for the characters that already exists. Probably one of the most blatant options in there would be for the archetypes we have in the game, which are overlying options for a character. We have a Cavalier, which is very much a martial class, who is known for having a big mount, being a knightly guy. In this we have a Ghost Rider where instead of having a steed, well they have a steed still but it some type of spirit to ride on. So there is a great picture of someone who is riding on this ghost horse. But it is even the sort of deal that is beyond what your characters traditionally have access to. In the tradition of fantasy RPGs psychic stuff and sionics have been this weird appendage that you just add on to the game. What we wanted to make sure we did with this was make it Pathfinder and make it the game you already know. The whole system for it is treated the same way as the magic for our clerics or our sorcerers already use so you don’t need to learn a whole new system.

Geekly Inc.:  Yesterday we did an interview with Syrinscape who Paizo has recently teamed up with. Where does the synergy happen for the collaborated work? Is it something where you go to them and say “We have the new Occult Adventures coming out, let’s make up a soundboard”?

Wes:  Ben Loomis over at Syrinscape is super talented and is a huge Pathfinder player and just knows his stuff with these soundboards. He and I were just on a panel at Paizocon because he did all of that and I really like using music and sound effects for gaming. We were talking about that and it was really my first time I got to sit down and talk to him about how that all works. It just largely started off with being “I sure do like Pathfinder and look I can do all of this” and just started from there. In the beginning on our side it was very much “oh that’s neat” and then he started putting together everything and made the Syrinscape program and it just kept getting cooler and cooler. Then he approached us and asked if they could do stuff for the adventure packs and it has gotten to the point where his stuff is so cool and he has been working with us and become a bud of ours for a while now. That when we have new adventures packs or he has the time or ready for a new project, what we can do is say “Okay tell us what you are ready for, tell us what you want to do”. What he ends up doing is once we agree on either a theme or, what we have been a lot of recently, are sound sets for specific adventures from the adventure packs. So for example Rise of the Runelords is our first adventure pack and best known. The first set is Goblins all the way down, just a thousand years of Goblins and what he has done has created sounds that go great for different parts of that campaign. So you’re in a market and there’s market stall sounds and what is neat about it is that there are sliders to adjust all of it. In all honesty, and he might hate me for saying this, when I first saw it, I thought “okay you’re going to have some market sounds and I am going to hit repeat at the end of the track and there is going to be the one point where you hear the barman say ‘hey!’ and you will end up hearing that a thousand times” and that just ruins the suspension. But that is not at all the way it works; so with the sliders you can tone it down or push it up and never hear the same thing.

Geekly Inc.: I think we were in the same boat. When we had first got the email we thought “ehh?” But It was definitely one of those things where as soon we saw it, we knew it was really really cool.  Music and sound effect are something you can find the online, but it repeats so much that you can’t be assured of the quality of it at all.

Wes:  What is neat about it too is that he is making it for RPGs. I mean it’s so often when you find “sounds for a haunted house, sure is spooky for kids”.

Geekly Inc.:  Right and  when you do its like the same door creaking that you hear in every movie or regular scary soundboard.

Part two of our interview with Wes will be dropping soon but until then, you can get the newest edition to the Pathfinder world, Occult Adventures, online or in your local game store now.