“It’s like Romeo and Juliet meets Mad Max meets X-Men with a little bit of Blade Runner cheering from the sidelines.”

With a tagline like that, there was no way I wasn’t going to pick up Lifel1k3, even though the leetspeak title made me wince. But the problem with comparing yourself to an iconic work is that you implicitly set up a comparison alongside the conversation you’re trying to have with it. And when there are multiple works to which you compare yourself–rather than letting the audience do the comparing–you will inevitably fall short of expectations. Lifel1k3 is good, but there was just no way it could measure up to the books! comics! plays! movies! it was channeling. It’s much more than Mad Max and X-Men and Blade Runner. It’s also Asimov’s I, Robot and China Mieville’s The Scar and Pacific Rim and The Force Awakens and Anastasia. It’s even Paradise Lost, which is itself fanfic of the Bible. (Don’t tell my English profs I said that.) 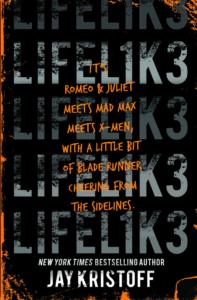 Most of those works are iconic. This book is not. It’s a pastiche. A good one, granted, but it cobbles together a bunch of ideas we’ve already seen, and calling attention to them only makes the seams show. Ironically, the book got a lot better when I realized this, because I stopped comparing it to each of the elements it was drawing upon, and instead started thinking of it like a Tarantino movie. It’s a deliberate, densely referential book that’s nevertheless doing its own thing. Mostly.

The beginning is a slightly predictable mashup of some genre themes. There’s a big robot battle, and some gang trouble, and some religious fanatics. The slang is a bit jarring at first, but it makes sense and by the second chapter I had started to like it. Jay Kristoff has a good ear, and a good sense for relationships too.

The middle chunk of the book is where it gets really good, veering away from what we know and into what Kristoff knows, which is fight scenes interspersed with some genuine human drama. He stops trying to write and gets down to telling a story, in other words. And it’s a story I like. Eve and her bestest (friend), Lemony Fresh, are on the run from some killer lifelikes, robots who mimic humans in appearance but are far deadlier. As Eve tries to figure out what they want and stay alive long enough to thwart them, Lemon debates letting go of a secret she’s carried for a long time. Lemony is definitely my favorite, a sly tough with a heart of gold.

The action is awesome and the plot developments are awesome, and they just keep getting better. Giant bioengineered krakens, wastelands of broken glass, mecha suits, secret identities and romantic entanglements…Lifel1k3 becomes a pulse-pounding thriller. Right up until the ending, when it all comes screeching to a head-scratching stop.

It’s not that the ending was upsetting. Actually, one of the upsetting parts was incredibly well done, tragic and full of irony, and I loved it even though it wrenched my heart. The rest, though, was a tiresome attempt to end on a dark, gritty note. It was rushed and not entirely in keeping with the characters’ personalities. It also raised the most philosophical questions thus far in the book, but ended before the characters could explore any of them. Maybe there will be a sequel to flesh out the sudden changes–Kristoff is prone to trilogies–but this felt like a proper (if disappointing) ending.

Generally speaking, the issues revolve around Asimov’s “Three Laws,” which Kristoff uses, verbatim, as the laws that govern robots in Lifel1k3 as well. But Kristoff also rightly offers a critique of those laws. They only work insofar as robots have no sentience, and humans have no empathy for them. When either of those two things happen, the laws become chains, and machines become slaves. Lifel1k3 partially explores this, and offers some interesting variations. The lifelikes are too emotional rather than emotionless, the standard assumption about robots, and struggle to process thoughts and feelings the way that humans do. It’s a compelling conundrum, and it resonates with current political issues surrounding the second-class status of anyone deemed Other. Unfortunately, the action and references overpower the message.

The ultimate deciding factor for a novel that has me on the fence is whether I’d pick up a sequel. For Lifel1k3 I absolutely would. The world is interesting, the characters developed some real depth, and I would like to see Kristoff redeem the ideas he didn’t quite pull off. The philosophical ramifications took a hard left turn, but he could definitely build a sequel around them. I hope he does.