Welcome back to Magic Gatherings!  Last week we finished up our short series on themes.  This week we’ll put some ideas from that series into practice as we look at my Selvala, Explorer Returned deck.  This is a deck I was excited about, but it didn’t work out.  I’ll talk about what was going on in the initial building process, as well as how I was able to reconfigure the deck.  All with the power of themes! 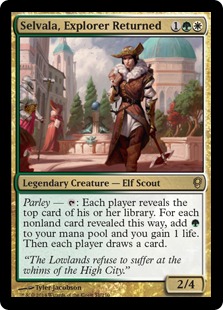 So what do we have going on with Selvala?  She’s an elf, for starters; that might open up a tribal theme.  We can also think about what will happen when we activate her parlay ability: roughly 60% of players will reveal a spell, which means we should expect two or three mana and two or three life, per turn (plus the extra card).  So we’re expecting to have a fair bit of mana, to be gaining life regularly, and to be drawing lots of cards.  That could point us toward ramp or lifegain, or maybe pillowfort.  Our opponents draw those cards too, so we could consider group hug as well.

What might help advance some of those themes, then?  Let’s take a peek through green and white cards that might fit. 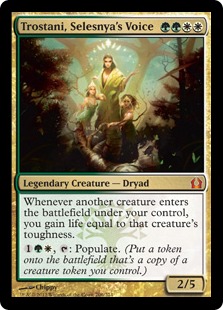 That’s an idea.  Trostani is on-color, gives us something to do with the extra mana, and supports the life-gain theme. 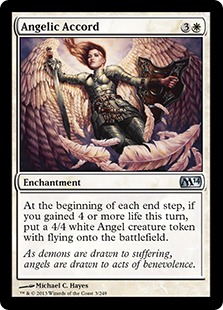 If we can gain a few more life beyond Selvala’s ability, this should trigger pretty regularly.  Trostani could populate the token. 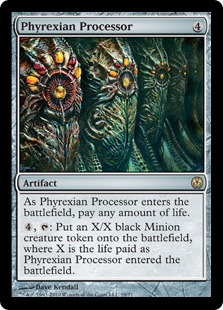 Now we’re talking.  This is a good use for lots of extra life.  If we ever get this into play alongside Trostani (the Processor makes tokens, which she is happy to populate), we’re in business. 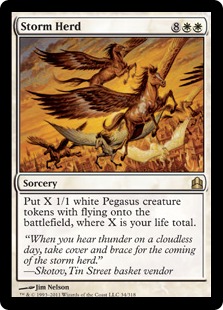 Hey-o!  I don’t actually own a Storm Herd, so it didn’t make the list, but if there ever were a deck for it, this would be the one.

So it looks like a token theme might make sense too.  Based on all this, I got an idea for a lifegain deck—a BIG lifegain deck—which also tried to make enormous tokens and populate them over and over.

How to build it, though?  Here’s where I turn to my Commander deck skeleton, which tells me what sorts of cards I’ll want and how many of each I’ll want.  I tend to think in these “chunks” when I approach a new deck:

Now, having laid out this blueprint, let me also offer a caveat: this is just a guideline.  Don’t feel bound by these suggestions.  You should always build the deck you want to build, which will be most fun for your group.  But, if deckbuilding isn’t really your thing, this is a good guideline to follow.

Here’s the first draft of the deck:

1 Patron of the Kitsune

1 Vigil for the Lost

1 Deploy to the Front

1 Grove of the Guardian

Let’s break that list into chunks to make it a little easier to see what’s going on.

There’s not much card draw—just the [mtg_card]Harmonize[/mtg_card]—but Selvala keeps the cards flowing with her parlay ability.

When you’re building a deck, always be on the lookout for cards that hit as many themes as possible.  Those are the cards that help your deck feel consistent, even as you draw a different mix of cards every game.

Also note that there are a few pricey cards in there—the [mtg_card]Wingmate Roc[/mtg_card], the Ajani—which I just happened to have lying around from building Standard decks.  When you’re building your own decks, don’t feel constrained by your budget; with few exceptions, almost no card is mission-critical for a Commander deck.

Similarly, some “staple” cards don’t appear in the list above—[mtg_card]Wrath of God[/mtg_card], for example.  All my copies were in other decks, so I just played Kirtar’s Wrath instead.  It’s the same principle: slot in something that you have on hand that seems fun, and enjoy your games.

Speaking of enjoying my games—this deck was a clunker.  Game after game staring at my hand, trying to parlay into something worthwhile, feeling like I was falling behind.  The parlay activations were great fun, but that was about the only bright spot.

After some thought, I identified a few patterns in the way the deck played out.  That led me to conclude I had made several mistakes in building the deck:

Put these things together and you have a play pattern that’s not really effective and not really fun: I would cast Selvala, and every subsequent turn of the game I would tap Selvala, get some mana, cast a creature, and pass the turn.  I was never able to set up the token-generating machinery I dreamed about, and every opponent could see every creature coming a mile off.

So what was there to do?  How could I salvage Selvala?

I decided to focus on what was fun when I played the deck.  I really enjoyed parlay—one of the few bright spots.  The other bright spot was Wolfcaller’s Howl.  It worked well with Selvala—my opponents’ hands were always stuffed—and every upkeep I got cute little wolves for free.

I realized that enchantments help me to break the “one turn, one creature/one card” pattern of play.  Enchantments are permanents too, but they tend to be harder to remove than creatures.  When they do stick around, they generate advantage every turn with little or no investment.  That gives me a way to “lock in” the extra mana for Selvala: I invest it in an enchantment, and every turn thereafter I get bonuses.

Plus, lots of enchantments have activated abilities, which give me an extra way to use Selvala mana on other people’s turns. There are also a few enchantments—Armadillo Cloak, Vow of Duty, Recumbent Bliss, Faith’s Fetters—which I’m interested in playing anyway, because they reinforce the lifegain theme.

So enchantments sound like the way to go!  Great.  How do we do it?

I left “enchantments” off the list of themes, so I haven’t written about them yet. This was perhaps an oversight, so let’s make up for it here.

As we’ve seen in our studies of themes, if you want to build around a mechanic or permanent type, you can.  Enchantments are no different.  As with other themes, we’ll look for cards that reward us for casting enchantments, cards that interact positively with enchantments, and the like.

For Selvala, we’re going to be especially interested in enchantments with activated abilities.  As I mentioned above, activated abilities give me profitable ways to spend Selvala mana at instant speed, which lets me save parlay activations for when it’s most politically savvy.  I can use them on end steps, or offer them to other players—“I’ll give you a card now, if you do me a favor later.” 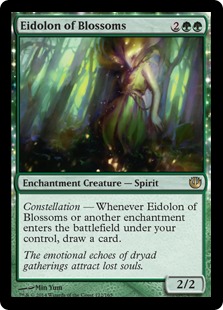 The constellation mechanic is a standout from last year’s spring set, Journey into Nyx, and Eidolon of Blossoms is the all-star for the mechanic.  That’s in. 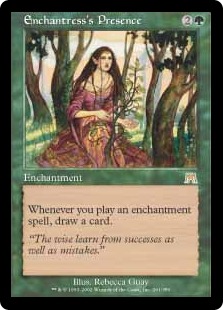 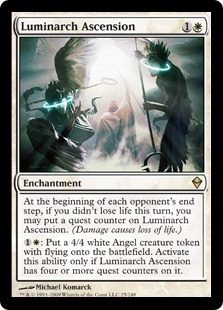 Trostani’s not leaving, so we’ll still have a small token theme.  This gives us something very good to do with extra mana. 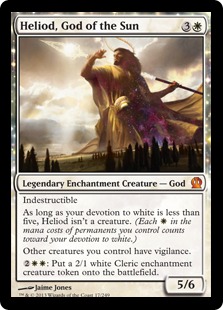 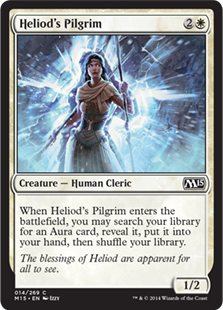 Like we mentioned, this can find a variety of good enchantments. 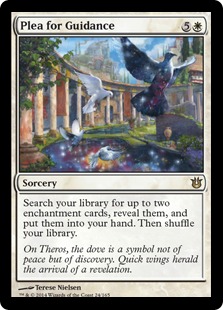 And here’s another.  Double the enchantments, double the fun! 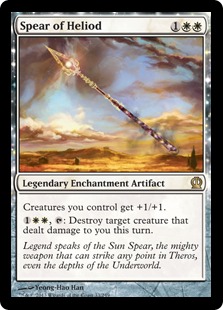 Another reasonable activated ability.  The “rattlesnake” aspect of this card combines with the group hug aspect of Selvala to encourage players to attack someone else. 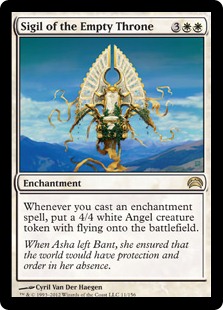 And speaking of getting paid….

All right.  We’re pulling some of the ineffective cards and replacing them with an enchantment package.  Fortunately, we’re building with themes!  That makes it much easier to pull out cards that aren’t working and replace them.

Out goes most of the token package, plus a few creatures that are better if we are making lots of creatures.  Planar Cleansing isn’t good when we want to play lots of enchantments.  [mtg_card]True Conviction[/mtg_card] could also have left—if it’s not your jam, feel free to try something else.

In goes the enchantment theme.  We’ll also add a few more lands: two Plains and one Forest.  [mtg_card]Freyalise’s Charm[/mtg_card] almost made the cut here—if you have a lot of black decks in your local group, maybe try that one out.

Which leaves us with:

1 Heliod, God of the Sun

1 Sigil of the Empty Throne

1 Grove of the Guardian

And the swap was simple: because we broke down the cards by theme, it was clear what should leave and what should stay.  Giving your deck a new dimension can be easy when you build with themes.

Over on ChannelFireball, streamer Gaby Spartz wrote an important article on how we can all work together to make the game’s culture more welcoming for women who want to play Magic.  If you are part of a larger Local Game Store or tournament scene, this is great advice.