Welcome back to Magic Gatherings! It was only a little over a month ago that we were talking Modern Masters 2015 Edition. Sorry for my long hiatus! I was getting married, you see.

It’s hard to believe, but Magic’s next expansion is already fast approaching: Magic Origins. To celebrate, I’ve got two articles. In this one, we’ll talk about the set themes and mechanics—what it’s trying to accomplish and how it does that. In the other, I break down the set for limited play, so that you can get a leg up at your prerelease this weekend.

Magic Origins has a lot of cool ideas in play, and Wizards of the Coast has touted it as a major step forward in set design and story communication. So let’s get to it!

We’ve already talked about Magic Origins briefly, as it was part of the 2015 Magic panel at Pax East. Wizards revealed there that Origins would center around five planeswalkers, each represented by a dual-faced card that transforms from a legendary creature to a planeswalker: 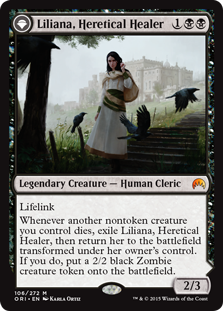 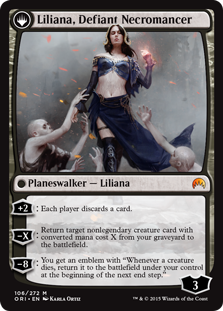 Magic Origins will explore these planeswalkers’ origin stories, many of which have only been hinted at. These planeswalkers are going to anchor the story arc over the next several sets, so Origins gives us a chance to see where they’ve come from, the better to appreciate where they go and what they do next. In addition to Liliana, we’ll get Gideon Jura, Jace Beleren, Chandra Nalaar, and Nissa Revane.

Each of these planeswalker cards is a fun little self-contained story, and, in fact, their card mechanics play directly into the planeswalker’s origin lore. Liliana here dabbled into necromancy trying to save her brother’s life, and wound up cursing him through her own hubris. On the card, her planeswalker spark ignites when another creature (a Human Brother?) dies. She takes a little ethereal jaunt and comes back as a more-powerful planeswalker, now fully embracing her talent for the dark arts. (Exiling the card also very elegantly solves a few fiddly game rule issues that are not otherwise apparent.) It’s a huge flavor win, and it shows how early in the process the creative teams and design teams are working together.

To that end, Magic Origins is meant to kick off a new era in storytelling for Magic. Moving forward, Wizards has promised a tighter union between set themes, set mechanics, story elements depicted on cards and in flavor text, and story elements detailed in other media, especially on DailyMTG.com and in Magic’s Duels of the Planeswalkers digital game.

This represents a new take on one of Magic’s oldest problems. As Magic designer Mark Rosewater and creative team member Doug Beyer are fond of pointing out, the card game medium frustrates attempts to tell linear stories. Stories rely on a progression of rising action leading up to a climax, and the sequence is important for satisfying development. Cards, on the other hand, fall out of booster packs at random.

Magic has tried putting a story directly onto its cards before—in the Weatherlight Saga, an epic story about the crew of a plane-shifting ship staving off the apocalypse, which spanned almost five years’ worth of card sets. Card art featured the major characters and attempted to show some story bit, while the main plot was advanced through pulpy novels. The net result was confusing—not everyone knew about or cared to read the books, but the cards didn’t communicate enough key information about the story or characters. So even though you could piece together narratives from card sequences like these: 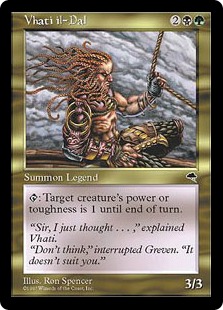 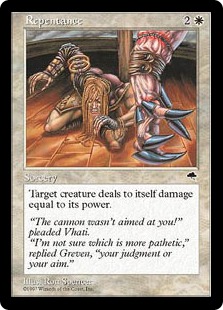 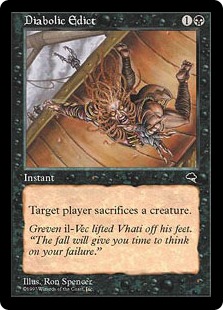 ….on the whole, the overall effect was jumbled. I liked the “scavenger hunt” feel of finding all the story beats, but I’ve always been an invested player. Moreover, this was before the internet, so people didn’t have ready access to all the cards. This particular sequence spans three different rarities, so even players who bought a lot of packs might not see every card, and certainly wouldn’t see every card at the same time.

More recently, Wizards has moved the bulk of the story to their Uncharted Realms column, on DailyMTG.com, which has helped bring some consistency to the stories. (As talented as the creative team is, it remains curious that Magic doesn’t have a full-time dedicated writer on staff—particularly given the high quality of their world-building and character development.) At the same time, Wizards has begun to put (most of the) critical story moments up front on dedicated cards: 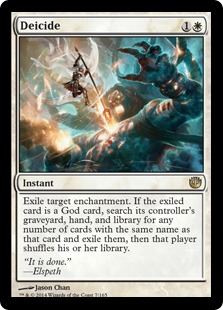 For Magic Origins, each planeswalker gets a card for the event which caused their spark to ignite. They’re not all tightly tied to the story mechanically, but it’s nice to have the moment represented. 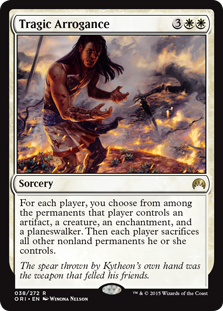 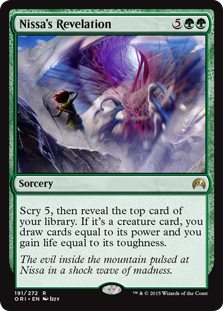 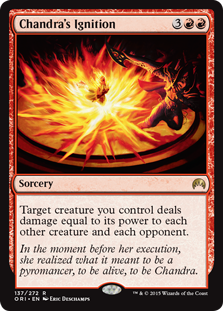 Other cards devote themselves to something Magic has always been very effective at—establishing distinct, compelling environments. Origins takes place across ten planes—one for each planeswalker’s home, and one for the first plane they planeswalked to. The cards that don’t recount the stories directly set tone and mood, and a number are pinned artistically to their respective planeswalkers. 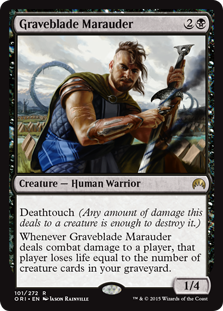 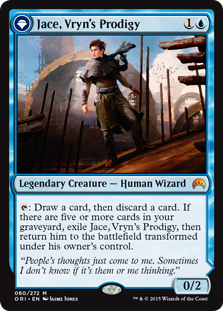 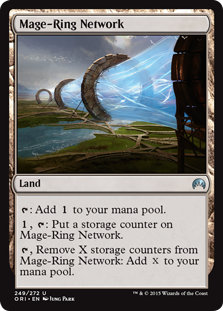 Magic Origins is also a first attempt to tie the story into the other thing that Magic is really good at doing—creating a variety of compelling play experiences. In Origins, we see themes of growth and maturity reflected through the set mechanics themselves.

The first mechanic, renown, makes your creatures a little bigger (and sometimes grants them an ability) when they deal damage to your opponent for the first time. 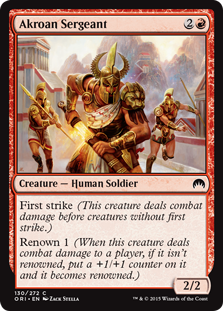 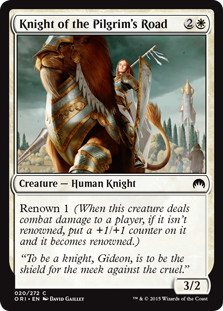 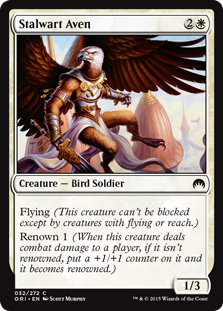 I really love this mechanic. It’s simple, in that it gives a clear goal with a clear reward, but it also packs a lot of interesting strategic and tactical decisions into achieving that goal. More to the point, it’s flavorful. Now your creatures aren’t just random dudes. They’re tiny heroes, and each one has a little quest to go on. Compare Rhox Maulers to something like Moss Kami: 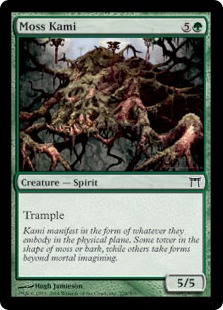 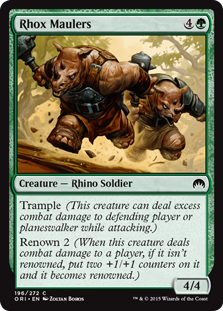 Now, I love Moss Kami, as I love Kamigawa. From a gameplay perspective, these are comparable cards. Moss Kami costs a little more, and gives you the average of what you can expect from Rhox Maulers without any extra work. But Rhox Maulers just feels so much cooler. They tell a story: they were stalwart warriors already, but then they had a glorious victory in battle. Now everyone knows who they are! And it makes them stronger. And as a player, you not only get the satisfaction of accomplishing what the card asks of you—you also get an emotional connection to your Maulers. You’ve been through a lot together. You made sure they got their hit in. You’ve grown together. That’s high praise for a simple mechanic.

The other mechanic is spell mastery, which gives a small bonus to spells you play, if you already have two or more instants and/or sorceries in the graveyard when you play them. These are designed to give the player themselves a sense of growth: as the game goes on, they gain experience, and their spells get better.

The design team took advantage of spell mastery as a chance to show the development of their marquee characters, too. So, each color gets at least one spell mastery card at each rarity, and each one shows a successive step in that planeswalker’s growth as a spellcaster. 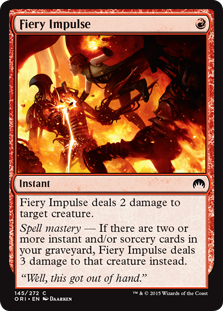 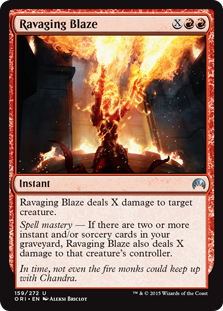 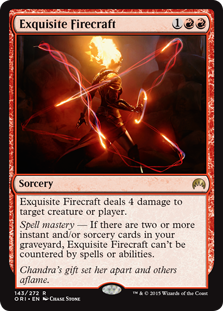 Aside from being a turning point in how Magic stories are told, and how those stories are tied to the mechanics and play of the game, Magic Origins is also the last-ever core set. Magic will be starting a new schedule for set rotations this fall, and while that’s an exciting change, it means that the days of simpler summer sets aimed especially at newer players are coming to an end.

What’s especially exciting is that many of these are interesting, open-ended cards that redux powerful, unusual effects the likes of which we haven’t seen in a while. They offer the possibility of entirely new deck archetypes—they’re powerful, if you can find the right deck to play them in.

As a longtime player, it’s also satisfying to have my commitment validated by getting the joke. More importantly, this isn’t the kind of reference that alienates people not in the know. Time Spiral block—three sets built around the nostalgia as a game-design conceit—is one of my favorites, but it has a rap for being inaccessible to newer players. Looking at something like Gustcloak Cavalier, you can see why: 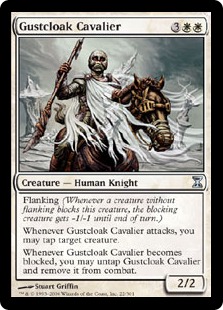 This is a clever card, if you get the joke. It’s a knight, so it has flanking—an ability from Mirage meant represent the tactical advantage from being mounted. Its second ability is a reference to Alaborn Cavalier (hence the “Cavalier” in its name), which could tap creatures when it attacked. The last ability is a reference to the Gustcloak creatures from Onslaught. The card is a pastiche of references, but taken as a whole, none of those add up to anything. It winks to players in the know, but to everyone else, it’s just a million things to keep track of. 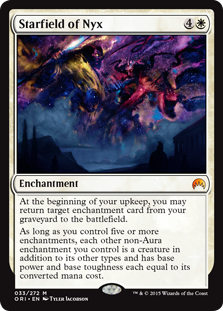 This is a satisfying card on its own merits. The nostalia is there too, of course. We’ve just come from Theros and we know that plane represented the domain of its gods—the night sky, Nyx—with enchantments and enchantment creatures. The second ability is a reference to [mtg_card]Opalescence[/mtg_card], and the first ability could be a nod to [mtg_card]Debtors’ Knell[/mtg_card], but you don’t need to know any of that to see that card as a satisfying whole. Everyone can enjoy this one.

Magic Origins looks like an exciting set—a nod toward the past and a look ahead at the future. It suggests new ways of linking mechanics and play experiences with Magic’s storylines, and gives players a chance to identify with the key players in those stories. It’s an ambitious set of goals, but it looks like Wizards did a great job with this one.

Be sure to check out my other article if you have a prerelease coming up this weekend! And let me know in the comments (or tweet @cutefuzzy_) with your thoughts on Magic Origins.