Last time I regaled you with stories of Tim Lanning’s and my struggles at the Magic Origins prerelease. By now, though, Origins has been street-legal for two full weeks. At the same time, players around the world have been drafting Magic Origins—it’s been very popular at my local store—so we’re getting a better sense of what the limited environment actually plays out like.

To top it all off, this past weekend was Pro Tour Magic Origins, where almost 400 of the best Magic players in the world gathered to play with the new cards. We got a chance to see Origins cards in new Standard decks, as well as see the best pros draft it.

This week we’ll have a bit of a grab bag: for the Standard-loving and tournament-minded among you, I’ll talk a bit about the Pro Tour’s results—the best decks, and how they innovated on what we’d previously seen of Magic Origins Standard. For everyone else, I have some thoughts on Magic Origins draft in the second half of the column. Commander fans, we’ll get to you all next week, I promise!

As is almost always the case, the Pro Tour showed off a lot of new decks, which will set the baseline for tournament metagames going forward. When you offer $40,000 to a bunch of great Magic players, they will produce a lot of interesting and innovative decks.

The breakout deck of the tournament was, without a deck, the blue-red artifact deck: 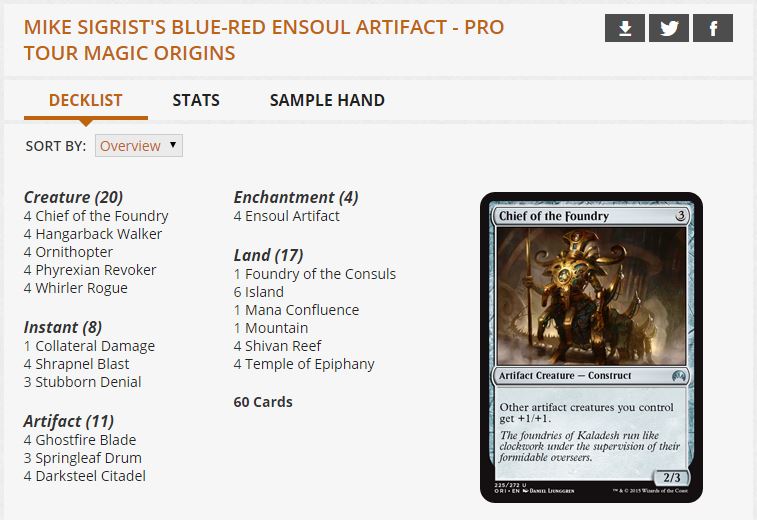 [Note: all decklists are scooped from Dailymtg.com’s coverage page. See that page for more information, particularly the sideboard cards. You can find lists of decks that had winning records here, here, and here.]

A number of pro teams fielded this deck or decks very similar to this. The core of this deck revolves around everyone’s favorite animated pair of scissors, [mtg_card]Ensoul Artifact[/mtg_card]. Paired with [mtg_card]Springleaf Drum[/mtg_card] or [mtg_card]Ghostfire Blade[/mtg_card], Ensoul means this deck can be attacking with a 5/5 as early as turn two. That puts the opponent under immediate pressure, especially since the deck also packs [mtg_card]Shrapnel Blast[/mtg_card] to deal the final five points. This deck can win on turn four, and it actually only takes a few cards to do it.

Those interactions have been around since Magic 2015 was printed last summer, and people have been trying to make it work for a while, with middling success. What changed is that Magic Origins brought a lot cards to play support roles. Most important is the biggest surprise card of the entire set, [mtg_card]Hangarback Walker[/mtg_card]. HW had already seen some success in Jeff Hoogland’s UW control deck at the Star City Games open in Chicago. I originally had Walker pegged as a limited bomb, but in practice it’s powerful and flexible: it blocks early (as a 1/1 for 2 that leaves another 1/1 behind), grows through the midgame, and can come down big if drawn late.

Origins also added some all-purpose Thopter support to the equation, particularly [mtg_card]Chief of the Foundry[/mtg_card] and [mtg_card]Whirler Rogue[/mtg_card]. The ability of the latter to give evasion to other creatures is very relevant when you are attacking with a 5/5. Chief makes the random Thopters into respectable threats. As a bonus, all these Thopters can pick up an Ensoul (which makes them stop being 1/1s and start being 5/5s), grab a [mtg_card]Ghostfire Blade[/mtg_card], or be sacrificed to [mtg_card]Shrapnel Blast[/mtg_card]. The end result is a deck that comes out fast and can close the game with a lot of evasive attackers.

As an aside, Stephen Berrios also made Top 8 with a similar build—his was more balanced between red and blue, so that he could play [mtg_card]Thopter Engineer[/mtg_card] and [mtg_card]Pia and Kiran Nalaar[/mtg_card]. That build misses out on Khans draft castoff [mtg_card]Tomb of the Spirit Dragon[/mtg_card], which actually looked very impressive in a series of videos by Gerry Thompson earlier this week.

Blue-Red Thopters fell just short of the championship, thanks in part to Mike Sigrist’s unfortunate mulligan to three in the deciding game of the match. Instead, epically-coiffed Swede Joel Larsson took the title with his mono-red deck: 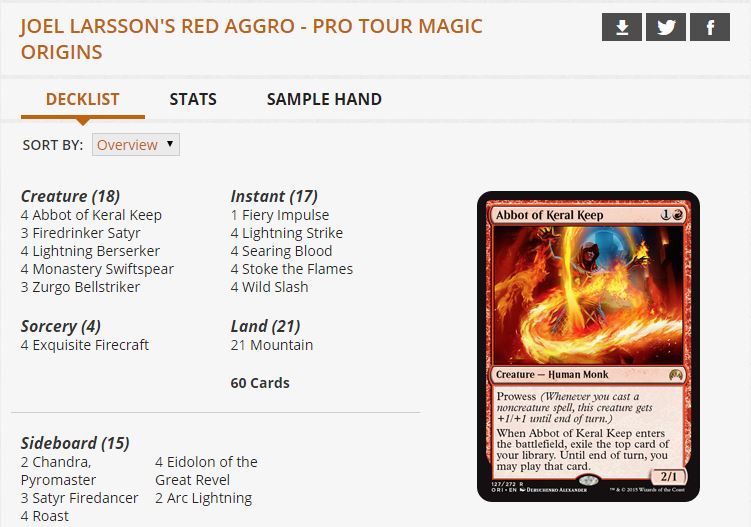 It’s interesting to note that neither of these decks are particularly expensive. [mtg_card]Hangarback Walker[/mtg_card] has spiked to around $17, but the rest of the Thopters deck will cost less than $100. Ditto for the mono-red, absent Abbot and Firecraft. Investing in playsets of those cards, if you are interested in those decks, is a fine decision.

The rest of the Top 8 saw some familiar faces: two Abzan Control decks and a red-green Devotion/Atarka Ramp deck. Abzan is the deck you already know: it plays the most powerful white, green, and black spells, usually overwhelming its opponents on raw card quality. Atarka Ramp is still a consensus pick for most powerful deck in the format, and in fact was the most played deck of the weekend.

Outside the Top 8, the bigger story was what didn’t do so well. In particular, blue-based control decks (both blue-black and Sultai) had a rough weekend. I would expect these decks had a rough time overcoming the power of the mono-red decks, which are so close to the ground that even cards like [mtg_card]Languish[/mtg_card] can’t stabilize against them.

Also absent from the best records were Abzan Rally decks like this one Ray Tautic used to win the SCG Open in Richmond last weekend. I think this is more a sign that people were aware of the strength of this deck and brought appropriate cards to counter it. Rally is also a slower deck, and its principal form of creature control, [mtg_card]Fleshbag Marauder[/mtg_card] (and living cousin [mtg_card]Merciless Executioner[/mtg_card]) is weak against random Thopter tokens. Very few players chose to play Heroic decks, but those who brought them did pretty well. I’ve seen other pros suggest that Heroic will be a good choice moving forward—it performed well at Star City Games tournaments leading into the Pro Tour, and because Heroic had a quiet weekend, most players will be strategizing against mono-red and Thopters.

There were also a number of interesting decks. Brian Kibler went 9-1 with this green-white “little kid” aggro deck—one that’s near and dear to my heart because it’s quite similar to what I’ve been playing in Standard for the last few months, and I’m relieved that I don’t have that much updating to do. Several players played white-green enchantment decks to solid finishes. Ken Yukihiro managed a 6-4 record with this sweet +1/+1 counter “tribal” deck. And lest you think that the only decks I care about are white-green, check out this neat blue-red mill deck, based around [mtg_card]Sphinx’s Tutelage[/mtg_card]. Or try this black-green-red Delve deck, which puts big creatures into play, then casts lopsided [mtg_card]Languish[/mtg_card]es for value.

What’s Next After the Pro Tour?

First and foremost, the biggest questions on everyone’s mind will be how to counter mono-red and Thopters. In both cases, I’d expect to see some more cards in sideboards that gain life; some players used [mtg_card]Feed the Clan[/mtg_card] to good effect at the Pro Tour, for example. Cards that effectively deal with [mtg_card]Hangarback Walker[/mtg_card] will be important as well—[mtg_card]Magma Spray[/mtg_card], for instance, or [mtg_card]Unravel the Aether[/mtg_card] and [mtg_card]Revoke Existence[/mtg_card]. The latter cards deal with Ensouled artifacts, which is sure to be a plus.

That said, what’s almost as interesting to me as the decks that did well at the tournament are the decks we haven’t seen pop up yet. In particular, I’m wondering where all the Elf and Goblin decks are. Magic Origins brought a number of powerful tribal cards that generated a lot of excitement during previews—cards like [mtg_card]Shaman of the Pack[/mtg_card] and Goblin [mtg_card]Piledriver[/mtg_card], which pointed toward fairly obvious decks that seemed powerful on their face. Rosario Maij went 8-2 with this Goblins deck, but aside from that the tribal decks have been relatively quiet.

This weekend will be Magic Origins Game Day at your friendly local gaming store. Game Day tournaments are Standard format—just like the Pro Tour—and are meant to be celebrations of the new set, as players update their decks with new cards. They tend to be fun and interesting tournaments where the competition is not too fierce, so I highly recommend them. Don’t worry if you can’t get or can’t afford all the hot new cards yet—lots of players will be in similar situations. Build the best deck you can and have fun!

List of the week: Five commons that haven’t played quite like I expected in Magic Origins limited

This is the internet, and as a sophisticated consumer of online media you have come to expect a list with every article. And who am I to disappoint?

Okay, okay. In all seriousness, I wanted to talk a little more about Magic Origins limited, and this seemed like a fun way to do it. Consider this a list of the top five “most surprising” cards so far, one for each color:

I’ve really been enjoying this format—the overall power level is very high and the games are briskly paced. Moreover, there’s an excellent tension between drafting a deck of powerful cards, weighed against drafting a synergistic deck that takes advantage of underappreciated commons. Neither strategy is strictly better, which is a hallmark of good formats. More than most formats, this Magic Origins is one that rewards you for having a good idea of what your deck will look like, even from the first few picks. So if you’re bored on your commute, say, you could do worse than daydream about a sweet draft deck—then keep that framework in mind the next time you sit down to bust some packs.

That’s all for this week! Good luck at Game Day this weekend—and be sure to let me know how you do in the comments or on Twitter!