Welcome back to Magic Gatherings! Last week we started a long-term project: examining themes you can use to build your Commander decks.  As we mentioned, themes help you wrap your mind around the deck itself, and choose the right cards for it.  They also help you explain what the decks do, and give the deck’s pilot some indication of how to play it.

This week we’re back and focusing on themes once again!  Also, don’t miss the bonus section on the bottom, where we’ll discuss some of this week’s previews for the upcoming Dragons of Tarkir set.

Let’s get right to it. 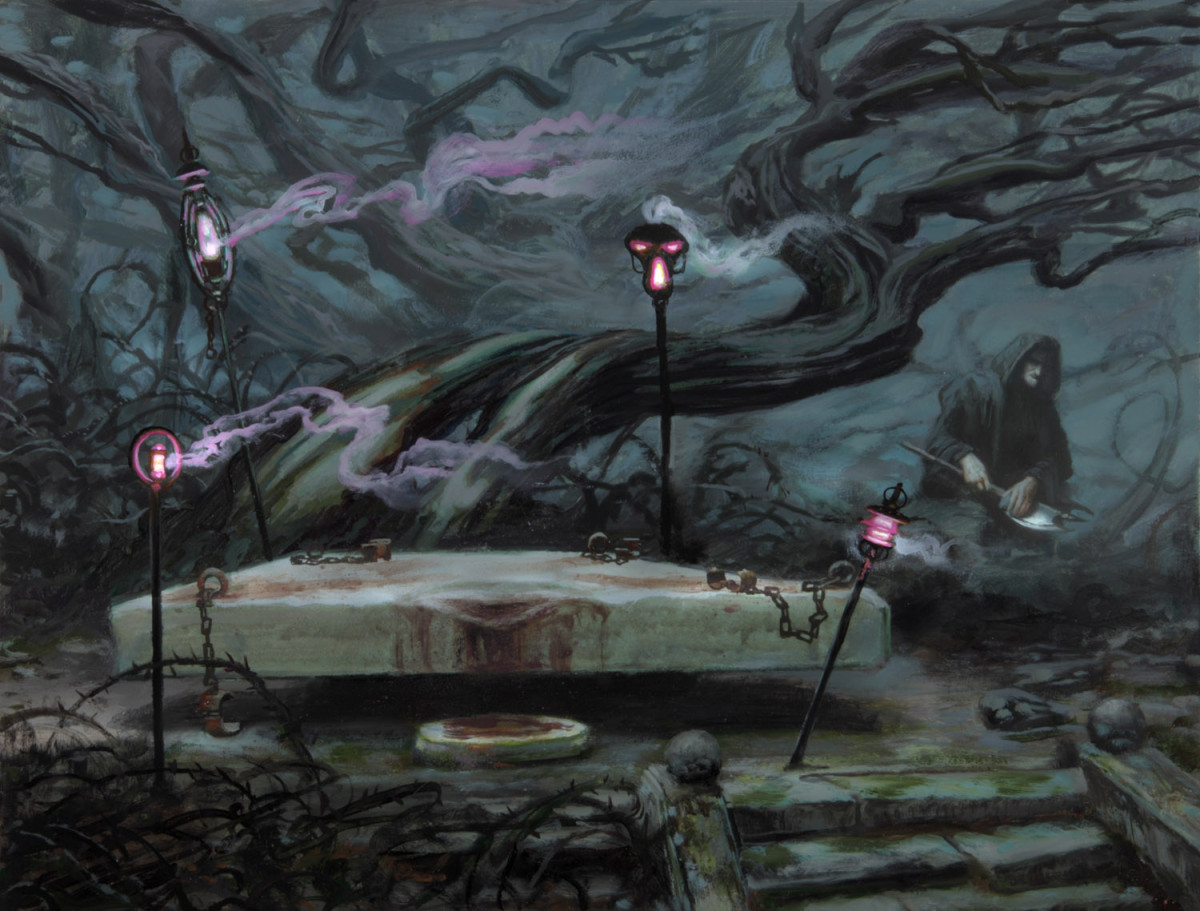 Power comes at a price, and sometimes the price is one of your loyal subjects.   Throughout the game’s history, there have been spells and creatures which demand a little more for their services, stretching all the way back to the iconic [mtg_card]Lord of the Pit[/mtg_card].  This is a mainstay of black, the most ruthless color, but it shows up everywhere.  Some of the best effects include cards like [mtg_card]Stronghold Assassin[/mtg_card] and [mtg_card]Ashnod’s Altar[/mtg_card].

And if you’re killing your own creatures a lot, you may as well take advantage of that too.  There are plenty of cards, like those which have Morbid, that care when your creatures die—[mtg_card]Deathreap Ritual[/mtg_card], for instance, or [mtg_card]Dark Prophecy[/mtg_card].  There are also cards that care about how many creatures in your graveyard, like [mtg_card]Bonehoard[/mtg_card].

Sometimes these death triggers and bonus effects become so powerful that you want to trigger them over and over.  When that happens, it’s important that your deck have enough “sacrifice outlets”—permanents that exist to give you the ability to sacrifice creatures when you want.  [mtg_card]Dimir House Guard[/mtg_card] is a personal favorite, but there are plenty that give you benefits, like [mtg_card]Goblin Bombardment[/mtg_card]. 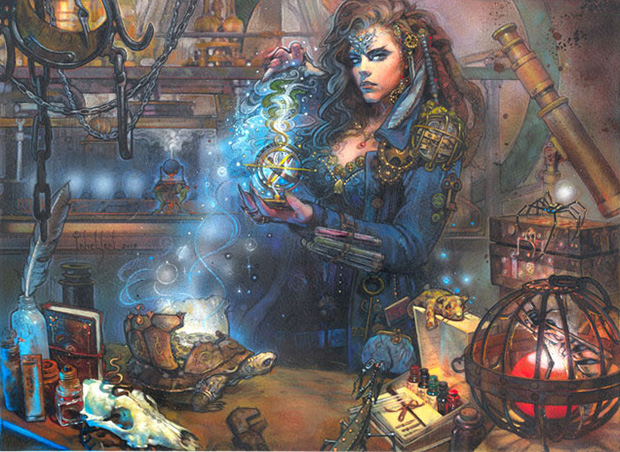 Like the creatures with enters-the-battlefield effects that were mentioned last week, artifacts show up in almost every Commander deck in some quantity.  Commander decks tend to require certain features, and sometimes artifacts are the best at meeting those needs.  Mana ramp (that is, getting access to more mana through lands and artifacts) and mana fixing (making sure you can make the correct colors of mana to cast your spells) are some of the most common: [mtg_card]Burnished Hart[/mtg_card] is a great example, but Tarkir’s Banners and Ravnica’s Cluestones also work.

Single-color decks often rely on artifacts to supplement effects that their particular color is weak in.  In this year’s preconstructed Commander decks, for example, the red and white decks use a lot of artifacts for card drawing—something red and white tend to be bad at.  Artifacts like [mtg_card]Unstable Obelisk[/mtg_card] or [mtg_card]Spine of Ish Sah[/mtg_card] can give you reliable ways to remove problematic permanents—you pay more for the effect, but if your color can’t destroy a particular permanent, you take what you can get.

Artifacts obviously synergize well with Equipment, since all Equipment are also artifacts.  In addition, several commanders point you in an artifact direction—Sydri, [mtg_card]Muzzio, Visionary Architect[/mtg_card], [mtg_card]Sharuum the Hegemon[/mtg_card].  Commander 2014’s “Built from Scratch” deck is a great place to start, and its marquee commander, [mtg_card]Daretti, Scrap Savant[/mtg_card], is a powerful leader to build around.

Cross-Synergies: Equipment, Ramp, Recursion, and supporting roles in most decks 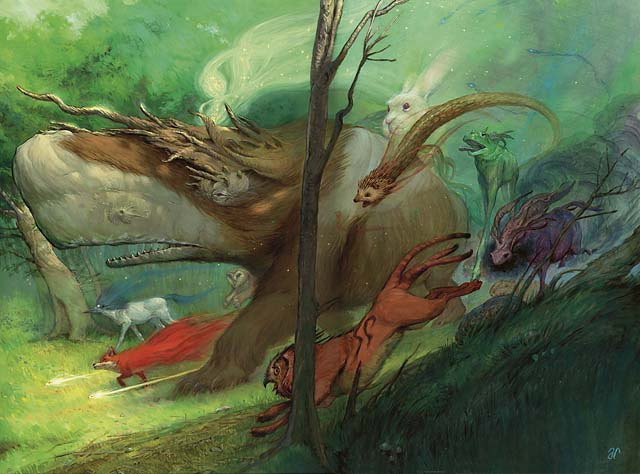 “Tribal” decks are built around a particular creature type—Elves, Soldiers, Zombies, Goblins, and so forth.  These decks have been popular ever since Magic’s first-ever set included [mtg_card]Goblin King[/mtg_card] and [mtg_card]Zombie Master[/mtg_card].  “Lords” like this are staple cards for tribal decks: find the ones that pump your creatures’ power and toughness, or add abilities to your creatures, and you’re good to go.

Beyond making creatures stronger, other tribal effects might give you a bonus or ability that scales based on the number of creatures in play, like [mtg_card]Wellwisher[/mtg_card] or [mtg_card]Graveborn Muse[/mtg_card].  They might make it easier to play those cards ([mtg_card]Daru Warchief[/mtg_card]), or have an ability that triggers whenever you play a card of that type ([mtg_card]Aether Charge[/mtg_card]), or whenever one dies ([mtg_card]Boggart Shenanigans[/mtg_card]).  There are lots of effects, which is part of what makes tribal so much fun.  Enter the creature type of your choice into a search engine (magiccards.info is a great one) and see what comes up.

I also need to mention the Tribal card type, a short-lived experiment from the Lorwyn block.  Basically, they’re things that aren’t creatures—enchantments, artifacts, instants and sorceries—which still have creature card types.  That sounds straightforward, but it turned out that it required a lot of clunky bookkeeping, as well as some rules baggage, so they don’t make new cards like this anymore.  There aren’t many Tribal card type cards, and none of them are crucial to having a good time, so don’t worry.

A different kind of tribal—one that takes the term a little more loosely—might try to build a deck around a particular keyword or mechanic.  I have an [mtg_card]Isperia the Inscrutable[/mtg_card] Commander deck, for example, in which almost every creature has flying.  Other good choices might be Vigilance or Haste.  Keywords and mechanics don’t get as many support cards as creature types do (if they get any at all), but they can be surprisingly powerful, and they take your deck in interesting directions.

Crossover themes: Tokens, Recursion, and others, depending on your favorite tribe 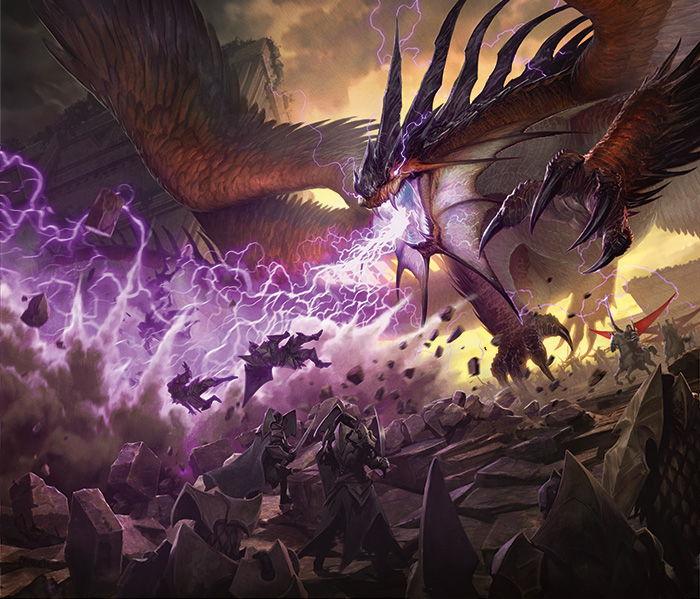 It was only a few weeks ago that we talked about budget cards from Fate Reforged, but the new set, Dragons of Tarkir, is already on its way.  Previews started this week at Wizards.com, and we’ve already seen some fun cards.  For example: 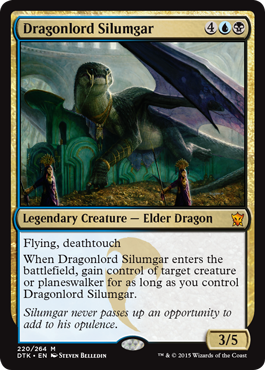 Silumgar has a powerful, splashy ability, one which could be really fun in multiplayer games.  He can’t protect himself, but with equipment to give him hexproof or shroud, he could be a headache for your opponents.  (Of course, as with all headache cards: take under advisement.)

Also badass is the fact that Silumgar appears to be wearing Tasigur’s mummified body as a necklace.  Wedding season is coming up, readers!  Make sure you show that special someone you really care, and give them the desiccated corpses of their former enemies. 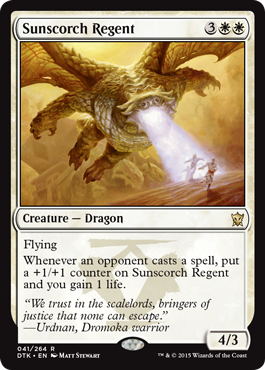 This is a very powerful ability, though sometimes tough to track.  By the time it’s your turn again, it’s not unreasonable to expect this to be an 8/7 or 9/8.  Even if the Regent dies, you probably gained a fair bit of life. 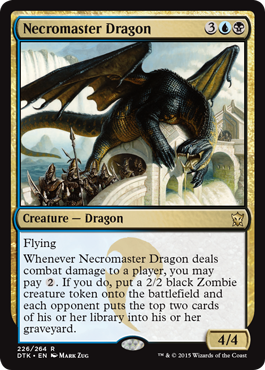 This guy gives steadily increasing advantage.  As we’ve already discussed, tokens are great for sacrificing, and Zombie is a relevant creature type. 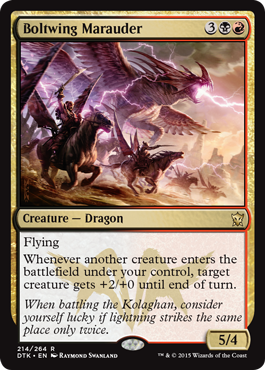 More fun with tokens.  If thinking about who should get the power buff gets hard, just have Boltwing take the bonus.  Drop a [mtg_card]Ponyback Brigade[/mtg_card], for example, and you can make this guy a 13/5 flyer.  You can give it to your opponents’ creatures, too, if you need to make friends. 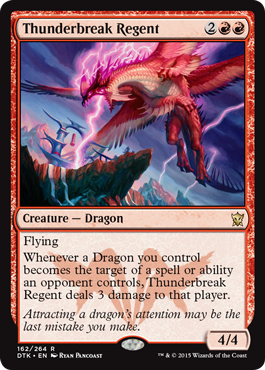 Fun with dragon tribal!  Cards that tell your opponents to mess with someone else are good. 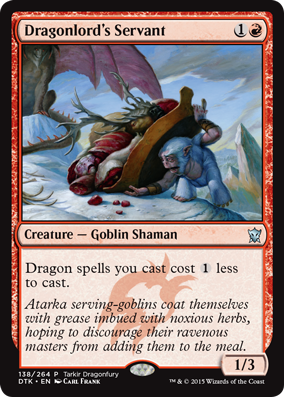 Dragons is slated to have more dragons than any other set so far, which is great news for Commander players.  When we built our Tasigur deck, I mentioned the need for “haymakers”—cards that you can count on to swing or end the game in your favor.  As large flyers that usually have extra abilities, dragons often qualify.  Plus, I mean, dragons.

There are a couple cool cards that aren’t dragons, too: 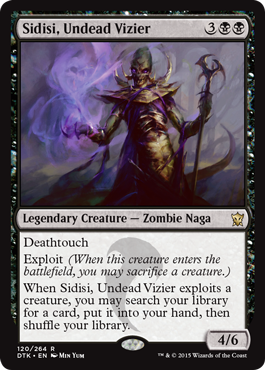 Sidisi can always sacrifice herself, so you are never worse off than getting a “tutor” effect.  Her 4/6 deathtouch frame is perfectly reasonable.  There will be more black and blue cards in this set which have exploit, so keep them in mind if you’re designing a sacrifice-theme deck. 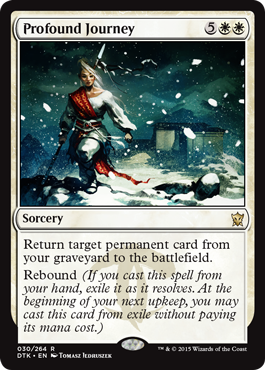 Seven mana is a lot, but reanimating two permanents (and not just creatures) could be very powerful.  Since you pick the next target in your next upkeep, it’s possible you could bring the same thing back twice, as well.

That’s all for this week!  Sound off in the comments with your suggestions for your favorite cards that I missed.