This is part three in a series about designing your own arcade cabinet. Click to read part one and part two.

Ok, now we have the design we’re going to be shamelessly ripping off for this cabinet. As I said before, I’m super inexperienced so I’ve decided that I want to have all the parts I’m going to need on hand before I start building the cabinet itself. This is for two reasons: I’m impatient and like to get toys in the mail, but also I don’t want to build the cabinet and then have to make alterations later if the screen doesn’t fit or I need extra room for the buttons. It’s time to start looking for a screen! 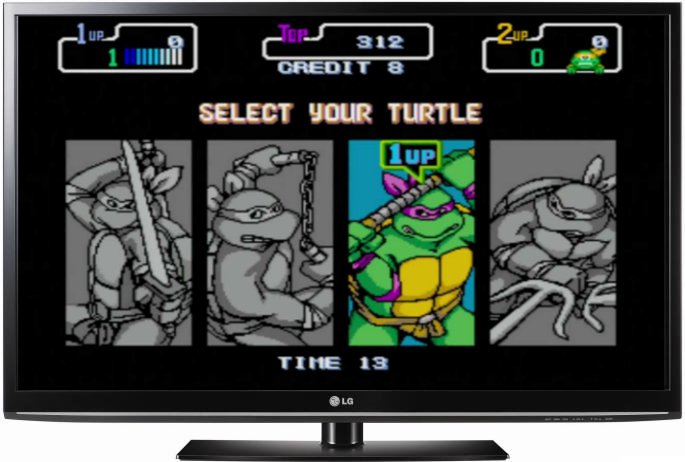 Some hardcore enthusiasts like to recreate the traditional arcade experience. That means they want an old CRT (think of your grandparents TV, kids!) complete with scan lines and distortions to create an arcade perfect experience. That would be fine if we were strictly playing classic arcade games, but this cabinet is going to play a range of games dating from classic arcade to N64/PSX era. Some of that newer stuff just won’t look as good as it could on an LCD. Not to mention that having a CRT would completely blow past the size goals I set for myself. It really comes down to a matter of preference.

The one caveat you might want to think about will be aspect ratio. Most LCDs will have a 16:9 aspect ratio. That means that for every 16 pixels across, the screen is 9 pixels tall. Older arcade cabinets and consoles that I’ll be emulating for the most part used screens with a much more square 4:3 aspect ratio. As you may or may not be able to tell in the image of TMNT above, this can make the picture appear stretched out. This isn’t a huge problem. If it bothers you, you can simply set up your emulators to display in a 4:3 ratio which will display black bars down the left and right sides of the screen.

LCD it is, then! Time to start looking at 32″ displays. I’ve decided to go with an LED over an LCD as LEDs have a few minor color advantages and these days it wont really impact the price much. You can read more about the difference here. As for the resolution, 32″ LED TVs usually come in either 720p (1280 x 720)or 1080p (1920 x 1080). You don’t need to worry about those numbers too much. Just know that the higher the number, the sharper the picture. Since the most advanced systems I’m targeting natively display at 480i (640 x 480), I’m going to save the money and go with a 720p TV.  Don’t get too caught up in how many ports a TV has or if it’s a smart TV or whatever other features it may have. We don’t care about that stuff. All we need is one HDMI port and we’re good. We would have been find with a computer monitor but for various reasons, those are actually more expensive.

Now that I know specifically what I’m looking for, I’m going to do a Google search again, using their shopping feature. One thing to keep in mind when looking at different LCD TV brands is that the actual LCD screens themselves are pretty much all made by only a handful of manufacturers, so do your research, but don’t be too paranoid about going with a brand you’re not familiar with. I found this Insignia (Model #NS-32D312NA15) via Best Buy. It’s actually little cheaper now than a couple weeks ago when it was $170 new. I actually went with the open box model which brought the price down to $150. Not bad at all. Having received the screen, I can say the only gripe I have about it is that it has a power brick. That’s not a big deal, I can discretely tuck that away inside the cabinet.

Ok! TV is ordered. Time to start thinking about our controls. That’s next!