I can call you Aziz and Alan, right? I thought about addressing this letter to “Messrs. Ansari & Yang” but it just did not seem right. So, Aziz and Alan, I watched your new show, Master of None, and thoroughly enjoyed it. The comedy and drama were well balanced and the music was on point. But I am not writing to thank you for making me laugh; I am writing to thank you for making me think and cry. 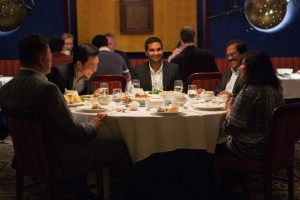 You see, I immigrated to the United States from Nepal in 1999. I was 14 years old and I had just moved from Kathmandu, the capital city of Nepal, to Richmond, a smallish town in Kentucky. It was a huge culture shock because the picture of America in my head did not match up with the America I was seeing. I didn’t sit on the couch and cry like Aziz’s mom, although there were times when I wanted to. Still, it was fun and exciting; experiencing new things and meeting new people. I would eventually move to various parts of Kentucky and meet many different kinds of people – a majority of whom were great but then there were also those who were less than great.

The ones who made fun of my name and/or my accent. My high school English teacher who asked me if she could call me BJ because Bijaya was too hard to say. Those who talk to me slowly or loudly and, once they hear me speak, ask me how I spoke English so well. The ones who pretended to not understand my English and asked for my co-workers to help instead. Those who insist on telling me that I’m so exotic and they just LOVE exotic women. The ones who insist that I am lying about not being Hispanic. Those people who have commented on my achievements by saying that I must have gotten into that school or gotten that job because I’m a minority and a woman – aka I am “two boxes they can check off”. Even my friends, who have told me that they see me as “basically black” or “basically white”, even though I’m literally neither of them. Or the ones who make countless Asian jokes but I’m the one who feels awkward about asking them to stop. My sisters have had people mistake them for their kids’ nannies because their children are mixed race with lighter skin tones. Or have had people just assume that their husbands are not with them because, you know, in 2015, how could there be a mixed race couple? I now have automatic answers to questions or comments I have heard a thousand times (I started learning English in kindergarten. No, I have not climbed Mt. Everest. No, I’m not a Sherpa. Yes, I know I don’t look like what you picture as an “Asian”. Yes, I know I have brown skin but I don’t know Spanish. Oh you have a thing for Asian women…that’s great and not creepy at all.)

The episode “Indians on TV” made me think about how brown people still aren’t cast for major roles because we are not seen as relatable, which made me think about the many racist remarks and micro-aggression people like us have dealt with and how it has just become a way of life. The assumption is always that we are not American; we are still outsiders. 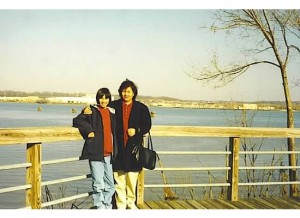 Baby Bijaya and my Mom

While my experiences have hurt at times, what made me sadder was the episode Parents of your show. The whole episode made me think (and cry) about my parents’ sacrifice in moving our family to America. My dad left a pretty good government job in Nepal so that he could work and live in the U.S. and give his kids a better lease on life. My mom, who had never worked a day in her life, took up a job here. I can’t even imagine how daunting it must have been to restart your life and career in your 60s in a new country, all in the name of family. Parents also make me think more about their experience in the U.S., which I admit, I had never thought about before. It was hard for my dad to find a job at the beginning but, being a teenager, I never thought about asking how he was doing or what I could do to help. He took whatever job he could get and he worked hard at it. So did my mom. The enormous sacrifices they made in starting their life over in a new country – I guarantee that I would not be where I am today in life – whether as an attorney or as a writer/editor for GeeklyInc, had it not been for their sacrifices. Not that I had not realized this before watching your show, but Parents made me think about it more than I have before.

The scene in Parents about the hospital not taking Aziz’s parents out to the steak dinner made me think about how people treat my parents differently. They both have accents but speak English pretty well and yet, when we go out in public whether to a store or a restaurant, the service staff almost always look to me to for answers in lieu of my parents. Or they will listen to my parents and then turn to me to repeat what they said. Why? Because they just assume that my parents don’t know English and their assumption makes the English they heard my parents speak incomprehensible. I know people might not see this as a big deal but it has shaken my parents’ self-confidence of speaking English in public and that breaks my heart. The assumption is always that they are not American; they are still outsiders. 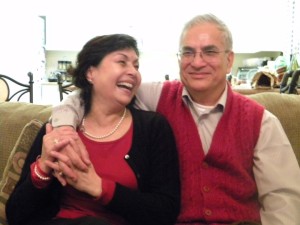 Your show  made me reflect on my journey as an immigrant and also think about my parents’ journey. For that, I am thankful. Congratulations on the great show and I can’t wait to watch more.