Welcome, ladies and gentlemen, to your newest obsession.

There’s murder. A lot of murder. And there’s mayhem. So much mayhem. Sex and drugs and–well, okay, there isn’t any rock and roll, but there are a bunch of teenagers who do rock. And roll. And poison, stab, seduce, and steal. From each other, from the faculty of their assassin academy, and from the people they most despise: the rest of the world, which worships the suns instead of their dark and terrible lady of night.

Not that you could blame them. The goddess of night is also the goddess of murder, and she has little pity in her heart, not even for the young men and women who come to serve her. Mia Corvere is especially blessed among these children of the damned, since we (a) know from the first pages that she survives a world that is basically Westeros for YA in terms of character death and (b) has power over shadows and fear itself. She is an avatar of the darkness, and knows more than her fair share about death. After all, her father was executed in front of her, and her mother made her watch. She swore revenge on his murderers, but first she needs to learn how to kill–and how to survive in order to kill again. 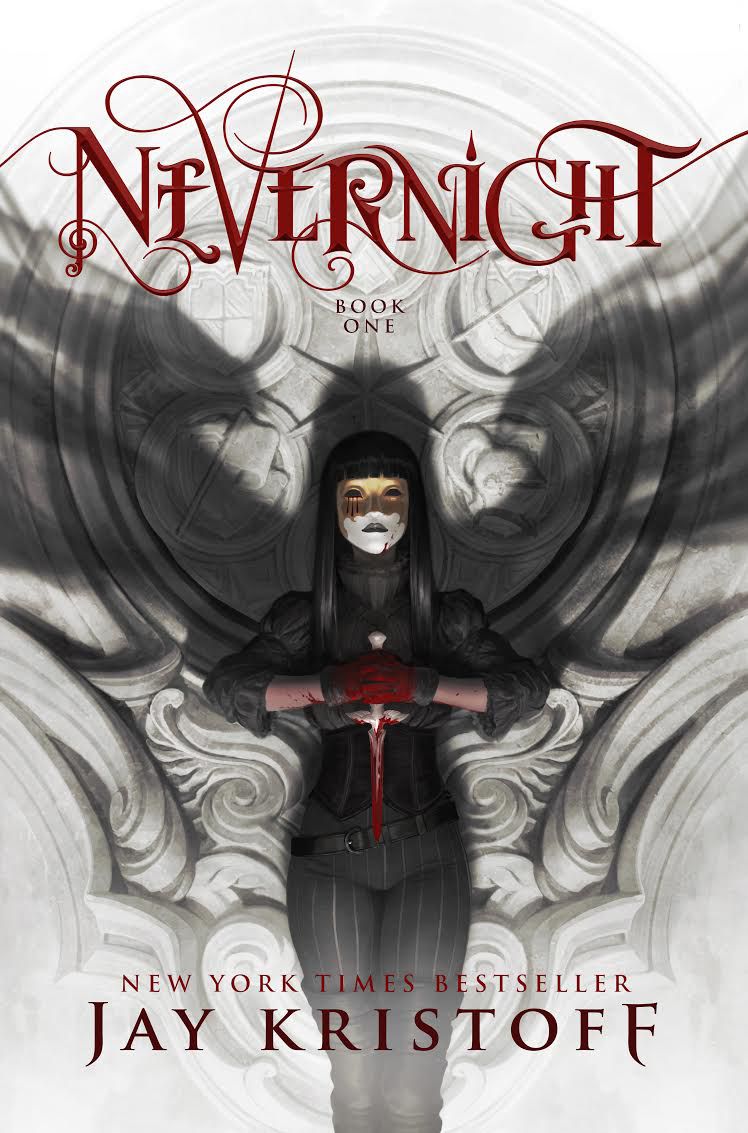 Thus we find ourselves at one of the most interesting schools since Hogwarts, the Red Church. Inside a hollowed-out mountain, hidden from both the sun and the dubious light of a Roman-esque civilization, Mia and other initiates learn all the ways to kill a person and all the ways to hurt them. Over the course of a year, they will compete–sometimes with deadly results–to win one of only four coveted spots to continue their training and their vendettas. The rest will remain acolytes of the church, their private quests ended.

The world reminds me a bit of Meredith Ann Pierce’s Darkangel trilogy. Three suns, rare darkness, and grimness. But while Pierce had a highly symbolic universe, the Nevernight universe is grit between your teeth and toes. It doesn’t skimp on the blood or the bad feelings, and it doesn’t spare your sensibilities. Love is in short supply here, and happy endings are out of the question. That doesn’t mean there isn’t loveliness or warmth. It just means that Mia has a mission, and however heartbreaking it might be to see, she isn’t going to be put off by easy, Hollywood solutions of romance or mercy. She’s in it to win it–the competition, and then her fame as the woman who brings down an empire. And a church. And maybe even a god.

There are quite a few teenage assassins these days–see also Throne of Glass, Hit, and His Fair Assassin–but this might just be my favorite of them all. It’s quite twisted–which is to say, exactly as twisted as it needs to be to really sell me on the psychology–and physiology–of a killer. Since we witness her training, we see Mia struggling to master techniques and mask her uncertainties, not just Mary Sue-ing her way to dominion. Everything feels extremely earned here.

Exposition and commentary in the form of foot/endnotes litter the first half of the book especially, but fall off later. Perhaps it was my copy*, but having them as endnotes was particularly irritating. I am not eager to interrupt a fairly standard narrative structure (description, dialogue, the usual accoutrements of story) by flipping back and forth to find out whether there is going to be further explanation of an unfamiliar term or merely a sarcastic comment. (The sarcasm in particular undermines the narrative a bit, undercutting moral and emotional issues with humor as if the author is embarrassed by his own pathos.) I would have vastly preferred the snark to remain inline, or removed only parenthetically. Though I suppose the conceit of the story being written as an account of Mia’s life does–theoretically–lend itself to footnotes, this is not Jonathan Strange and Mr Norrell or House of Leaves. It’s YA with extremely mature themes, or it’s an adult fantasy with teen protagonists.

It is, in short, a style that was still trying to find itself at the outset. I’m all for genre- and style-bending, but this was…muddled. It was like a fusion restaurant that’s trying to do too many things at once. Sure, you might love kumquats and sushi and shepherds pie, but together? Not so much. Fortunately, Kristoff finds his footing about a third of the way in, and the asides become more serious, the tone evens out, and the drama really begins to unfold. And the emotional torment. Prepare to have your heart tossed around and stepped on, and for your breath to spend most of its time caught in your throat. This is a pulse-pounding, balls-to-the-wall triumph of a book, and to top it all off, I absolutely did not see the ending(s) coming. There are several twists, all of them remarkable, all of them well-executed (heh). I stayed up way too late to find out all the secrets, and even though I was a wreck for several days, it was worth it. It was so, so worth it.

Nevernight (the first book an as-yet-unknown number of books in a series) comes out on August 9th. I recommend buying it early, then either devouring it so that we can all commiserate that book two won’t be out for ages, or waiting so that you can just jump right into book two. Okay, you won’t actually be able to resist. So just get it.

*e-ARC, Kindle, unsure whether other kindle editions will have the same issues