I sometimes find it difficult to critically review new tabletop offerings from Mayfair Games independent of their previous ones. It’s as Mayfair is some storied rock band from my youth, responsible for so much joy for so long that I’m not sure if their latest single is any good or if I’m simply deferring to my nostalgia. So when I played Fight for 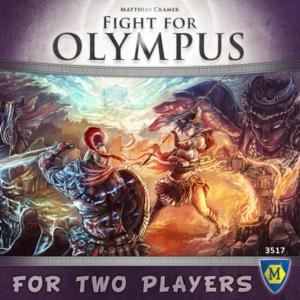 Olympus, Mayfair’s 2016 board-and-deck game, I needed to think about it independently of the tactical marvel Agricola, the afternoon-absorbing Caverna or the vaunted Settlers of Catan. I needed to weigh the game on merits instead of just assuming that Mayfair knows what I want more than I do.

As the name suggests, Fight for Olympus is drenched in Greek mythology, which is a ripe setting for a two player card game, since it packs a lot of epic-ness into a small space. Players take turns drawing famous Greek heroes, semi-famous Greek soldiers, and not-famous-but-hey-not-everything-needs-to-be-famous Greek equipment cards from a central deck and using them to control one of six locations on the game board.  To put a card onto the game board, you need to pay an activation cost to play it, which shouldn’t be a surprise to anyone. But the “mana mechanic” in Fight for Olympus is so clever that I actually blurted out “Wow, that’s clever!” as I was going over the rules. Every card in the game is both playable and usable as mana. So you may find yourself in a situation where you need to spend the mighty Achilles like soulless goshdarn currency to put Helen of Troy into play.

Managing your hand, therefore, becomes key, as each turn forces you to assess what assets you’re willing to sacrifice to get other 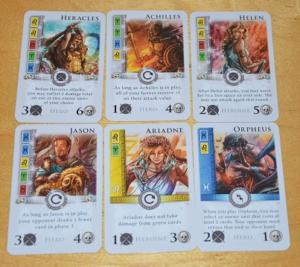 , more valuable assets on the board. And with multiple win conditions (a score counter being just one), each player must be aware of which the other is angling for. Mercifully, there aren’t too many late game surprises or sudden tempo changing plays that throw the game for a strategy-invalidating loop.

There aren’t that many sticking points for me in Fight for Olympus, which makes the few flaws that much more glaring. The cards-as-mana mechanics are great, but I get a sense that there are some cards that are never going to be played as anything but mana. And while the card art is well-designed and pretty, the board art is cluttered and doesn’t fully utilize the setting. And though the lack of bottom of the ninth “this changes everything” maneuvers pleases me from a storytelling perspective, it makes it that much harder to dig out of an early hole if your opponent gets some great early card draws.

Fight for Olympus stands on its own as a clever and quick to learn game that draws upon a great mythos for flavor, but likely won’t go down as anyone’s favorite Mayfair game. It wasn’t the band’s best rock song, but Mayfair can still make ‘em dance.