Before heading to PAX East this year, I did my due diligence in researching the indie titles that would be in attendance.  Each year we are inundated with press e-mails about which games will be shown at the yearly convention in Boston, and with a scant three days to check them out, you need to be choosy.  Trusting my gut, I met up with the member of Nyamakop, a team of two indie developers from South Africa consisting of Ben Myres and Cukia “Sugar” Kimani.  It was as good a choice as eating my weight at Flour Bakery the day before (read: VERY good). 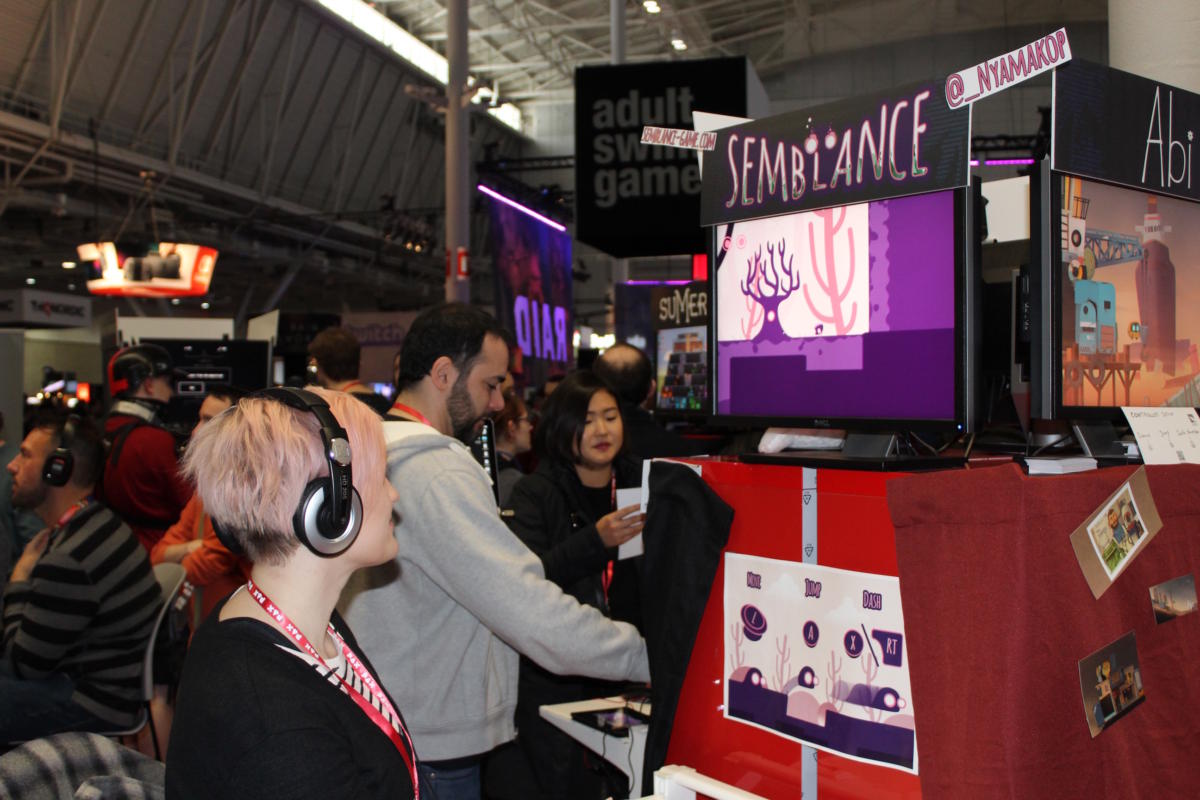 You could tell instantly upon greeting the Nyamakop team that they love making games.  Ben, their frontman, was excited and engaged, while his teammate was quietly watching folks test their game, taking internal, gameplay notes.  The excitement stems in part of their attendance at the convention, their first year at PAX East with the Indie Megabooth.  The team recalled the challenges of making games back home in South Africa, where just uploading their build across their internet connections takes ages in comparison to their North American counterparts.  Though they looked to be perfectly at home with the games of the Indie Minibooth (predominantly dominated by north american games), Ben was adamant about his love for, and the support they receive from, their tight-knit game development community back home.

Now let’s get onto the game!  The mechanics were simple (my favorite kind); maneuver the world of Semblence by manipulating the world elements, much as you would playdough.  You play as a ‘blob’ of clay, with two adorable, glowing eyes in a side scrolling adventure to rid your world of a crystalline infection that is turning your soft world, jagged.  You can jump and squish your way to collect orbs which unlock further areas of the game.  The basic win-condition involves deforming platforms (higher or lower depending on where you’re jumping from) to reach goals, as well as bending beams of light that either engage or negate those deformations.  There are the usual pitfalls to avoid, as well as pieces of jagged, blue crystal that force a section re-load when hit.

The soundtrack, while hard to hear on the convention floor, can be previewed on Soundcloud and is scored by Pressure Cooker Studios.

What struck my initially, and what was the reason I chose to cover Semblence, was how incredibly stylish and striking it was.  The art is beautifully simple, the color palette compliments itself perfectly and the gameplay was basic but still provided challenges (I…died a ton, which was embarrassing enough with the creators watching from behind).  Semblence is, essentially, the perfect combination of what I look for in an indie game!

Semblence is slated for release sometime this year (no firm date set as of post date) for both Windows and Mac, likely via Steam in the range of $5.00 – $10.00.  If you like the world deforming mechanic, also check out the indie game, The Floor is Jelly by Ian Snyder!