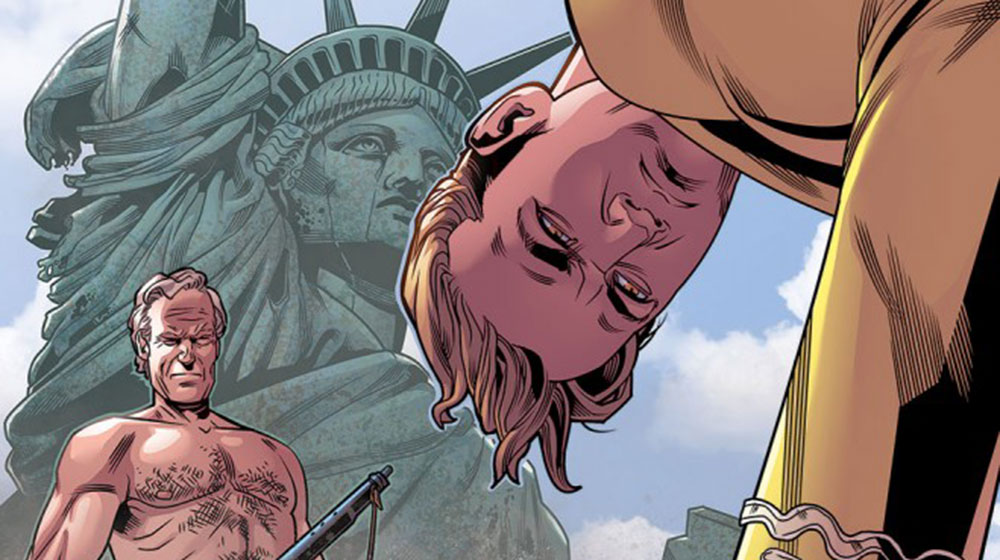 If you missed my review of issue one in the series, you can check that out here. This time around Kirk meets old Bright Eyes himself, NRA spokesman George Taylor.

The first issue of IDW & Boom Studio’s Star Trek / Planet of the Apes: The Primate Directive was a bit of a slow burn, so you better believe that issue 2 was going to kick off with an action sequence. Apes quickly get the drop on Kirk and Spock, shots are fired, and a redshirt is wounded but miraculously not killed. After a quick getaway, the away team discovers a small group of homosapeans. To their dismay they find that the humans of this Earth are unable to speak and have the mental capacity of small children.

Back on the Enterprise, Bones introduces Lt. Weaver to the Captain. She is a member of the Biological Sciences Division and is really excited to get the chance to study parallel and divergent development. It also gives an opportunity to bring up an interesting argument: Does the Prime Directive, which states that Starfleet is not to interfere with developing alien cultures, still apply not only in another dimension, but on a parallel Earth?

Kirk here makes the very Picardian decision that it does, in fact, apply even though it’s a version of Earth, unlike that lousy Scotty who gave technology early to that manufacturing plant guy in Star Trek IV. With that resolved they are off to Earth again, and are beamed right next to the (SPOILERS IF YOU STILL HAVEN’T WATCHED PLANET OF THE APES YET YOU HEATHEN) ruined Statue of Liberty. This nicely places the comic book in the timeline of the movie for the audience, which apparently equates to right after Taylor gets his act together and stops wallowing in self pity over the destruction of humanity (the big baby).

Taylor and Nova apparently decided to rest about ten minutes after the credits rolled, because Kirk and the crew catch up to him almost immediately. Shots are fired, peace is made, introductions happen, and we are reminded that Taylor is kind of a jerk. He really wants Kirk to send soldiers in to take out the apes. To convince him of how bad things are, he suggests Kirk meet Cornelius and Zira. They beam over to the dig site and are given a breakdown of how ape society is structured. 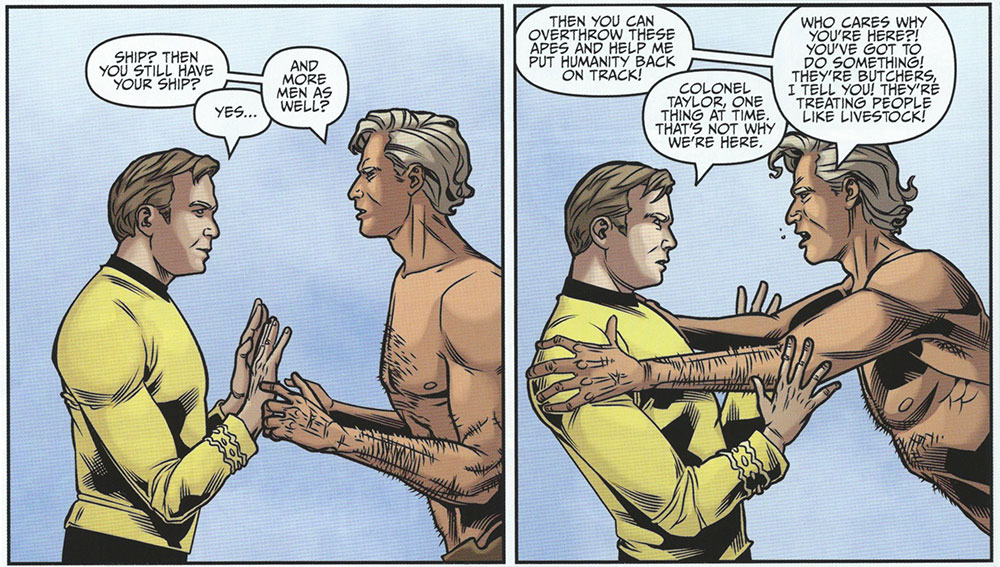 Again, Taylor tries to convince Kirk that the right thing to do is use the Enterprise’s weapons to kill the apes. Taylor agrees to play nice for now, but behind everyone’s back knocks out Chekov and steals his communicator, probably thinking it’s a weapon of some kind.

Issue 2 moves at a much faster clip than the first. It does an excellent job of bringing in the optimistic curiosity of Star Trek with Taylor’s bleak outlook and miserable disposition from everything he’s been through in the original Planet of the Apes film (mixed with the fact that he’s kind of a jerk). So far, I am pleasantly surprised by how well these two universes are mashing up. I was unsure from the first issue, but at this point I can honestly say this is one you should look into.

This issue also has an excellent essay in the back by Dana Gould about why the two universes compliment each other so well. It’s worth sticking around for.