Tad Williams begins a new journey in the world of Osten Ard with his new book The Witchwood Crown, the first book of a new trilogy The Last King of Osten Ard. Though earlier this year The Heart of What Was Lost served as the first return to Osten Art since the release of To Green Angel Tower in 1993, this is the first book to return us to many of the characters we remember from Memory, Sorrow, and Thorn with the addition of new characters as well.

Though there are returning characters you do not have to read any of the original trilogy to enjoy this one. The returning characters are now thirty-years older and their experiences in the original trilogy are now the stuff of songs. All the important events of the previous trilogy are referenced like many fantasy novels reference its own history to make the world feel lived in, just as the thirty year gap is referenced as well. The reader will quickly get the drift of what happened without giving away any of the important details that may take you back to that original trilogy after reading this book. However, there will be broad details of the fate of many of the characters that will spoil those books for you. If you’re the type who is both a completionist and will have their experience of a story ruined by spoilers it may be best you read Memory, Sorrow, and Thorn first. 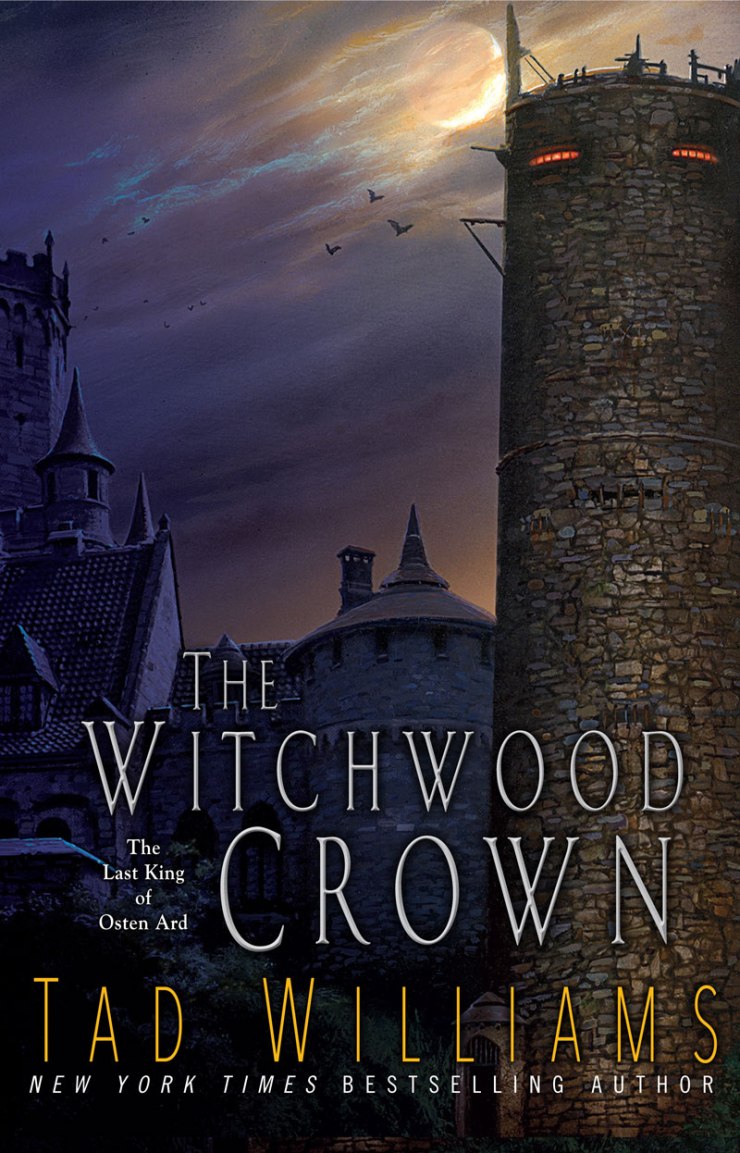 Like other Tad Williams’s novels before this one, the plot simmers slowly in the beginning with tension building to a crescendo as more information is given and event unfold. Once Williams has sown proper affection for his characters into you drawn you into their lives that is when the trap is sprung. Everything boils over leading to inevitable change, tragedy, and betrayal you hoped would not happen to those you’ve grown to love or hate.

New characters such as Jarnulf, Prince Morgan, Nezeru, and Brother Etan provide different points-of-view joining Simon and Miriamelle from the original series and the Norn, Viyeki, from The Heart of What Was Lost. In The Dragonbone Chair, the first book of the original trilogy, we followed Simon for a large portion of the opening chapters. The world began for the reader only through his eyes and on his journey, By beginning The Witchwood Crown with many points-of-view straight away all the worldbuilding is easier to digest and understand

While the original trilogy shows Simon’s coming-of-age from a whiny scullion to the man and hero he becomes by the end of the trilogy, his grandson, Prince Morgan, begins his journey from a place of privilege. Though his story starts him out from much higher birth, Morgan’s journey shares a similar tone to Simon’s as he slowly goes from spoiled drunkard prince to someone who may be responsible enough to one day be king. Just as stubborn as Simon was, he takes these lesson begrudgingly.

The Witchwood Crown has the perfect mix of nineties long descriptive fantasy mixed with modern style of writing that makes events go slowly without them being a slog. The shifting between points-of-view seamlessly in the chapter moving from one moment to the next is well done so the moments that are more relaxed such as the traveling in the beginning, the feasting, or similar down time moments for the characters doesn’t slow your pace while you’re reading.

New readers who are worried they will get lost or be withheld information about the world another author may expect his readers to already know do not have to worry. Williams has that skill every fantasy author should have of giving small amounts of information through the dialogue, actions, and thoughts of his characters, explains who everyone is without strolling into the territory of infodump.

Returning readers can look forward to learning new information about the world and the different people that live in that was only alluded to in the first trilogy. What is unique to this book as opposed to the other Osten Ard series is you get a much more faceted look of what it is like to be High King. Without the threat of the former antagonists threatening to tear the world apart King Simon and Queen Miriamele are in the place where they must maintain the peace. For those who enjoy the political intrigue of a George R.R. Martin book or similar fantasy, you get that as well as the hero’s journey saving-the-world type of story. Also, the book is unique from the original trilogy by giving the reader an engaging look into Osten Ard through the points-of-view of the Sithi and the Norns, elf or fairy like creatures as they are called, who live long lives.

While new readers do not have to read the original trilogy to enjoy this novel I do not recommend it for new to fantasy readers due to the long length. Otherwise, Tad Williams continues to prove why he is a mainstay in fantasy fiction influencing popular writers of today and the future.