All right, Sailor Moon Crystal, here we go again. Time for the Infinity Arc, the third season that will introduce the Outer Senshi and bring us the Witches 5. But first…the opening credits! 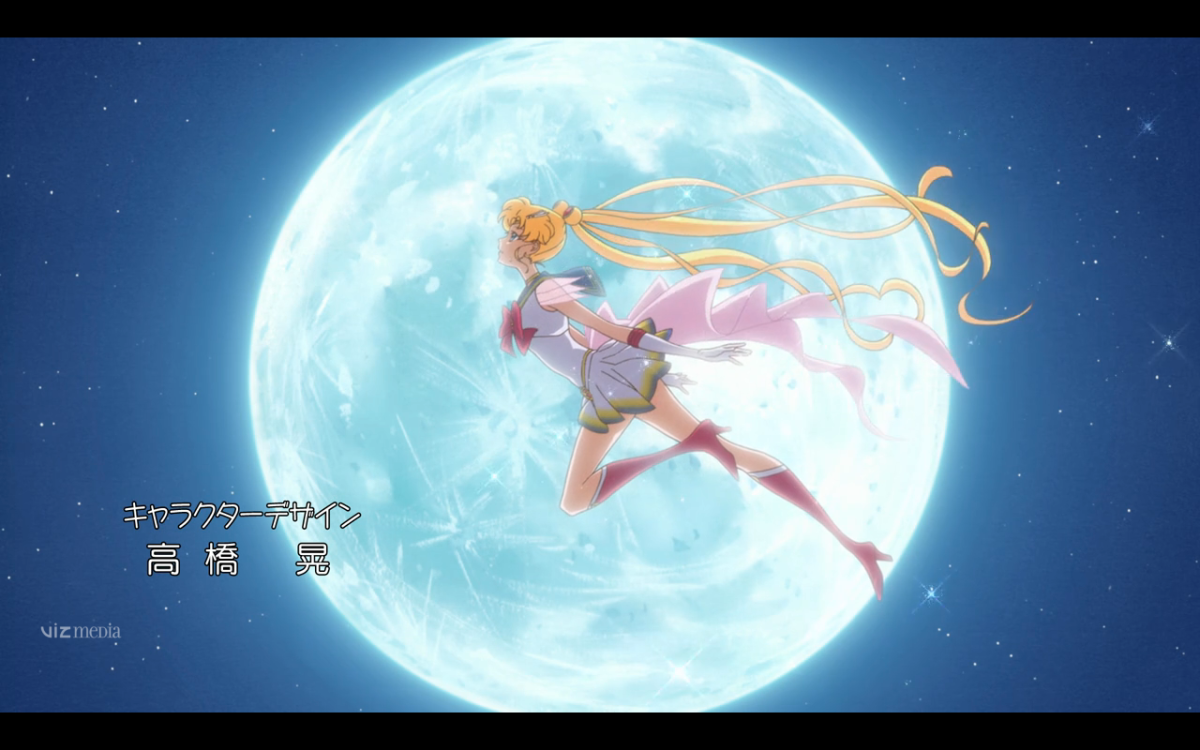 You know, I like this song. Do I think it fits with the season? No. The music box tinkling intro, the gentleness—it really should have gone with the first season(s), and “Moon Pride” could have gone with this one. But still, not bad. My only significant observation is wow the intro is channeling Madoka Magica something fierce. It’s not just the lacy, flowery embellishments that move in the strange, collage-like way that Madoka pioneered. No, it’s the depiction of Chibi-Usa and Hotaru. Does anyone else see the Madoka/Homura parallel there? Especially with the hair. I admit it never occurred to me to see Hotaru and Chibi-Usa as a shippable pair since they’re so young, but I guess it makes sense. 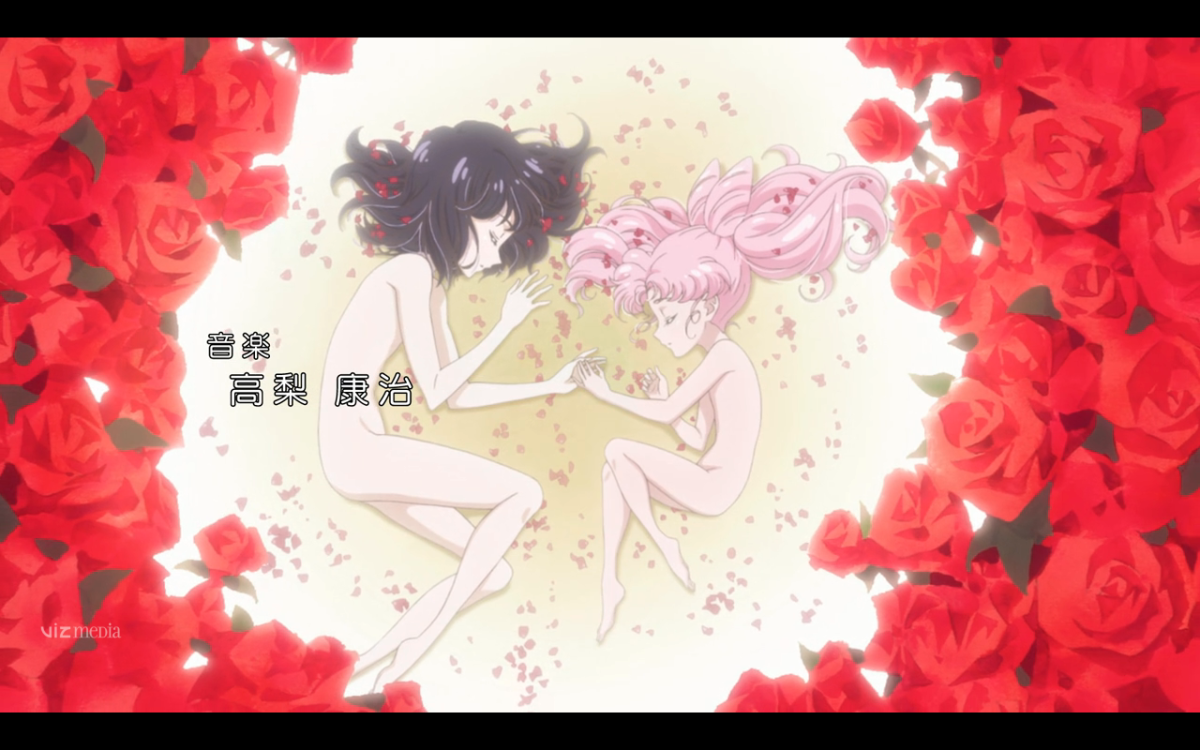 See also Utena and Anthy, as @StephOKingston points out. 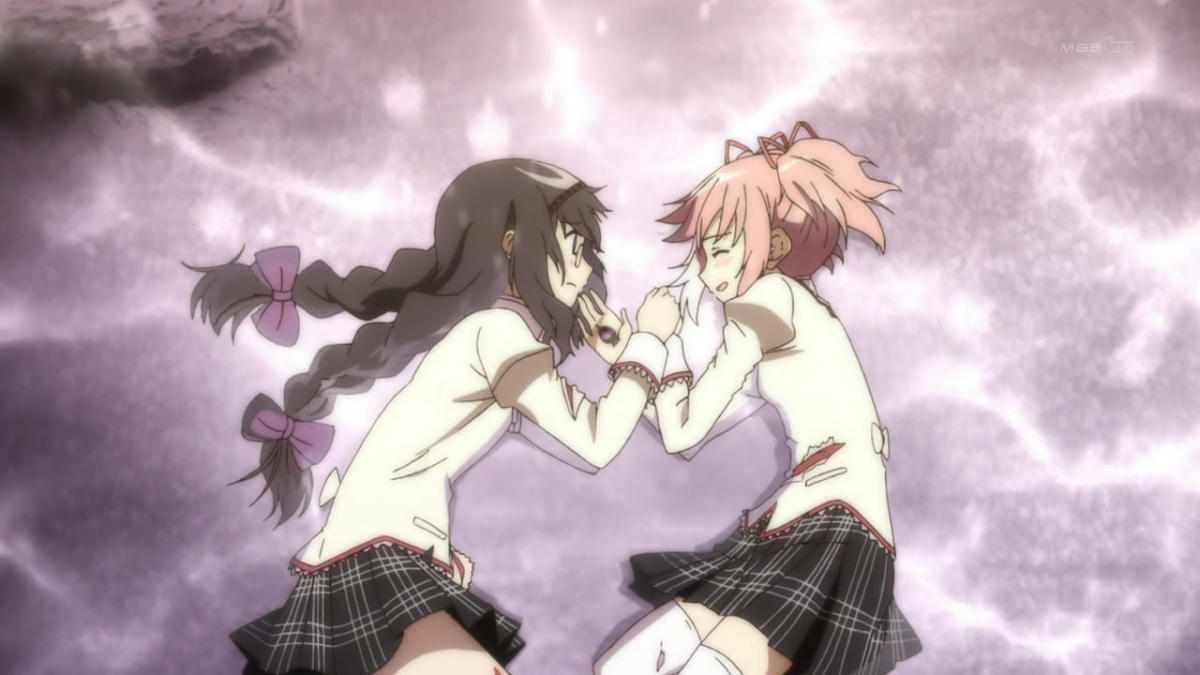 Mamoru and Rei are having terrible premonitions of disaster, and Usagi is dreaming about…her wedding. Ah, good. All is well in the Sailor Moon universe when Usagi is focused on love and a bright future. And I mean that sincerely. Crystal lost a lot of points with me by making everything so dour, so this amusing contrast has me hopeful for some impending humor. Still, they could have played it up more for laughs. 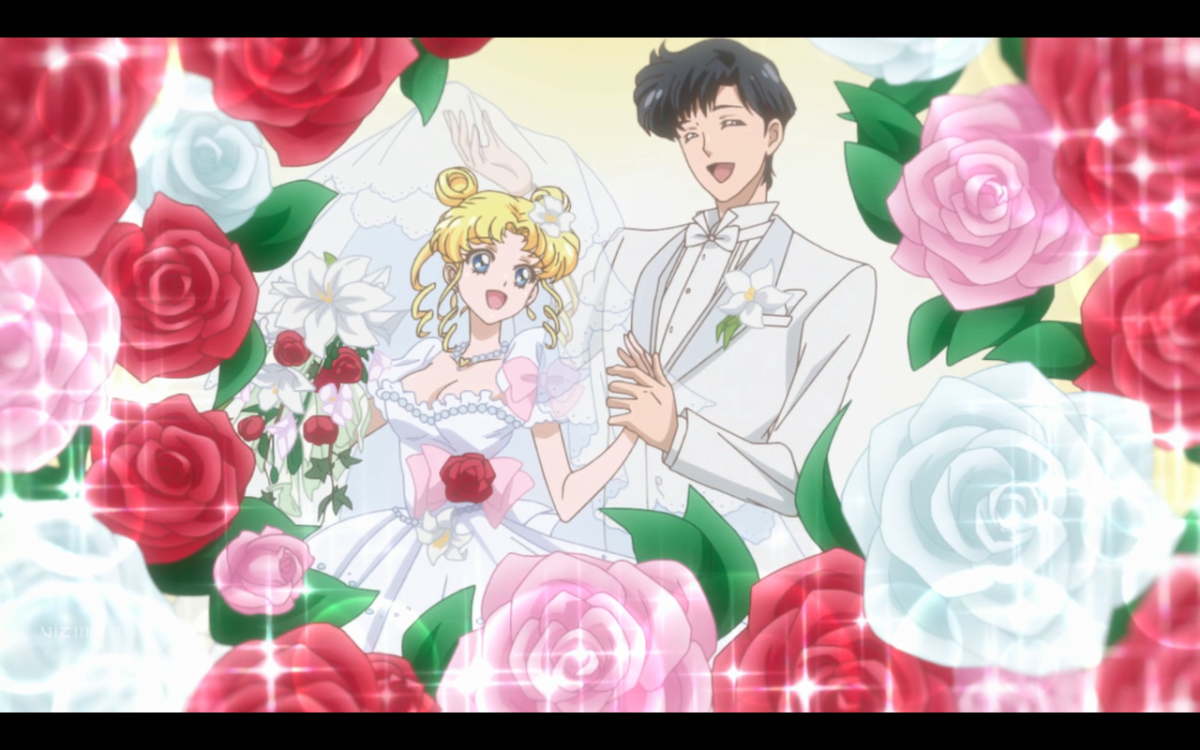 A wedding and a 10-inch waist. What dreams are made of…?

While Usagi sleeps in, Tokyo has its first rumblings of supernatural threats (again). The newscaster describes a monster attack as a “bizarre incident.” I forget, is this version of Tokyo one where everyone rides mini-Godzillas to work and has cyborg mecha-ninja girlfriends and demon pop-idol boyfriends? Is this, in other words, an anime in which the characters are a bit more aware they live in anime-land?

Oh, no. No, there’s the barest, barest attempt at a “scientific” explanation. They’re calling it “reversion,” with humans spontaneously turning back into ape-like creatures. Crystal, you managed almost ten minutes, but now I hate you and wish you were a person so I could flick your face. Reversion? Seriously?

Everyone is totally blasé about this and moves on. Papa Tsukino doesn’t even get off the couch, and Mama Tsukino is more worried about Usagi’s lunch than the fact that there might be a giant, red-eyed monster ravaging the city where her girls just ran off to school. You know, I take it back. This definitely has to be anime-land. 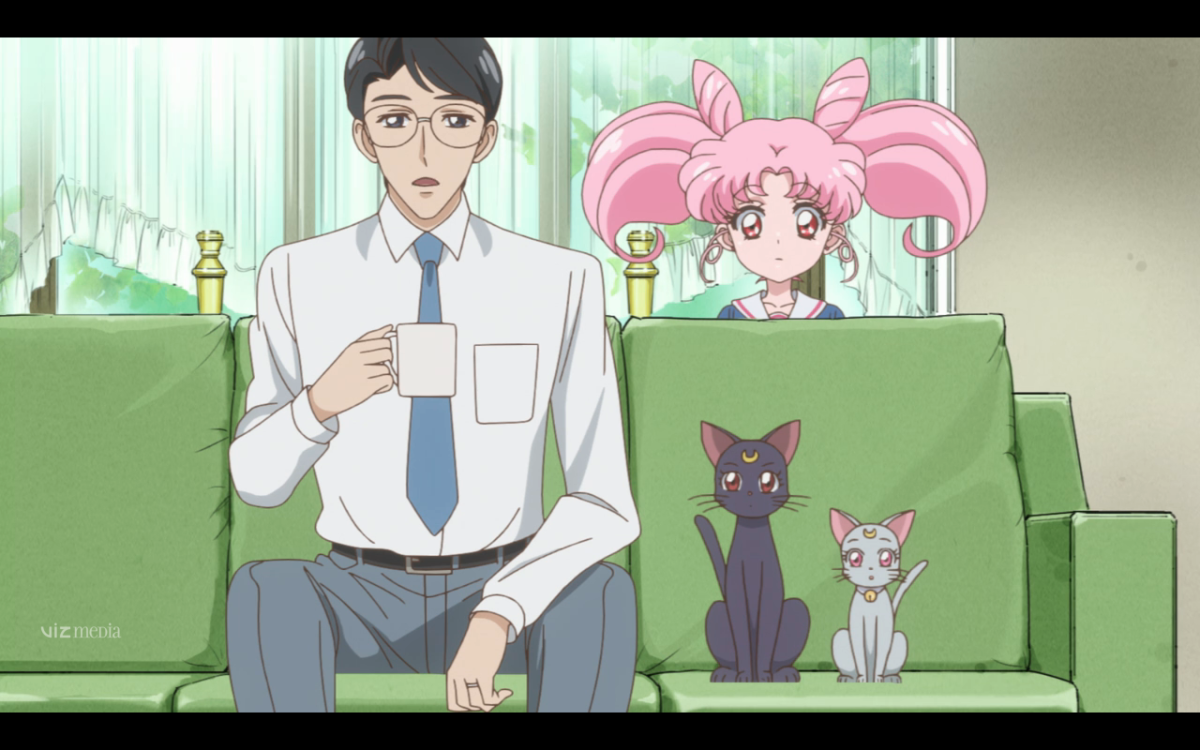 Mamoru, likewise completely chill, awaits Usagi at that park with the ugly clock, and we get a brief romantic moment before Chibi-Usa joins them. There’s still that weird jealousy between Usagi and Chibi-Usa as they compete for Mamo’s attention, which I still hate and still wish would go away. (They’re doing better on the animation, though, using the tropes of anime to actually be an anime, complete with sweat-drops and sparkles and pulsing anger veins. Woo!) And, well, Chibi-Usa does rush off after a brief dose of it, so at least it’s not sustained. She goes to join her friends, one of whom is wearing a qipao, because you can’t be Chinese in Japan without constantly identifying yourself as such, I guess.

Exit Chibi-Usa and enter the Outers. We’re treated to a couple of lingering closeups of Michiru’s swimsuit-clad body, and it’s just so disgustingly male gaze I can’t. I can’t! What’s the point of that sequence, other than to objectify her? Sure, she’s a swimmer, but always before those shots were meant to reveal flirtations between her and Haruka, not between her and the audience. Plus, where’s the mention that she’s a world-class violinist and artist? Crystal, I am disappoint. 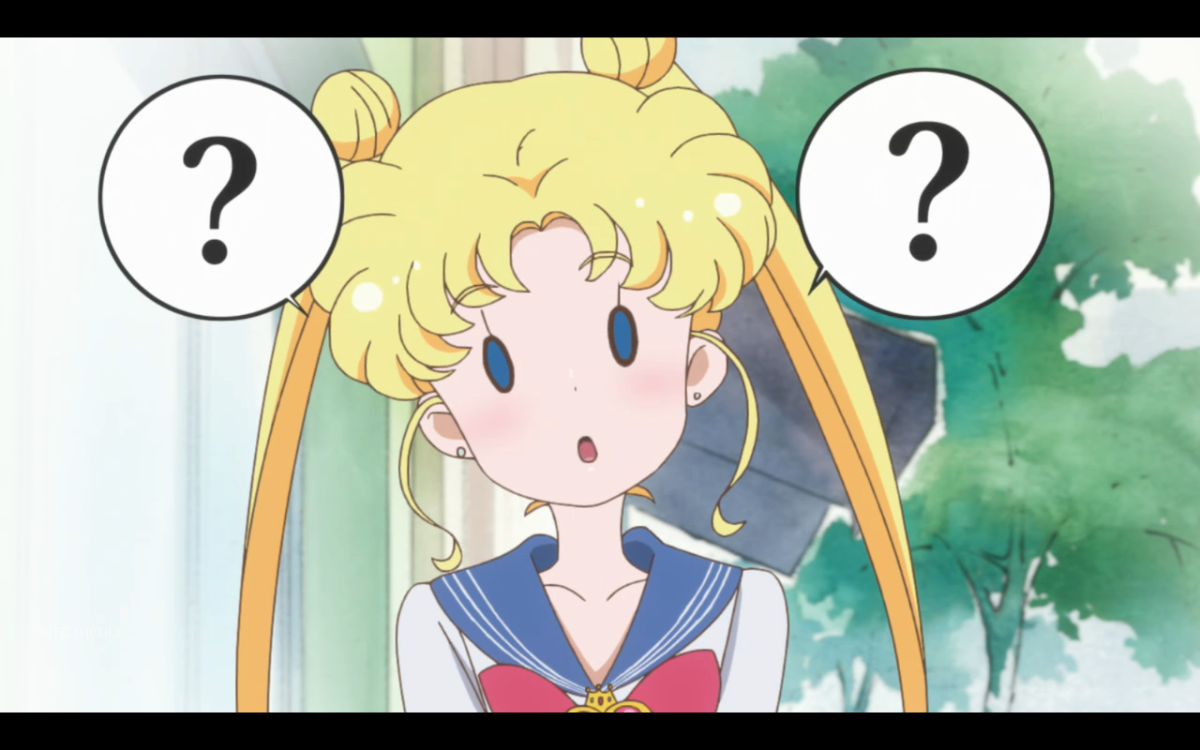 Even Usagi wonders why a full minute of objectification is necessary.

Haruka (whose name my autocorrect keeps trying to tell me is Hark), meanwhile, is a driver that all of Japan can be proud of. She’s entirely covered up. She’s also not yet revealed to be a she: they’re still using male pronouns. Which, fine, the original did that too. I’ll be interested to see how they handle the reveal.

But hey, at least they introduced the choppers. Yes, in the original, a climactic sequence has Michiru and Haruka inexplicably in a helicopter. Now it’s clear that they own those choppers and use them to get to school. (I get that Tokyo’s crowded, but really? That is just excruciatingly dumb. Not Crystal’s fault, since it’s from the manga, but dumb.) Their school is Mugen Academy, which the writers were likewise clever to put right at the forefront, since that also seemed obnoxiously convenient in the original. And all right, they mention Michiru’s violin skills here—better late than never. 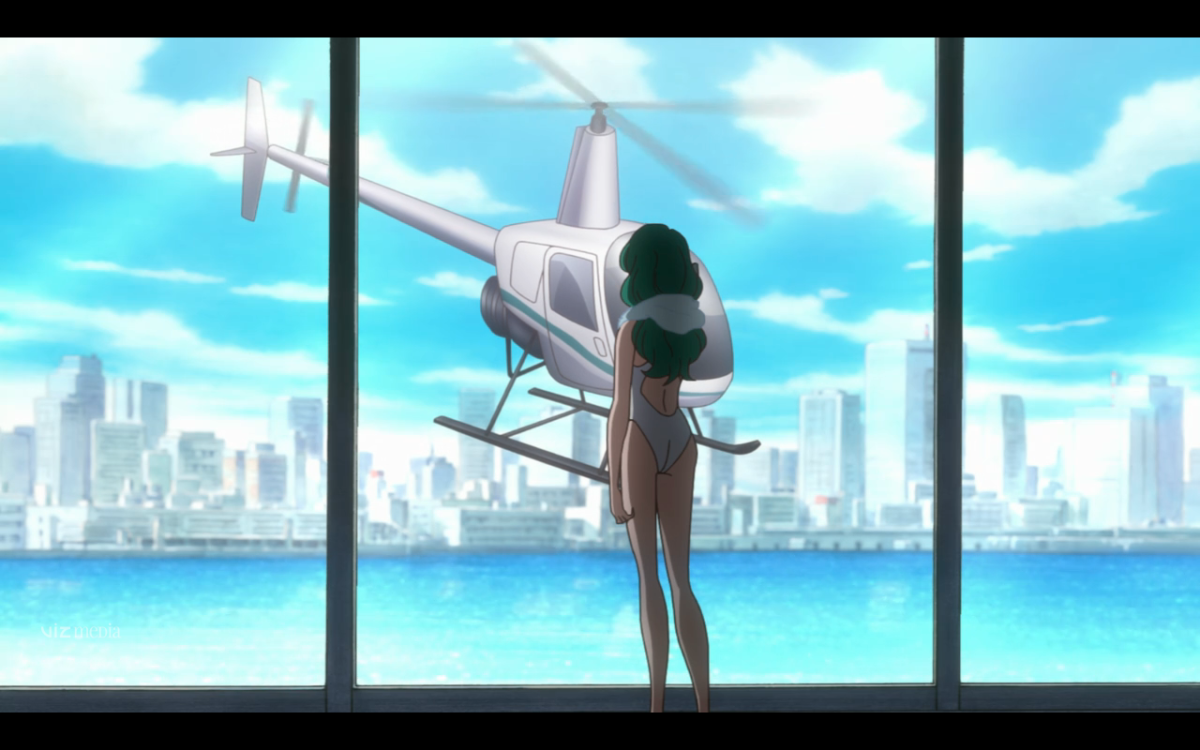 Switching back to Usagi, we’re reintroduced to the Inner Senshi at the arcade, and Usagi and Haruka have a race. Haruka sorta-not-really flirts with Usagi, and Michiru kinda-doesn’t-really flirt with Mamoru outside. Oh, and Michiru says that her mirror reflects people’s past lives, which is such a cool idea but I doubt if it will really get any more mention than that.

Aaaaaaand scene. That’s it. No more outer Senshi. The rest of the episode finally shows us one of those…sigh…Reversions when a girl is randomly transformed into a towering monster. Yes, I can totally see how this deformed spider-tick that emerges from smoke and glows would make people think it was a devolved human. Of course! It’s so obvious. 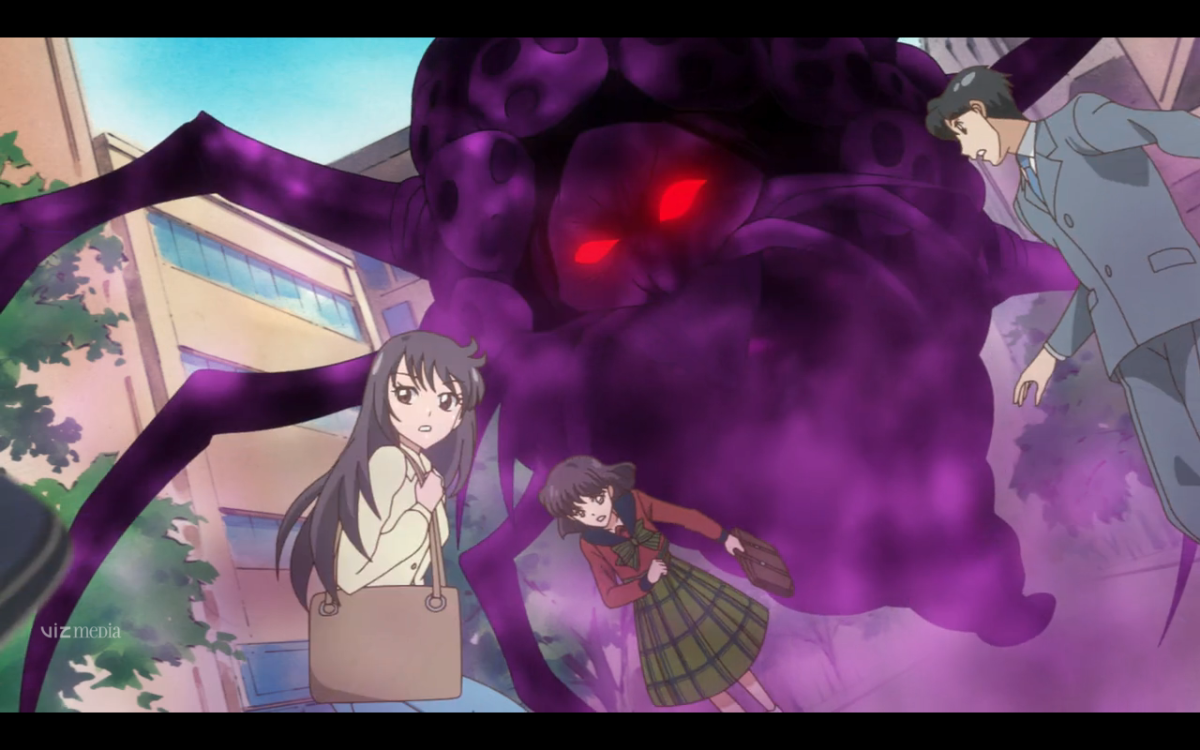 The Senshi gear up for battle, and while the transformation sequences still annoy me because their limbs seem so bendy and distorted, it’s a HUGE improvement over the CGI. And, apparently, a huge improvement in power over last season, too, since Venus and Jupiter make short work of the monster. (Rei and Ami help a little, too.) I don’t mind that they’re able to be badasses. In fact, it’s kind of nice to see the girls work together and get shit done. I do fear, though, that Crystal still hasn’t learned to make Usagi’s hope and kindness the heart of the show. Without her, it’s just girls beating up monsters, which is 33% of all anime at this point. 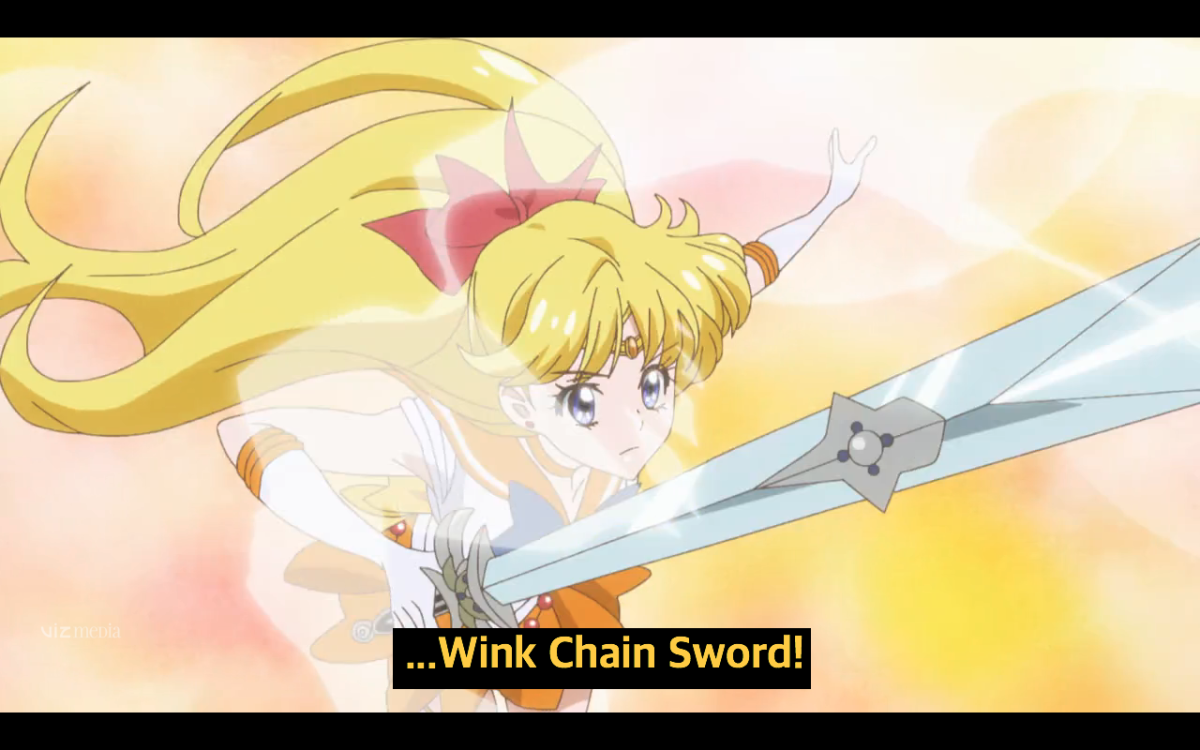 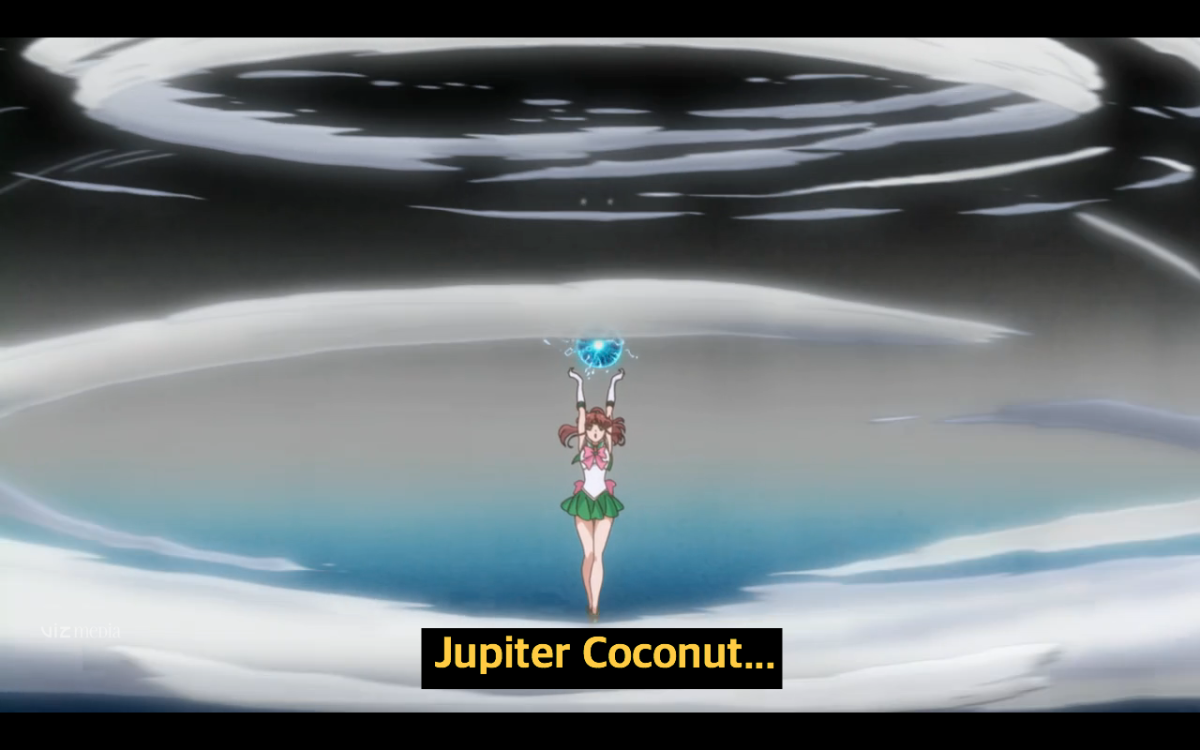 The Senshi draw a crowd by the time they’re done with the monster, but this is anime-world, so there are absolutely no consequences, and no one tries to take them in for questioning or get their autographs or anything. The girls just get to stand around looking quizzical, and then hie on back to their base, where they make the astute deduction to look into Mugen Academy. Good job, girls! And good job composers, since the credits theme is also decent.

Conclusion: cautiously optimistic! Until next time, 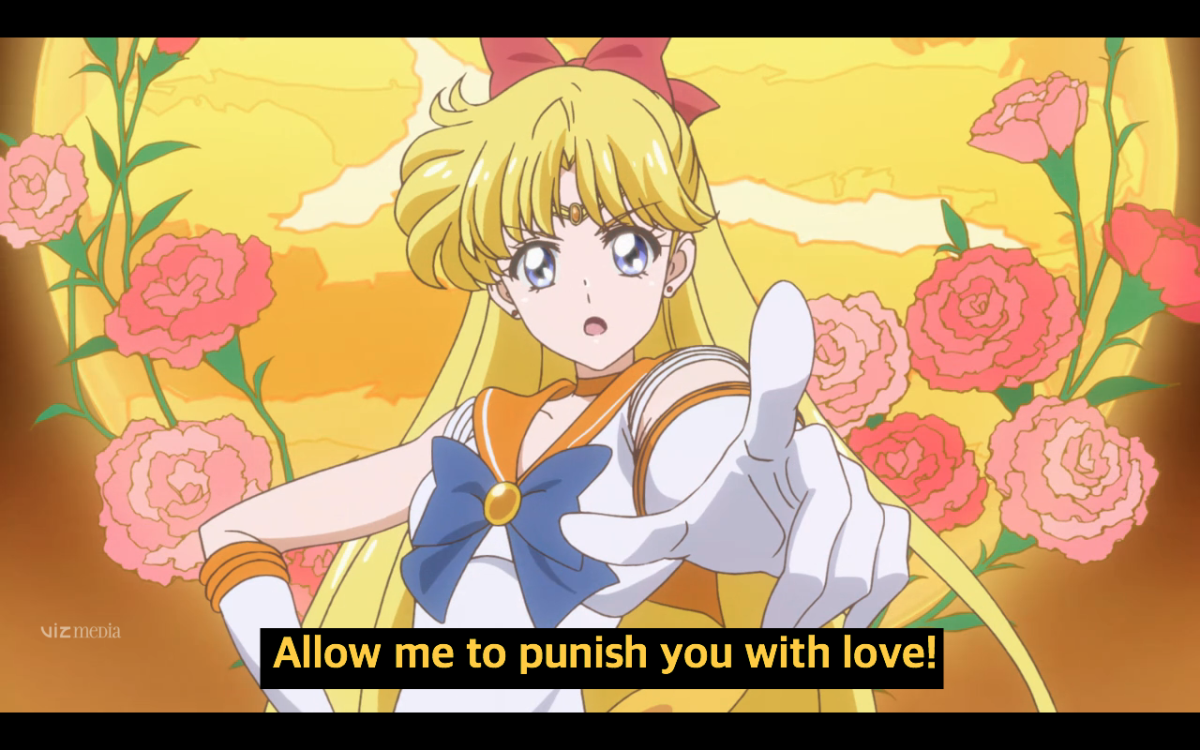