Transcriptions have been completed on a second item from the recently found GeeklyCon cache. This news clipping comes from a local Boise, Idaho newspaper, and recounts the 1986 GeeklyCon tournament which was won by “House Puddlefoot”. This new house appears to have a purple worm for a mascot. See below for transcript and scan of the original document.

A large disturbance was reported on July 23 at the Boise Ramada. A group of strangely dressed individuals calling themselves “Geekly-Con” were witnessed to be having some sort of Revenge of the Nerds style competition which carried on late into the night. As it is our understanding that “geeks” are solitary, and basement dwelling people, we believe this may actually be some sort of cult or real-life reenactment of Mazes and Monsters.

We were able to interview Adlynn Wilson, one of the competitors – though most of her answers were unintelligible. Ms. Wilson claimed to be part of a faction called “House Puddlefoot” whose mascot appears to be some sort of giant worm with teeth. According to Ms. Wilson, she was integral in helping these “Puddlefoots” win their annual competition. Even more bizarrely, she claimed that she clinched the competition by achieving a Pac Man “kill screen”, which sounds violent and possibly illegal to this reporter.

Thankfully this appears to have just been a one weekend occurrence. Several sources tell us that Geekly-Con will not be returning to Boise, and will take place next summer in Aspen, CO. While it seems bizarre that someone would want to visit Aspen outside of skiing season, these self-proclaimed “weirdos” seem like the types who would do just that. 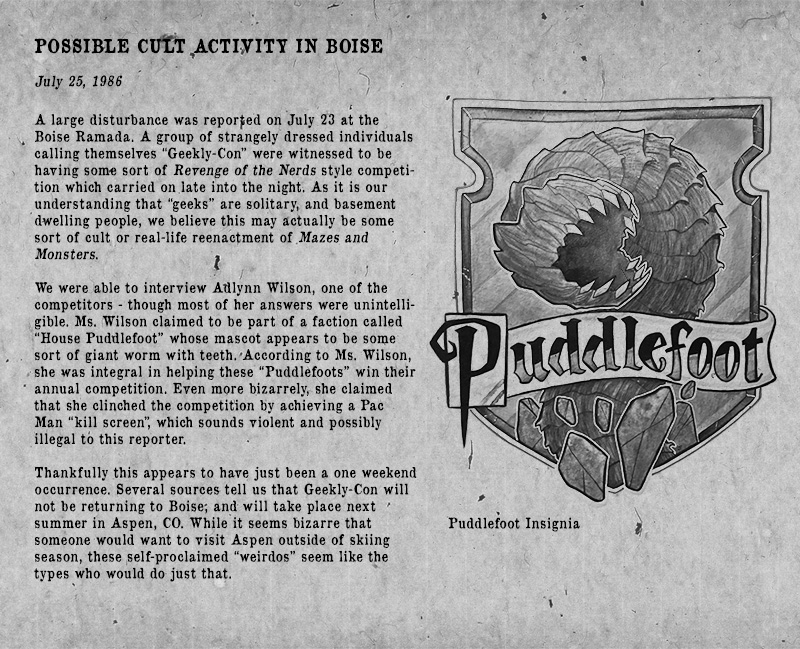