The Smoke Thieves by Sally Green is an intriguing high fantasy with excellent political intrigue but which lacks the grit and pathos of the Half Bad trilogy. It is Green’s first foray into a wholly fantastical world, and her tentative approach undercuts some of the drama and intrigue. Still, with its complex, interwoven story lines, it has a great deal to offer and much potential for the next books in the trilogy. Of particular note are the characters, five of whom share the story in alternating chapters.

The best and most suspenseful chapters follow Princess Catherine, whose mere glances could condemn her to violence or death, but whose spirit is undimmed. She is the daughter of a misogynistic tyrant obsessed with loyalty, and who enforces that loyalty with a cadre of inquisitors and executioners. Catherine is not immune from suspicion, and she works very carefully to secure her power while projecting the appearance of devotion. Her verbal repartee is quite brilliant, as it shows her working within established systems and using them to her advantage. When accused of disobedience to a man, she takes refuge in talk of safeguarding her chastity; when accused of being unchaste, she feigns obedience to honor. Her male keepers, though physically stronger, lack her legalistic sophistication, and she is able to subtly manipulate them into giving her what she needs. 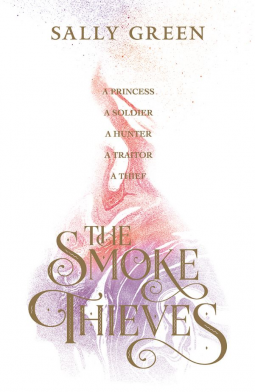 Every character has potential, but Catherine is the most fully realized. She is full of conflicting desires and clever insights, and her plans for herself are intriguing. Least realized is March, whose hazy memories and omnipresent anger render him frustratingly naive. He is easily misled by someone who shares his heritage, and never thinks to question or deviate from the path he has been set upon. Because we have little context for his losses and rarely get insight into his sorrow, it’s hard to connect with him emotionally. He’s more like the sketch of a character, the Sole Survivor bent on revenge. We do, however, have plenty of context to understand the people he has been manipulated into working for, and seeing him play into their schemes is frustrating even if it is understandable.

Edyon, whose POV chapters don’t begin until a decent way through the book, is intriguing but likewise naive. He’s also a bit stereotypical, the rogue with a heart of gold. He’s charming (of course), well-dressed (of course), and enjoys stealing for fun, since he already has plenty of money. But it’s his mother’s money, not his own, and his thefts are more of a pathology than a skill. Reimagining thievery as kleptomania is intriguing, but doesn’t sufficiently distinguish Edyon as a fully fleshed-out person.

Tash and Ambrose are straightforward in their desires and actions, making them enjoyable to read about but fairly predictable. Ambrose is yet another stock character, the Honorable Knight, but Tash is at least a little bit more than the Plucky Girl. Her job is to be demon bait, literally: she lures demons out of their dimension and lets them chase her until her partner, the huge warrior Gravell, can kill them. They make a good team, and Tash doesn’t want anything beyond that life except a pretty pair of shoes. No, seriously. She wants a pair of delicate ladies’ boots. Fantasy characters are so often motivated by the Fate of the World or by huge abstracts like destiny or honor, that it’s really refreshing to see someone with a limited and pedestrian concern. And while I am not myself particularly obsessed with footwear, I can sympathize with the gist of it. Tash is thirteen years old, and she wants something of her own, even if it is impractical. I support you, Tash!

There are a couple of romances, gay and straight, and I am pleased to see that Green has lost none of her skill with the slow burn. There is the practically-requisite love triangle, though with a fresh political twist, and a pleasantly gentle seduction full of kindness and compliments. Nothing is overwrought or overstated, and as someone who is picky about even a hint of melodrama, I was pleased and impressed.

Even though the book is a whopping 500+ pages, it feels like Green thought she didn’t have enough time or space. She does a lot of telling, not showing, as if she needed to make things as straightforward as possible. Her prose is likewise straightforward, serving its purpose without too many flourishes. I can’t say I mind, since it moves everything along at a reasonable clip, but I also can’t say it’s anything particularly special. It serves the plot, as do the characters, as does the world building, as do all the other elements. I look forward to the second installment building on these foundations and getting more to the heart of the issues Green has set up.