This was the first year I watched Eurovision, in no small part thanks to Catherynne Valente’s wonderful Space Opera. I think they owe her some royalties, or at least the chance to do publicity for them. If you’ve read anything by Valente, you already know how rad that would be. 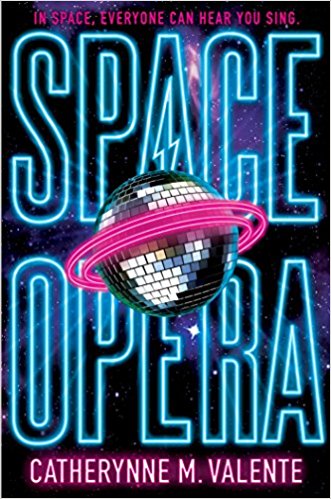 If you haven’t, Space Opera is a good place to start. While I’m partial to her Girl in Fairyland quintet, it’s true that the Fairyland books are technically for kids (albeit the way that Pixar movies are for kids, with plenty for adults to appreciate). Space Opera is for adults, since it touches on not just the usual PG-13 suspects of sex and death, but also middle-aged regret, impostor syndrome, and the general feeling of unease you start to have when Art and Joy and Glitter come up against Rent and Responsibility. May all children avoid these things as long as possible. May all adults who read Space Opera be comforted by Valente’s no-holds-barred thesis that Glitter still matters more than Rent.

Sometimes picking up a Valente book can be jarring, especially if you’re me and you’re used to more prosaic prose in your SF. I like plot. I like plot to happen rapidly, in reasonable succession. I am an ardent proponent of Raymond Chandler’s dictum on the fast clip (pun intended): “If your plot is flagging, have a man come in with a gun.” But the whole point of Space Opera is that the universe has tried guns, and found them wanting. Giant wars are not only tragic and terrible, they’re useless. Few things ever get solved with a war, and never for very long. What really solves the big questions is art, and thus, the intergalactic social and economic order is decided by a musical competition.

Clearly Valente cares about plot, too, but plot is secondary to language. It’s infinitely more important to her how she’s telling the story than just that she’s telling the story. Space Opera is the linguistic equivalent of a rhinestone-crusted feather-fuse gold-lamé-wheeled glitter cannon. Nothing else would do for such a story, and once I realized that (it was on page three or four, don’t worry), it was very fun to settle back and appreciate all the glitzy puns and double entendres and general verbal vogue-ing. This is a story about itself, all the weird and wonderful things humans do with language, as much as it is a story about Decibel Jones and the Absolute Zeroes in space.

Decibel Jones–aka Danesh Jalo–has thought a lot about space. His glam-rock persona, an omnisexual frock-coat-wearing sparkle diva, was inspired in part by his childhood bouncing dramatically between Marvin the Martian and B space horror flicks, and a general sense of alienation in all senses of the word. But when actual aliens show up and politely inform him and the seven billion other humans on the planet are going to have to prove their sentience via song, Decibel/Danesh isn’t sure his scarves and superlatives are up to snuff.

His bandmate–Oort St. Ultraviolet, aka Omar Calişkan–is even less enthused. Now living a respectable life of quiet desperation in the suburbs, Omar only wants to be normal. He does not want the dubious honor of representing humanity, even if the only thing he needs to do is make sure humanity doesn’t come in dead last. Literally. If he and Decibel can’t defeat even one other sentient species in the Metagalactic Grand Prix, the earth will be razed and all humans obliterated.

Even without all that pressure, Omar and Danesh have lost their shine. Their third bandmate, Mira Wonderful Star, died in a driving accident, and between grief and some terrible solo albums, their lives have never been the same. They have to find their respective and collective way back to becoming Oort and Decibel, also find a way to represent all of humanity, past, present, and future.

You know. No big deal.

Reading Space Opera, I did periodically and briefly wish that Valente would spend more time with these characters. I enjoyed the wildly imaginative asides, chapters about this or that other Metagalactic Grand Prix with pacifist flower choirs who win big and “telepathically linked, genetically identical, sociopathic knifeasaurus dictators” (159) who…do not. Valente is magnificently creative, and her multiverse is appropriately populated by some truly alien people and/or things. But Decibel and Oort are also wonderful, and more details of their lives would have been cool, too. Not in place of, but in addition to. In a story about intergalactic excess, too much is never enough, and I wanted this to be longer than it was. It’s hard being in the sugar crash phase that comes after such a rush.

In the end, this book is an all-marshmallow box of Lucky Charms. If you get queasy from all the sugar-color-crunch-rush you will at least barf rainbows, and goddamn you will have a good time.