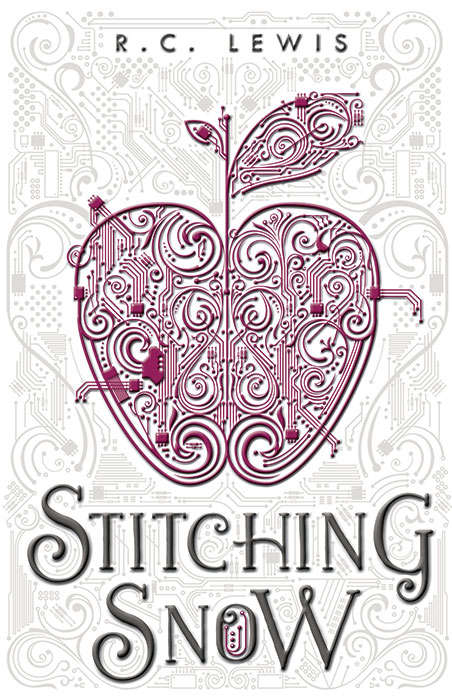 In Stitching Snow‘s version of the distant future, Snow White’s story begins with a cage match. Essie, alone in the ring with someone twice her size, surrounded by a crowd of men who want her to lose, shows us her wits and her grit right off the bat. And she only gets better from there.

In addition to fighting, Essie “stitches” for her living; creating drones and computer programs to help the miners on her wretched little planet survive and meet quotas. She lives alone except for her quirky cast of drones, each of whom has developed something of a personality from all the modifications she’s made. Her life is dangerous but bearable until a visitor crash-lands nearby, bringing a whole host of problems and complications with him.

She doesn’t want to help this mysterious Dane fellow, but she does out of a grudging sense of obligation. He repays her by violating her trust and whisking them off to places unknown, leaving them to fend off a variety of hostile forces in a galaxy ruled by not one but two evil monarchs, each their very own special blend of evil.

This is all extremely good until around the halfway point, when the romance starts to rear its bland, typical head. After revealing some key plot points, Essie goes from being a total badass to being “cool and all, but not as great as Dane.” It turns out that he’s a better fighter than she is, he’s as good with technology as she is (he even commandeers her drones!), and his extrasensory powers are more developed than hers. He saves her life over and over again, to the point where it becomes not only dull, but emotionally unsatisfying.

It might be easier to take if he were more interesting, but he’s your standard Prince Charming: he’s understanding, brave, handsome, talented, principled, devoted, and kind. Kids love him, the ruling council of his planet loves him, everybody loves him. There’s not a single quirk or flaw to make him human.

The recent trend toward serious, grittier YA is definitely good, and Stitching Snow does make some forays into real darkness. It doesn’t pull punches when it comes to the horrors of abuse, war, and of the corruption of power, making for some horrifying consequences and heart-wrenching scenes. These scenes all involve Essie and her bruised but unbroken spirit. It’s a book about her, and yet I only wish there were more of her throughout, and less of Dane–except when he is the source of hard moral choices about their respective goals.

Though full of action, there are clear political situations and ramifications they must navigate with every choice they make. These choices eventually lead them to a rather too-tidy attempt at a revolution, which makes for a quick ending but not a terribly satisfying one. There are some lingering uncertainties about the villains’ motives and about what each of them was truly responsible for, a welcome continuation of the themes of blame and forgiveness. Stitching Snow does meditate on how much we can (or should) forgive those who cause pain, since they are also motivated by their own traumas.

Read Stitching Snow for the protagonist, not the love interest.