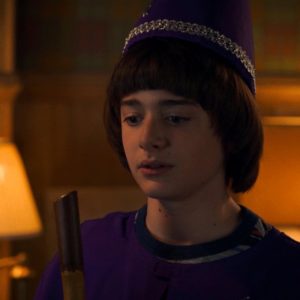 Poor Will Byers. While everyone else was having teenage drama (whether or not they were teenagers), all he wanted to do was play D&D. I sympathize, Will! In his honor, here are books to help you develop your cleric, and maybe help fight a Mind Flayer or two.

City of Stairs (Robert Jackson Bennett) – This is one of my absolute favorite books ever. What starts out as an already-dramatic tale of espionage and murder gets kicked up several notches once Bennett brings in religion. The main character, Shara, sees hints of divine cults and divine magic, which should be impossible. She would know: her uncle killed two of the gods, and paved the way for the slaughter of the rest. How, then, are miracles–horrible, terrifying miracles–still happening? And what could dead gods–or their followers–have planned for their conquerors? This is nonstop, high-octane mystery and action that proves that clerics can be just as fun to play as any other class.

Silent Hall (N.S. Dolkart) – This is the first volume in the Godserfs trilogy, and each book is better than the last. The trilogy follows five very different teenagers who are the only survivors of the destruction of their island nation. A goddess was responsible, and now other gods are meddling in their lives, some trying to help and some trying to kill them. They each have a unique role to play in the drama of the gods, and when they’re done they’ll change the very fabric of heaven. Also, bonus, the underlying themes are Jewish rather than pagan or Christian. 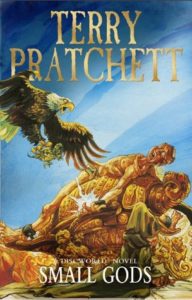 Small Gods (Terry Pratchett) – A classic of fantasy as well as a genuinely fascinating thesis on religion, Small Gods creates a world in which the gods sustain themselves on human belief. This is bad news for Om, who wakes up one morning to realize that the only true believer left is a poor boy named Brutha. What follows is like a boy-and-dog journey, except the dog is a really cranky god who takes the form of a turtle. The book is a critique of religious hypocrisy and people who go through the motions (and perpetuate the prejudices) of religion without understanding or faith, but also a romp through religious tropes that could inspire any number of clerics or campaigns.

Afterparty (Daryl Gregory) – five friends running a pharmaceutical startup accidentally unleash the world’s newest and weirdest drug: Numinous, the pill that will give you a divine rush. Users experience holy ecstasies and see visions that–probably–aren’t real, but the comedown can be deadly. Lyda, one of the inventors who is (literally) haunted by her failures, now has to find a way to save the innocent, before Numinous becomes a plague of Biblical proportions. This is perhaps less directly applicable to traditional D&D, but there are a number of other systems that could easily adapt this idea.

Crossroads of Canopy (Thoraiya Dyer) – One of the more original fantasy takes on religion in recent years, this book presents an entirely new pantheon in a truly unique setting. The story takes place in a massive primordial forest, beginning in the canopy where gods keep to their domains and confer powerful magic blessings on their followers. But it soon descends to the understory, where ancient gods still haunt the trees and offer dangerous powers. Unar is a spectacular protagonist, a woman with ambition as vast as the forest itself, and her encounters with reincarnating deities, magic artifacts, and strange monsters is truly epic.

American Gods (Neil Gaiman) – like his friend Terry Pratchett, Gaiman also puts forth the idea that gods need worshipers as much as (if not more than) worshipers need gods. This is a more mystical quest narrative than Pratchett’s straightforward boy-and-turtle journey, and it invokes folk beliefs far more than official theologies. The range of myths is impressive and the cast of secondary characters quite large, which could inspire any number of characters. 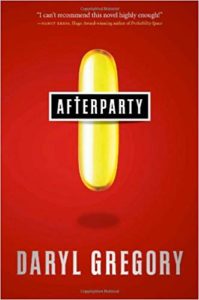 The Golden Compass (Philip Pullman) – I would love to see a campaign set in Lyra and Will’s multiverse, complete with daemons (hey, you can use the rules for familiars), witches, and armored polar bears. Who wouldn’t want to play as a talking viking bear? The catch would be that any clerics would probably have to be agents of the evil Magisterium, bent on fighting free thought and science. But there’s a lot of room for creativity here.

The Deed of Paksenarrion (Elizabeth Moon) – This is a lesser-known classic trilogy, but a classic all the same. It follows Paks, a young woman who starts as a sheepfarmer’s daughter (not even properly a sheepfarmer in her own right) and ends up as a paladin. Her path leads her into battle, into a gladiatorial arena, and into a hellish torture chamber. From each trial, she emerges with a more complex and deeper understanding of her own place in the world. It’s a rich and emotional journey that also has plenty of action.