After reading The Black God’s Drums, I was extremely excited when I heard about this novella’s release. My expectations were incredibly high, and P. Djeli Clark not only met but shattered them. It was fun and thrilling, but also heartfelt and thoughtful. The novella is about Hamed Nasr and Onsi Youssef, agents of the Ministry of Alchemy, Enchantments, and Supernatural Entities, attempting to remove a spirit from Tram Car 015 which has been attacking female commuters. At first, the case seems to be a run of the mill djinn possession, but quickly turns into a more complicated situation. Through twists and turns and chance meetings, the duo experience an entire other side of Cairo that they had no idea existed.

The author has a knack for bringing characters to life. Even if the character could be typical or stock, he always adds just enough levels of richness to complete flesh them out. Agents Hamed and Onsi are perfect examples of this. The author uses a standard setup: Hamed, the seasoned seemingly jaded partner, pairs with Onsi, a bright eyed new recruit, in a way that feels real. Hamed was enjoyable, and Onsi absolutely warmed my heart. His wealth of knowledge with his ability to be informative yet not condescending caused me to gravitate towards him. I found myself smiling and laughing every time he was on the page. 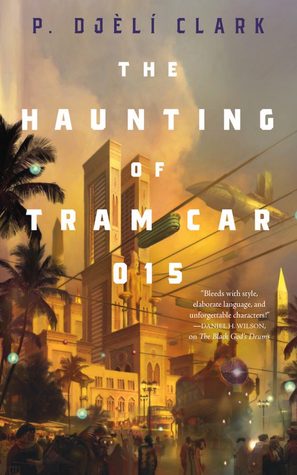 Set in an alternate Cairo in 1912, the main plot line is fun and witty, and Clark touches on tougher issues such as women’s equality and spiritual expression. The Egyptian Feminist Sisterhood seeks to have a law passed to allow women to vote. There are multiple times the author allows the protagonist’s thoughts to deepen on the issue.

The two agents have a meal at Makka, a Nubian restaurant, to get to know one another better and discuss their options for removing the violent spirit from the tram car. When describing how Hamed feels about top agent who happens to be a woman, Clark sets the stage for his beliefs:

“Not that he begrudged her such success either. There were some in the Ministry unsettled with a woman achieving such stature. But he prided himself on being a modern man, not given to outdated sentiments.”

When the waitress, Abla, appears to take their order, Hamed is surprised by her clothing.

“He turned to find a tall young woman. Unmistakably Nubian, and striking, with curly black hair that peeked from beneath a yellow hijab. But what had him gaping like a fish was the rest of her clothing. She wore the common patterned Nubian dress, but the garment ended at her knees, held up at her shoulders by silver clasps. Beneath, she had on what looked like tight-fitting tan breeches, tucked into long leather boots. She stood there staring down at them expectantly.”

It’s not that she’s wearing pants, but that she’s paired them with traditional dress. This Cairo is technologically advanced, yet there seem to be traditional expectations of women in this society. When Abla first approaches, Hamed immediately thinks he doesn’t want Onsi to think he keeps company with unfamiliar women. The melding of cultural advancement and traditional values is evident within this specific character but also serves as a larger backdrop of the entire narrative. Abla is a good example of things that, despite seeming at odds, exist in harmony.

While serving them, she suggests they use the Zar ceremony to be led by a sheikha to rid the tram car of the spirit and even provides the woman’s address.

“The callers were all women, beseeching ceremonies for every manner of thing: fever sickness, childlessness, depression, addiction, ill fortune. The list was endless, and the two operators were forced to keep up a busy pace. It was a stunning revelation, and he wondered how many thoroughly modern Cairene women were in the privacy of their homes participating in what as often publicly dismissed as backward superstition. The Ministry had obviously grossly underestimated the ceremonies popularity.”

The Ministry is focused on the supernatural, and exists in harmony with Islam and Christianity. Hamed realizes that more women than he originally thought are both engaging in organized religion and non-religious spiritual practices. This continues the theme of coexistence that reverberates throughout this narrative. In many works featuring the occult the reader or watcher will see these belief systems at odds, but Clark creates a seamless synergy which reflects, in my opinion, an ideal reality in which people of different beliefs can respect one another and coexist.

This revelation allows Hamed to enter Sheikha Nadiyaa’s office humbly to request assistance. The duo approaches her respectfully; however, she initially declines their plea explaining the true purpose of the Zar ceremony,

“The Zar is not a ceremony to drive out spirits. We assess each woman to understand the nature of her affliction. It could be that the possessing djinn has been stirred by the woman’s actions or some disruptive presence … We are not exorcists.”

Agent Onsi uses his knowledge to plead a better case for her assistance:

“Given that, I submit the tram is little different from a person who suffers an affliction and needs your help. Did not the earliest Sufi masters write that to practice generosity was the foremost in achieving spiritual perfection?”

This continues the conversation which eventually ends in Sheikha Nadiyaa accepting their proposal. The Zar reveals more information about the spirit and we find that it’s not a djinn at all but something different that requires an even more unorthodox approach. The climax is thrilling, fast paced leading to an enjoyable conclusion.

Clark is no stranger to “less is more.” Though this novella is 130 pages, the plot never feels rushed and neither is anything left out. He uses great precision in his storytelling to to make the most of each single sentence.

The world building is impeccable. The way Clark dropped the world’s relevant history into the current timeline was  immaculate. This author is surgical in his style of writing. He gets in, tells a story, and gets out, leaving the reader satisfied yet wanting more. Middle school me wants to seriously write fanfiction. I can’t wait to see if more stories will feature Agent Hamed and Onsi.