There’s a quote from Angela Carter’s “The Tiger’s Bride” that I particularly like:

“The tiger will never lie down with the lamb; he acknowledges no pact that is not reciprocal. The lamb must learn to run with the tigers.”

This is, of course, a riff on Isaiah’s oft-misquoted poetry about—not the lion and the lamb—but wolves and leopards and bears being as mild as calves and lambs. Isaiah’s bit is a few lines, but it endures, enshrined with huge and symbolic hope. Carter’s short story is a few dozen pages and inverts the paradigm, making a darker peace with desire.

And by virtue of its title, we also have this novella by Margaret Killjoy. It inverts a different paradigm, taking both innocence and its perversion together, making a stag into a carnivore, but in so doing making that abomination into an avatar of justice. The deer kills those who seek power over the powerless. It did so once in Freedom, Iowa, and now it paces the bounds of the town, and no one is quite sure what kind of justice it understands—or metes out.

It also makes the magical…mundane.

The main character, Danielle, arrives in town after an unsettling trek through the forest and with the unpleasant goal of unraveling the truth behind her friend’s suicide–and she immediately goes to sleep. But all right, it’s been a long trip. She’s tired. Sure. And when she wakes up, she accepts and is accepted by the local community of punks who have built a squatter’s paradise. Immediately. Which, okay, is part of their deeply held philosophy of egalitarian anarchy. I’ll buy it. 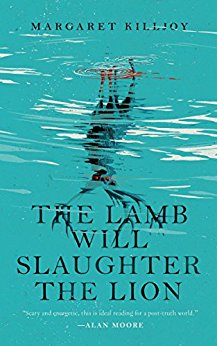 And everything is great—except for the supernatural murder. Which happens directly in front of her, almost immediately, and provokes very little intervention from anyone else. Danielle reacts with what I would say is a pretty reasonable amount of fear and disbelief, flinging crockery and making a halfhearted attempt to keep magic in the realm of the unreal for a little longer. But the others immediately explain what happened in a way that leaves no space for doubt or wonder, and gives no indication of their personalities. They summoned a spirit to protect them from a man who had taken over their commune. It has stuck around and it’s apparently going to kill more people.

There’s something kind of nice about the history being laid out like that—no contrived parceling of information, no withholding for the sake of withholding. But they’re just so matter-of-fact about it. It’s bizarre, and not in a way that serves the atmosphere. It’s not a self-aware blasé, but one that seems born of what seems like impatience. Did the author want to get the story going, or get it over with? I can’t tell.

“’I suppose we’re going to a funeral,’” one character says, without a description of her outward mannerisms or her inner thoughts. The dialogue drops like a wrench on the floor: a useful thing, but not put to any use. Is she scared? Angry? Hiding something? Does she seem insightful, oblivious, uncaring? We don’t know. All we know is, there’s a funeral. They are going. We’ve connected point A to point B with a straight line, the shortest and least compelling route between those two things.

It’s painful to see it written this way because the characters seem like they could be interesting (I mean, Doomsday and Thursday, a couple casually referred to as “the Days”? That’s so cool. Give me more of that!), and the spirits and zombies are definitely interesting, but they don’t really connect. I don’t know anything about the anarchist-punk subculture, but Killjoy isn’t very interested in telling us more about it. Nor about the spirit world, which is this untapped and vaguely alien mythos that gets hardly any attention or elaboration at all.

More and more we have to learn to live in realities that are hostile to us, and a bunch of punk anarchists would know that better than most. Add in the supernatural and there’s a lot of fertile ground to explore. Power, innocence, justice—those are huge concepts to bring crashing into evolving realities of community and politics. This novella makes those spiritual ideals into a creature with horns and teeth, and sets it to wreak havoc on a community of imperfect idealists.

Except it…doesn’t. The havoc is fairly contained. People coexist with this strange new god and don’t seem to have insights into its workings or their own. Danielle’s reaction to standing by a house with a dead woman inside and the demonic deer on the grounds is, “What a fucking day.” And not in a funny, deadpan way. That’s just her only thought. Is the author making a commentary that those on the fringe of society are, ironically, more likely to maintain the essentials of civilization when faced with a cataclysmic shift than those who participate in mainstream society? Or is she saying that those with lofty ideals are ultimately brought down by those ideals? Or maybe she’s arguing for greater pessimism, that ideals can’t exist in the real world without becoming horrific. Or is it optimism—that our imperfections are ultimately better than some brutal perfection?

In the end she just comes out and says what the message is—I won’t spoil it, but it’s about what you might expect. It’s straightforward and it’s reasonable. I don’t even dislike it. I don’t dislike—in theory—any part of this novella. It’s merely, in the end, a story with some cool images—an anarchist commune, a vengeful heart-eating deer, ritual on the summer solstice—and a circumscribed set of concepts that it will and will not consider. The plot happens. The images are conveyed. The romance is cute. The denouement is climactic but the emotions are minimal, and it lacks any ambition to delve further than that. It’s a diversion. To be fair, I was indeed diverted (for the length of the book and the writing of this review). But now I’m back to where I was, and I don’t know that I’m any different for it.
The Lamb Will Slaughter the Lion comes out August 15.