A Winter’s Promise was one of those rare books that stood at the exact intersection of nostalgia and innovation. It had the feel of a 20th century classic of children’s literature, but invested with the insight and maturity of more modern YA. I was beyond excited to get my hands on the second installment (of four) now that it’s been translated from the French, The Missing of Clairdelune.

The “missing” of the title are various odious people snatched from the seemingly inviolable sanctuary of Clairdelune. They each have opposed various reforms aimed at greater inclusion and protection for the non-aristocrats—all except for one.

Ophelia has been getting letters, too. 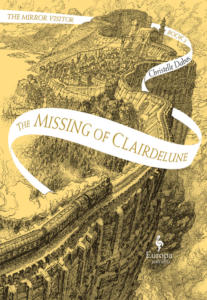 Yes, our plucky and klutzy heroine is in greater danger than ever before, now that she is openly participating in the Pole Court. Her engagement to Thorn, the sullen and meticulous head of the Treasury, makes her more of a target, not less, and her being a foreigner…well. In a place where courtiers hate their own families only slightly less than other families, someone with no family at all is as vulnerable as she is despised. She’s easy prey, to be sure, but all the other victims were taken from locked rooms and guarded suites. She’s not a threat and she’s not even a challenge. So why does the writer hate her enough to declare that “God doesn’t want you here”?

The letters claim to be speaking for God, but few people even recognize such an entity. If they think of higher powers at all, they think of the Familiar Spirits, massive immortals of great supernatural power. They might be the progenitors of their Arks, but their long years have wrung out any benevolence, leaving them capricious and obsessive. Each not only has a magical domain, but a peculiar range of interests from which they will not deviate. But whether consumed by astronomy or transmutation, they are united by their fascination with their Books and with their dim recollections of the cataclysm.

Farouk, the Pole spirit, has an amnesia so profound that he must rely on written records for even the most fundamental details: “your consort is Berenilde,” “you promised to protect Ophelia,” and so on. But it is another Book that consumes his intermittent attention, the Book each Familiar Spirit possesses but cannot read or understand. These Books are artifacts of the cataclysm, powerful somehow but written in an unreadable language. They are dreadfully important, but no one—not even the Familiar Spirits—know how or why.

Ophelia might be able to “read” Farouk’s Book with her psychometry, but she becomes concerned about what she might find. The threats on her life may be in line with a wider, more insidious conspiracy that might span multiple Arks. Many powerful people are dead-set against exploration of the pre-cataclysmic past, whether that means investigating records or artifacts. Clearly there is something terrible hiding in the past, something that is related to the unknown God and to the “missing.”

The interlocking mysteries and threats are carefully handled, never overwhelming the narrative and never dumbed down, either. Ophelia is both thoughtful and capable, and fortunately Dabos never pushes her to be anything other than what she is, namely, a shy archivist. She gets tongue-tied and is no real help in a fight, but she never gives up her curiosity and she learns to stand up for herself against even the worst bullies. I appreciate this kind of consistency, since it makes Dabos’s characters more real. Some of the supporting cast tend toward wackiness, much like in Alice in Wonderland, but the major characters (Ophelia, Thorn, Berenilde) keep that touch of surreality from overwhelming. 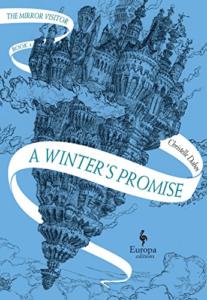 Ophelia and Thorn’s stilted, awkward relationship is now in its second book and, after almost a thousand pages, I can’t say I’m entirely thrilled with the speed at which it has progressed. It would, however, make an excellent anime, since the two are absolutely devoted to the idea of not talking to each other and instead letting little misunderstandings build up. (Actually, given the combination of incredible visuals, understated magic, and slightly wacky circumstances, this would make an excellent Miyazaki movie.)

The constant sense of menace is punctuated by moments of humor or wonder to keep it from becoming overwhelming, but the book still overall has a strong urgency that drives everything forward. It feels far shorter than its rather hefty 540 pages, although the middle portion of the book drags somewhat, as we are constantly distracted from the central mysteries—the Book, the missing persons—by other dramatic interludes. Burlesque owners, disgruntled family members, assassins, guards, and seemingly the whole and sundry of society pop in and out of Ophelia’s life, but very few provide the details necessary to keep the main mysteries moving. Ophelia also does little deduction of her own, and so the book is a bit overstuffed and underfocused as a single volume.

However, the whole quartet seems to be one of those series that is really one large book, subdivided, rather than four individual installments. It’s unfortunate that these are released on an annual schedule, since it gives the impression that they’re much more distinct than they really are, and gives us time to forget. Really, this is more of a huge epic, Game of Thrones meets Alice in Wonderland, and now that there are two volumes out, there’s no better time to jump in.

The Missing of Clairdelune will be published May 7.